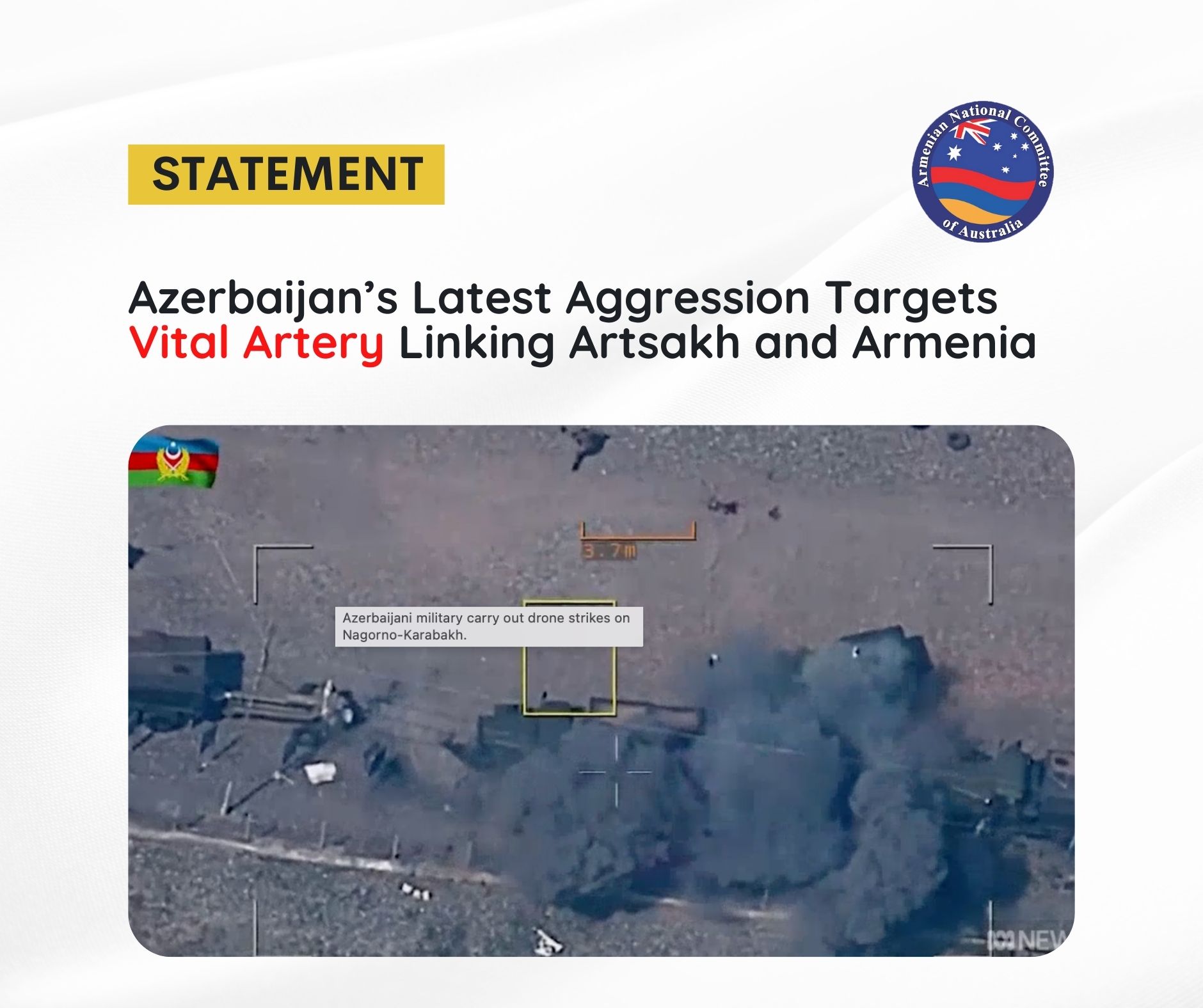 The 2020 Nagorno Karabakh War never ended and it is beyond time that Azerbaijan is called out for its continued aggression against the indigenous Armenians of the Republic of Artsakh.

Armenians around the world strongly suspected that Turkey, the unrepentant and unashamed successor state of the Ottoman Empire which committed and denies the Armenian Genocide, and its proxy state, Azerbaijan, were never going to be content with occupying 70% of the Armenian Republic of Artsakh. The autocratic leaders of these virulently hostile neighbours, who have unilaterally blockaded Armenia for decades, have taken the baton to achieve the Pan-Turkic goal of their forefathers: the complete erasure of Armenians and their cultural and religious presence of thousands of years from the ancestral Armenian homeland.

Azerbaijan committed another offensive against the Republic of Artsakh in recent days, representing Baku’s most significant violation of the 2020 Russian-brokered ceasefire agreement since the end of the 44-day war.

Skirmishes first broke out on 27th July 2022, with shootings targeting positions of the Artsakh Defence Army near civilian settlements around the Marduni region. By 1st August 2022, Azerbaijan’s criminal behaviour intensified attempting to illegally cross the line of contact in the south-western regions of Artsakh, grossly violating fundamental human rights of the civilian population and breaching the November 9 2020 ceasefire agreement.

The most serious violation was recorded over the last three days in the north-western region of Artsakh and the Berdzor (Lachin) corridor, resulting in the death of two Armenian servicemen and leaving 19 wounded, according to the Artsakh Healthy Ministry. Moreover, Azerbaijan’s Defence Ministry boasted about their attacks with videos posted to social media.

It is significant to note that the Berdzor (Lachin) corridor is the only remaining artery connecting Armenians of Artsakh to their life support, the Republic of Armenia, including their access to gas, electricity and telecommunications.

Whilst we appreciate the candidness and honesty of the Russian Defence Ministry and peacekeeping contingents stationed in the Republic of Artsakh, who verified and publicly called out Azerbaijan as being responsible for this most recent––and repeated––egregious violation of the trilateral November 2020 cease-fire agreement, the international community unfortunately remains indifferent.

When they are not silent, their engagement on the issue is limited to “copy and paste” statements, non-targeted language, calling for restraint from “both sides”, and ultimately ignoring the reality that there is only one genocidal aggressor in this conflict.

Rather than sanctioning Turkey-backed Azerbaijan for its overtly aggressive Armenophobic policies against the indigenous Armenians of Artsakh, international appeasers of the belligerent petro-dictator Aliyev embolden him to continue aggressive policies by rewarding him with accolades in efforts to secure oil and gas deals.

In contrast to conflicts around the world, the statements are clear only in their double standards, blinded by political interest, risking the credibility of even well-respected inter-governmental bodies such as the European Union and the United Nations.

Underlying the continued military aggression and state terror by Azerbaijan are reports indicating that the attacks over the last week are premeditated and calculated, with the aim of forcing the Armenian Government into further concessions that go beyond the scope of the November 9 ceasefire agreement.

Today, Azerbaijan demands the closure of the Lachin (Berdzor) corridor, the vital artery and only remaining land route connecting Artsakh to Armenia and the outside world. The trilateral agreement stipulates the timeframe as November 2023 to agree on an alternate route for part of that corridor to be controlled and protected by the peacekeepers. Yet, through the use of brute force, Azerbaijan intends to corner the Republic of Artsakh’s authorities into accepting concessions not stipulated in the November 9 truce accord.

The Australian Government, as part of the international community, should unequivocally call for a stop to Azerbaijani aggression and support the continuation of the only route to lasting peace in the region. This peace will not come through forced concessions by Armenia, as they will be forever rejected by Armenians in Australia and the world over. This peace will come through a negotiated settlement through the United Nations Security Council sanctioned, OSCE Minsk Group, respecting the clearly delineated and agreed principles of equal right of self-determination, territorial integrity and the non-use of force, which Azerbaijan continues to flagrantly breach.

Until that time, it is every single Armenian’s duty to advocate in support of the over 100,000 Armenian inhabitants of the Republic of Artsakh who refuse to kowtow to a foreign occupier and brutal aggressor. We will ensure to advocate, and must do all that we must, for the protection of their fundamental human rights, including the right to self-determination and to live in peace and security on their ancestral lands.