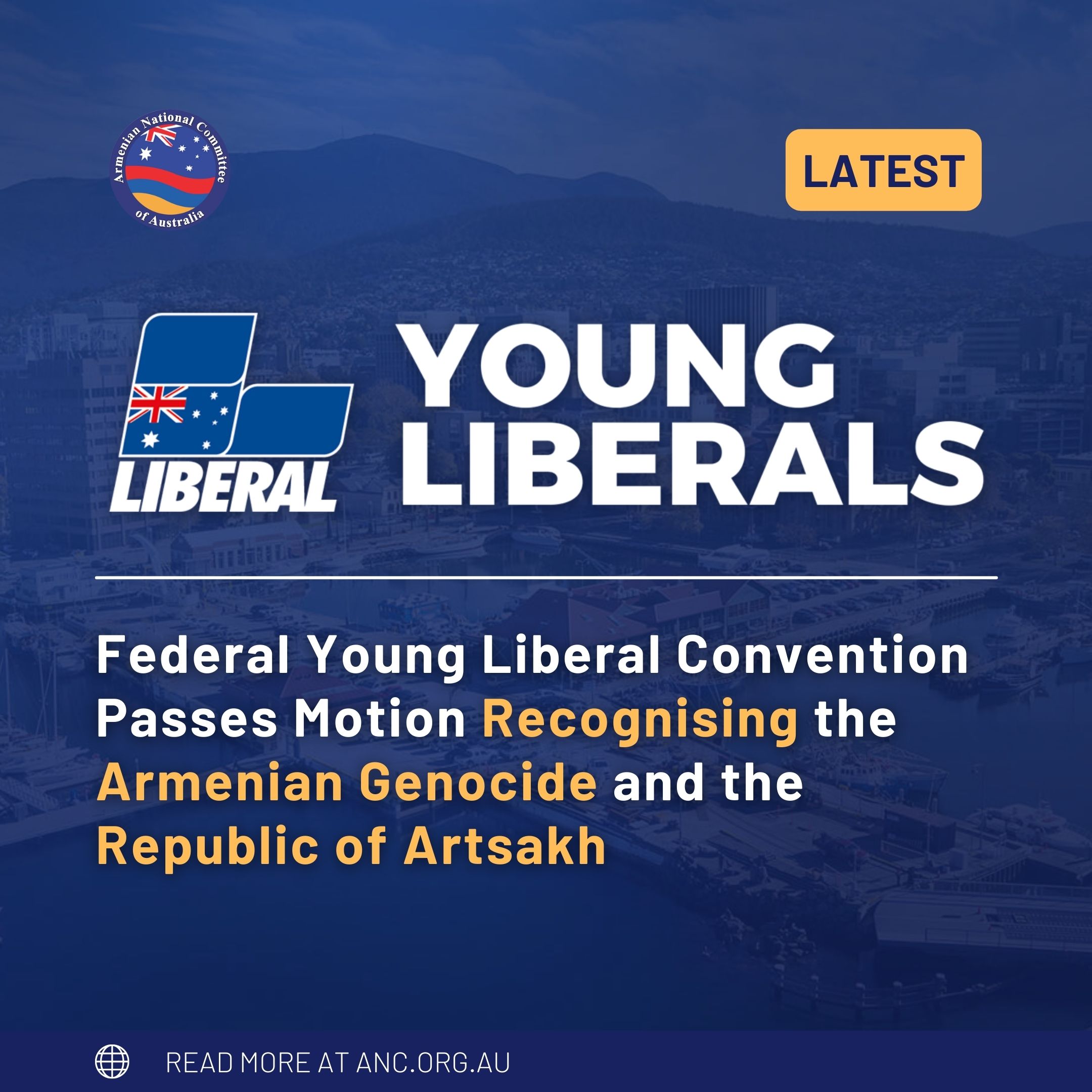 HOBART: The Young Liberal Movement of Australia has unanimously adopted a motion at its National Convention recognising the 1915 Armenian, Assyrian and Greek Genocides, as well as acknowledging the rights to self-determination of the indigenous Armenian people of the Republic of Artsakh, reported the Armenian National Committee of Australia (ANC-AU).

The Young Liberal Movement is the youth wing of the Liberal Party of Australia, which is one of two major political parties in Australian politics and currently the party in Government federally, led by Prime Minister Scott Morrison.

The adoption of the motion demonstrates the growing discourse in Australian society supporting national recognition of the 1915 Genocides, which contrasts with the policy of the Morrison Government, who have continued to placate the denialist Turkish Government with the use of euphemisms instead of the word “genocide” when referring to the Ottoman massacres against the Empire’s Christian minorities.

Significantly, the motion also ensures the Young Liberals support the rights to self-determination of the Republic of Artsakh, which is currently under occupation by Azerbaijan following their attacks on the independent Armenian-populated state in 2020 during the Nagorno Karabakh War.

The 2022 Young Liberal Federal Convention was held from January 21 – 23, 2022 at the Hobart Convention and Exhibition Centre at the Hotel Grand Chancellor, with 44 voting delegates participating from six states and the Australian Capital Territory.

Andreatidis’ motion not only recognised the 1915 crimes committed by the Ottoman Empire, but also called on the “Federal Government to recognise and condemn the Armenian, Assyrian and Greek Genocides”.

His motion also linked the Armenian Genocide to contemporary acts of aggression, notably Azerbaijani hostilities against the Armenian nation witnessed in September 2020 and the pan-Turkic attempts to ethnically cleanse the Nagorno Karabakh (Artsakh) region of Armenians.

Andreatidis’ motion called on the Federal Young Liberals to “recognise the right to self-determination of the Armenians of the Republic of Artsakh, and that the recent and ongoing attacks against the Republic of Artsakh by Azerbaijan, backed by Turkey, are part of an ongoing legacy of Genocide and genocide denial”.

ANC-AU Executive Director Haig Kayserian welcomed the support of the Australian Young Liberal Movement and thanked them for adopting the motion.

“This motion saw future leaders of our nation call out their current leaders by taking a unanimous stand in solidarity with the Armenian-Australian, Assyrian-Australian and Greek-Australian communities by addressing past and current injustices that remain unpunished,” Kayserian said.

“Thanks to the leadership of Mr Connor Andreatidis, some of the most politically active youth from around the country and members of our Prime Minister’s own party have sent a collective, clear and unequivocal message that we must face our future challenges by recognising and condemning past injustices wherever they may take place,” Kayserian added.

“We thank Mr Andreatidis and past and present Young Liberal members who have supported this and similar motions which continue to demonstrate their ongoing commitment to advancing issues important to our communities.”

In August 2020, the ACT Young Liberals passed a similar resolution recognised and condemning the 1915 Armenian, Assyrian and Greek Genocides and the right to self-determination of the Republic of Artsakh (see here).