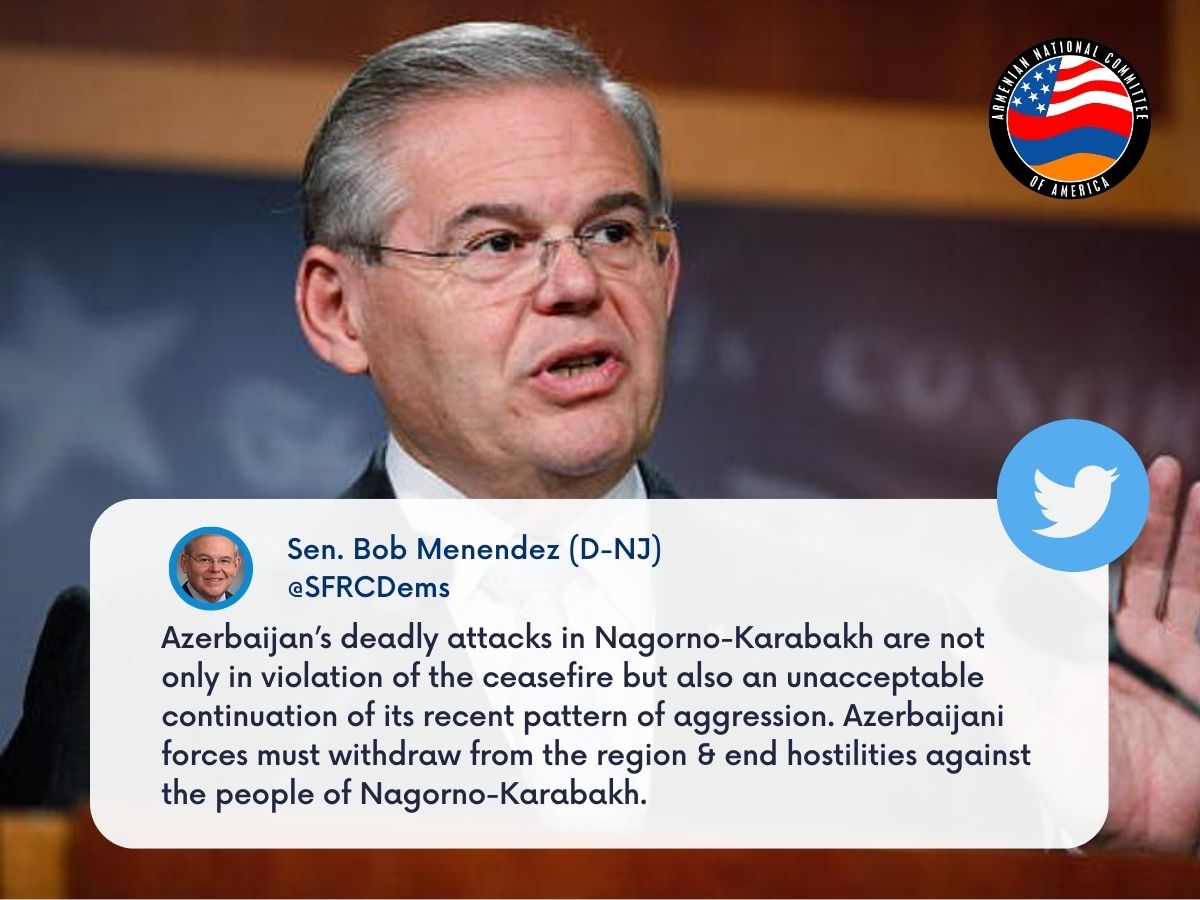 In the wake of renewed Azerbaijani attacks – on the eve of Aliyev’s most recent bid to ethnically-cleanse Artsakh and sever its links to Armenia – Members of Congress are demanding that the Biden Administration confront Baku’s belligerence by cutting off U.S. military aid to Azerbaijan, reported the Armenian National Committee of America (ANCA).

“The Biden Administration – using our American tax dollars – is today materially contributing to the Azerbaijan military’s ethnic-cleansing of Artsakh, morally emboldening dictator Ilham Aliyev as he seeks to strangle Artsakh by cutting off the Lachin Corridor,” said ANCA Executive Director Aram Hamparian.  “We thank each Senator and Representative who has raised alarms about Azerbaijan’s actions and join with them in demanding an end to American complicity in Azerbaijan’s genocidal drive to rid Armenians from their ancestral, indigenous Artsakh homeland.”

Hamparian issued a live call to action on the ANCA’s Facebook and Twitter platforms last week urging supporters of Artsakh freedom to call the White House and urge President Biden to enforce U.S. sanctions on Azerbaijan and stop sending U.S. military arms and aid to the brutal Aliyev regime.  Advocates can take action by visiting anca.org/907 and anca.org/907call.

Senate Foreign Relations Committee Chair Bob Menendez (D-NJ) called for the withdrawal of Azerbaijan troops, tweeting “Azerbaijan’s deadly attacks in Nagorno-Karabakh are not only in violation of the ceasefire but also an unacceptable continuation of its recent pattern of aggression. Azerbaijani forces must withdraw from the region & end hostilities against the people of Nagorno-Karabakh.”

Senate Foreign Relations Committee Republican Marco Rubio concurred, noting “Troubling violence is escalating in the ethnic Armenian Nagorno-Karabakh region. #Azerbaijan must immediately put a stop to this conflict and work with #Armenia to reach a peaceful end to this dispute.” 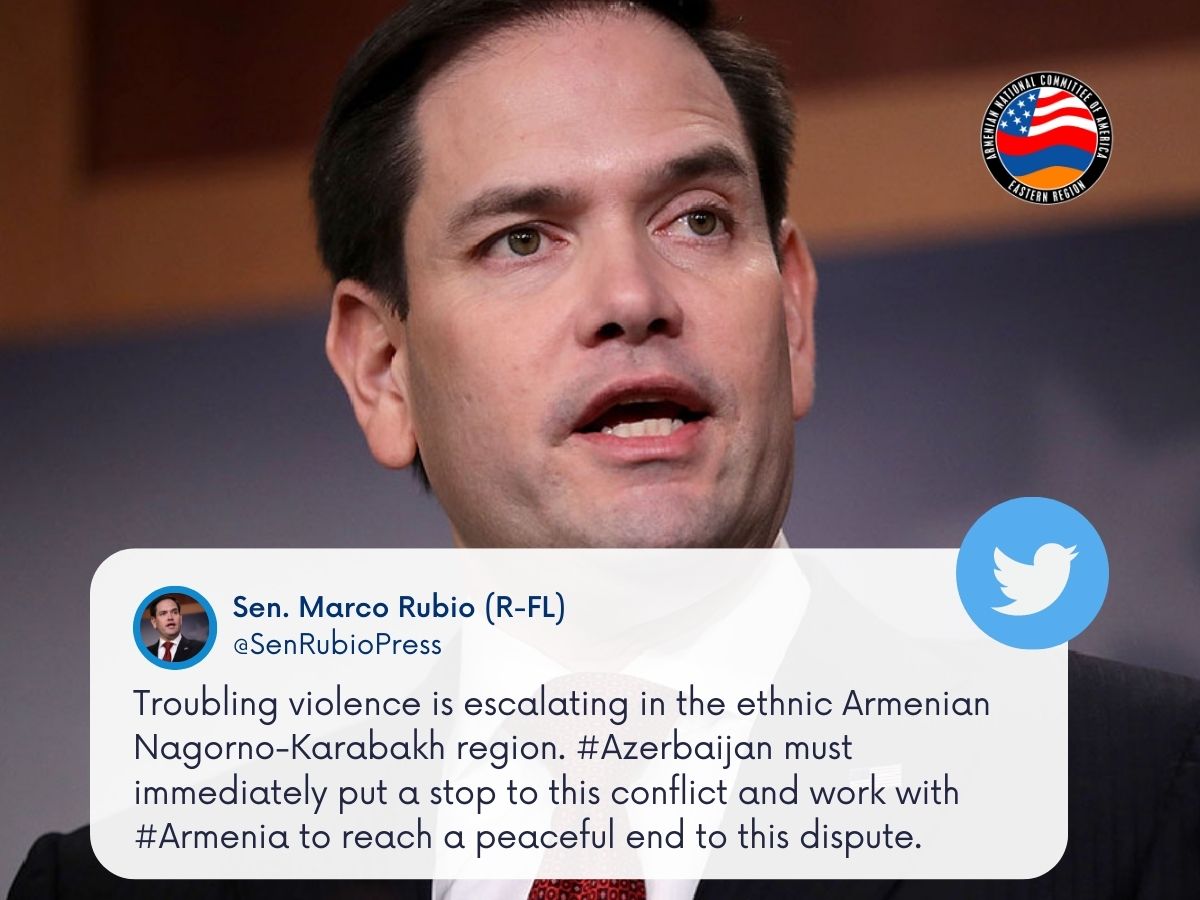 Senate Armed Services Committee Chairman Jack Reed (D-RI), called Azerbaijan’s public relations campaign rejoicing in the killing of two Artsakh servicemen “reprehensible.”  In his tweet, Sen. Reed stated, “I am deeply troubled by reports of a return to violence in Nagorno-Karabakh, especially the loss of life. For the Azerbaijani Ministry of Defense to release footage of their air strike, as though it is something to be proud of, is reprehensible.” 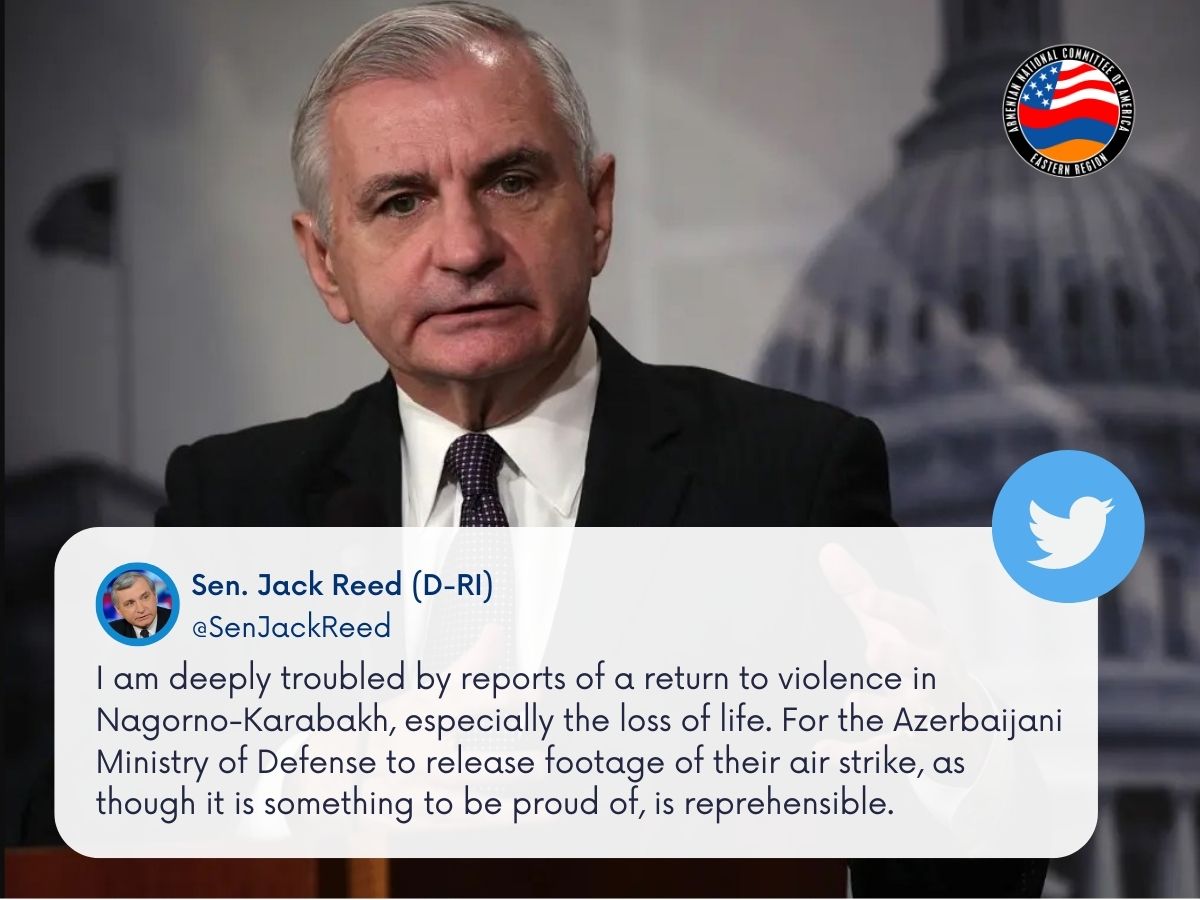 Rep. Clark tweeted, “Yet again, Azerbaijan is shamelessly violating the ceasefire agreement with Armenia. The State Department must hold the Aliyev regime accountable for its attacks on Artsakh. It is vital that we stand up for the innocent lives at risk, the sovereignty of Armenia, & secure peace.”

Rep. Eshoo noted, “Azerbaijan’s deadly drone strikes against Artsakh are a blatant violation of the 2020 ceasefire. I strongly condemn Azerbaijan’s aggression & urge
@StateDept to use every diplomatic tool available to prevent further escalation, including suspending U.S. military aid to Azerbaijan.”

Rep. Krishnamoorthi emphasized that “There is no place for the violent attacks that we are seeing from Azerbaijan. I urge the Aliyev regime to cease all attacks on Artsakh, and to return to the negotiating table to find a peaceful settlement for all parties.”

Rep. Lawrence urged the State Department to “use every diplomatic tool at our disposal to prevent further atrocities like this attack.”

Rep. Sanchez was disturbed by news of the attacks and condemned Azerbaijan’s unprovoked actions, tweeting, “I am disturbed by reports that Azerbaijan has violated its ceasefire agreement & launched an unprovoked attack on the people of Artsakh. I strongly condemn Azerbaijan’s aggression, & I join the international community in calling for an immediate end to hostilities in the region.”

Rep. Schakowsky demanded Azerbaijani accountability “for yet again violating its ceasefire agreement with Armenia. I urge the State Department to use all of its diplomatic tools to hold the Aliyev regime accountable for its attacks on Artsakh and to prevent future atrocities.”

Rep. Schiff issued a statement on the Azerbaijani attacks, noting, in part, “In this year’s national defense funding legislation and for years past, I have repeatedly called for the immediate release of all Armenian prisoners of war and captured civilians, tens of millions in humanitarian aid and economic assistance for Artsakh, a full prohibition on U.S. security assistance to Azerbaijan, and renewed American engagement through the OSCE Minsk Group to reinvigorate the peace process. Each of these actions is critical to defending the Armenian people, and sending a resolute message that America can and will defend democracy around the world.”

Rep. Sherman was emphatic about the disastrous effects of closing the Lachin corridor, tweeting, “Allowing Azerbaijan to cut off the Lachin corridor would jeopardize the security & freedom of ethnic Armenians living in #Artsakh. It is not enough to just condemn this ongoing aggression – the United States must model its values by ending U.S. military aid to Azerbaijan.”

Responding to constituent concerns, Rep. Trahan tweeted, “I’ve heard from many Armenian Americans in #MA3 who are rightly outraged by Azerbaijan’s latest violent attack that has led to tragic and unnecessary loss of life. The U.S. and our allies must condemn this violence and work diplomatically to prevent future escalation.”

Congressional concerns come in the wake of Azerbaijan’s demand that Armenian residents of Aghavno and Berdzor – located in the strategic Lachin corridor connecting Armenia and Artsakh – leave their homes by August 25th.  This is the latest in President Aliyev’s efforts to ethnically cleanse Artsakh’s Armenian population.  The Lachin corridor is Artsakh’s lifeline to Armenia and the world, serving as the primary artery for travel as well as communication, trade, and energy.  Aliyev’s proposed route from Armenia to Artsakh traverses primarily Azerbaijani-occupied territory, making travel unsafe for Armenians and impeding normal trade and communication.   A short explanatory on the importance of Berdzor, Aghavno, and the Lachin Corridor was prepared by the  Armenian National Committee of Artsakh and is available at: https://anca.org/assets/pdf/080822_LachinCorridor_Importance.pdf