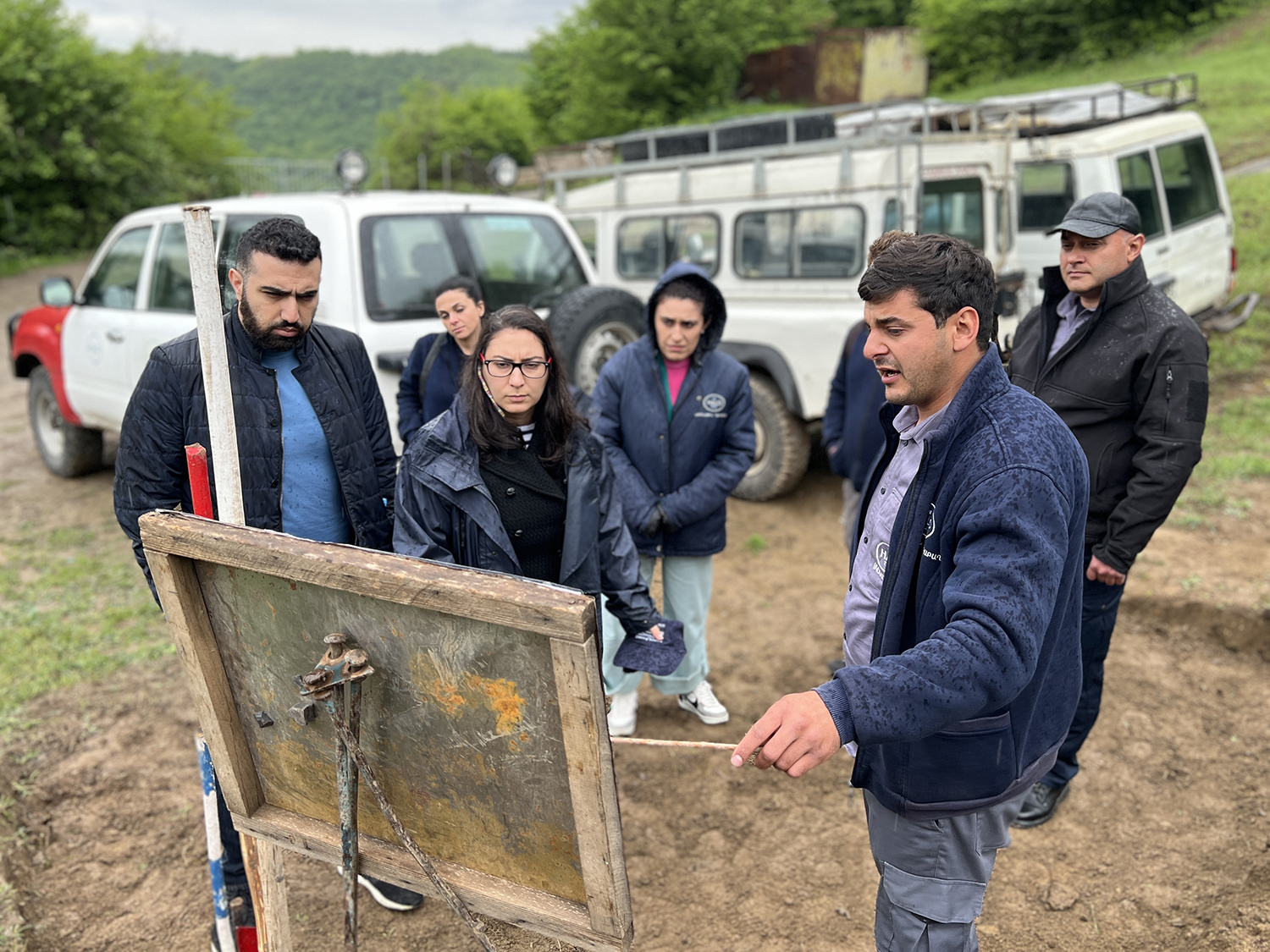 ANCA Government Affairs Director Tereza Yerimyan, IT Director Nerses Semerjian, and Programs Director Alex Manoukian were joined by the ANC International’s Gevorg Ghukasyan in a week-long fact-finding mission to Artsakh.  While there, they worked closely with the ANC of Artsakh, which was launched in September 2021, to focus on protecting the rights of Artsakh’s citizens, securing international recognition of the Artsakh Republic, and restoring Artsakh’s territorial integrity. The visit took place as the ANCA ramps up advocacy for pro-Artsakh priorities in the Fiscal Year 2023 Foreign Aid Bill and FY2023 National Defense Authorization Act.

“Artsakh’s security and sovereignty are the ANCA’s top advocacy priorities,” explained Yerimyan. “We appreciated the opportunity to speak with government officials, as well as civic and community organizations to understand Artsakh’s challenges firsthand in order to better advocate for policies that will ensure the safety of the people of Artsakh and ensure their right to determine their own destiny on their ancestral lands,” added Yerimyan.  “We look forward to sharing insights about the long-term effects of the 2020 war and ongoing Azerbaijani aggression with U.S. officials, as we continue to work to end U.S. military aid to Azerbaijan and expand U.S. aid to Artsakh.”

The ANCA team discussed Artsakh’s geopolitical challenges with Foreign Minister David Babayan and shared the ANCA’s current federal level efforts calling on President Biden to maintain FREEDOM Support Act Section 907 restrictions on U.S. aid to Azerbaijan and Congressional efforts to block any additional military assistance to the dictatorial Aliyev regime.  Yerimyan also outlined the ANCA’s work with the Biden Administration and members of Congress to secure sanctions against Azerbaijan and Turkey for war crimes committed during their 2020 attack on Artsakh and Armenia. The ANCA’s work with groups like the Armenian Legal Center for Human Rights and Justice to impose international political and legal pressure on the Aliyev Administration to release over 200 Armenian prisoners of war was also discussed, among a broad range of pressing topics.

During meetings with Artsakh Republic Minister of Social Development and Migration Armine Petrosyan, the ANCA team learned new details about the plight of the 100,000 Armenian refugees forced from their ancestral homes during the 2020 war, and efforts to assist their return to Artsakh. They discussed the important role expanded U.S. assistance to Artsakh would play in the everyday lives of Artsakh Armenians and ongoing Armenian American community efforts to secure $50 million as part of the FY2023 Foreign Aid Bill. The ANCA team also met with Artsakh representatives of the Armenian Relief Society (ARS) and Hamazkayin Armenian Educational and Cultural Association to learn about their programs on the ground to help families affected by the war.  Among programs discussed were the ARS “Stand with an Artsakh Family” relief project and Hamazkayin’s “Children of Artsakh” initiative.  During an uplifting visit to the ARS Soseh Kindergarten, the ANCA team was treated to special dance and poetry presentations by the children.

Artsakh Human Rights Ombudsman Gegham Stepanyan discussed the effects of Azerbaijan’s ongoing attacks on border villages and the water and gas challenges facing the Artsakh population.  During the March 2022, Azerbaijani disruption of the gas pipeline, Stepanyan brought international attention to the crisis through daily reports, which the ANCA shared with elected officials.  He continues to monitor and investigate the latest incidents and offered detailed reports on Azerbaijan’s targeting of civilian populations. Stepanyan continues to work closely with families whose relatives remain prisoners of war in Azerbaijan and advocates for their immediate release.  The ANCA team spoke with several former prisoners who had returned from Azerbaijani captivity and heard their harrowing stories of survival.

“Meeting with returned refugees from the 2020 Artsakh war and speaking with families who lived through the Azerbaijani bombing of Stepanakert was a powerful reminder of the incredible resilience of Artsakh Armenians and the very real impact of worldwide ANC – Hai Tahd – advocacy in support of Artsakh self-determination and freedom,” said Nerses Semerjian.  “We look forward to sharing Artsakh’s story of survival with elected officials and community members alike – as we work to expand the ANCA’s network of chapters and advocates across the U.S.”

During meetings with Vardan Tadevosyan, the founder and director of the Lady Cox Rehabilitation Center, the ANCA team learned more about the life-changing assistance the center provides for soldiers and civilians injured during the 2020 Artsakh war, while working with children and adults with physical and mental disabilities.  The Center, first established in 1998 through a partnership of local health officials and then-Speaker of the United Kingdom’s House of Lords, Baroness Caroline Cox (a trained nurse), is respected internationally for its leadership in rehabilitation. Following the 2020 Artsakh war, the Center has assisted 1800 patients per year at their facility and served another 300 homebound patients in surrounding regions.  The ANCA has long called for U.S. humanitarian assistance for the Center to increase outpatient services and expand its reach into isolated, rural, and impoverished areas.

The ANCA team also met with representatives of The HALO Trust, whose demining efforts have saved countless lives in Artsakh for over two decades, in part through ANCA-supported U.S. assistance. The HALO Trust hit a demining milestone last week, announcing that they had just finished clearing the Artsakh capital, Stepanakert, of all known unexploded ordnance – a major feat since over 20% of Stepanakert had been contaminated during the 2020 Artsakh war.  The ANCA continues to support U.S. demining assistance to the HALO Trust to clear Martuni and Martakert, the second and third-most densely populated cities in Artsakh, particularly given the increasing flow of returning civilians to the area.

During the ANCA working visit, the team also explored ways to encourage broader Artsakh youth civic participation, offering best practices developed through the ANCA’s broad range of student empowerment and career services programs.  ANCA Programs Director Alex Manoukian is working closely with the ANC of Artsakh to explore remote and in-person intern exchanges between Artsakh and the U.S., with a focus on university students interested in policy, politics, and media.  Manoukian, who also serves on the Armenian Youth Federation Eastern Region (AYF-ER) Central Executive, teamed up with AYF-ER Central Junior Council member Shirag Ohannesian in visiting with AYF chapters throughout Artsakh to expand cooperation through the AYF “Together for Artsakh” program.

“This is my second visit to Artsakh in the past six months, and each time our ANCA Board members and staff visit, we return with new ideas to strengthen the bond with the people – and particularly our youth,” said Alex Manoukian.  “Working with the ANC of Artsakh and the AYF, we look forward to building on existing programs and establishing new ones to help Artsakh students and recent graduates build a brighter future in their ancestral homeland.”

Prior to the ANCA working visit to Artsakh, Yerimyan submitted testimony to the House Appropriations Subcommittee on Foreign Operations, outlining Armenian American pro-Artsakh priorities, with a sharp focus on ending all U.S. military aid to Azerbaijan and delivering an urgently needed $50 million aid package to Artsakh.

In her testimony, Yerimyan made the case that, in the wake of Azerbaijan’s ethnic cleansing of Artsakh and amid Baku’s ongoing occupation of sovereign Armenian territory, the U.S. Congress should hold the Aliyev regime accountable by cutting off all U.S. military aid to its armed forces. She also pressed for a long-term developmental investment in Artsakh to help its families “rebuild their lives and resettle in safety upon their indigenous Armenian homeland.”