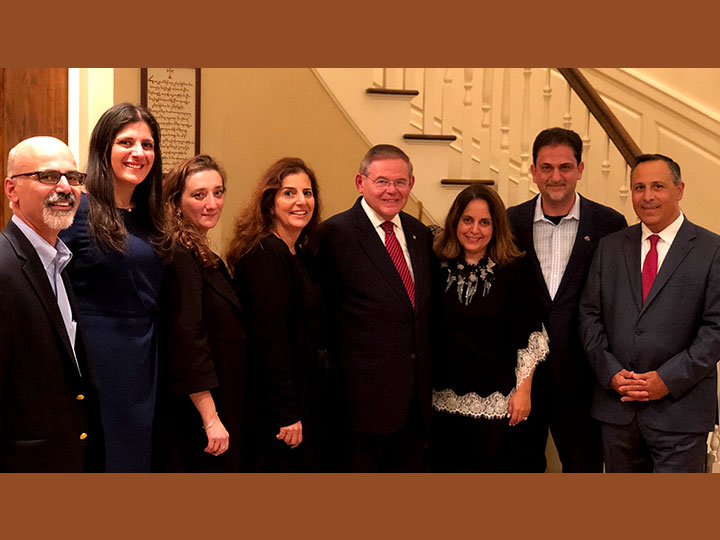 WASHINGTON, DC – The rise of Senator Robert Menendez to the chairmanship of the powerful Senate Foreign Relations Committee was welcomed today by the Armenian National Committee of America (ANCA), which has worked closely with him, locally and nationally, since he was first elected to the U.S. Congress nearly thirty years ago.

“The ANCA is proud of our strong, enduring, and principled working relationship with Senator Menendez,” remarked ANCA Chairman Raffi Hamparian. “We are confident that as Chairman of the U.S. Senate Foreign Relations Committee he will be a strong supporter for both Armenia and Artsakh.”

“As a resident of New Jersey, I am so proud that Senator Menendez has risen to become the leader of the U.S. Senate Foreign Relations Committee,” shared ANCA Board member Ani Tchaghlasian. “For decades, the ANCA of New Jersey could count on Congressman and later Senator Menendez to go to bat for our cause. I am confident that the same will be true as he chairs this powerful committee,” added Tchaghlasian.

Senator Menendez – who spearheaded unanimous passage of the Armenian Genocide Resolution, S.Res.150, in the U.S. Senate in December of 2019 – has a decades-long legislative track record of leading pro-Armenian initiatives. He is respected across Capitol Hill for relentlessly and effectively championing policy priorities of concern to the ANCA of New Jersey and the Garden State’s vibrant Armenian American community. His Genocide resolution locked in permanent U.S. Senate recognition and remembrance of this crime against humanity, which he then leveraged to ensure that the Library of Congress properly cataloged relevant books in its collection under an Armenian Genocide subject heading.

A strong supporter of Artsakh – known for his vigorous defense of Section 907 of the FREEDOM Support Act – Senator Menendez secured a General Accounting Office assessment of the Trump Administration’s dramatic $120,000,000 increase in U.S. military aid to Azerbaijan, and – in the wake of Azerbaijan’s September 27, 2020 attack on Artsakh, introduced two measures, S.Res.754 and S.Res.755, scrutinizing U.S. security assistance to Turkey and Azerbaijan in light of their domestic abuses and acts of regional aggression. He has led bipartisan Senate campaigns to support U.S. aid to Artsakh and ensure continued USAID funding for the HALO Trust’s life-saving de-mining operations.

The ANCA strongly supported the bold leadership of Senator Menendez in his landmark campaigns to block two deeply flawed U.S. ambassadorial nominations – Matt Bryza to serve as U.S. Ambassador in Azerbaijan and Dick Hoagland to act as U.S. Ambassador to Armenia. Based on Bryza’s demonstrated anti-Armenian bias and Hoagland’s on-the-record denial of the Armenian Genocide, Senator Menendez led successful Senate opposition to their respective confirmations. He faced relentless attacks for these principled stands – including hostile policy editorials from the Wall Street Journal and the Washington Post.

The ANCA was joined in welcoming Senator Menendez’s chairmanship by partner organizations, In Defense of Christians (IDC) and the Hellenic American Leadership Council (HALC).

IDC’s Toufic Baaklini noted that: “Senator Menendez is a strong advocate for ancient Christian communities who are at threat of extinction in the land where Christianity began. We are incredibly grateful for his advocacy for U.S. assistance to the Lebanese people, as well as his calls for accountability against Iran, Saudi Arabia, and Turkey for state-sponsored Christian persecution. We are thrilled he will serve as Chair of the Senate Foreign Relations Committee and extend our warmest congratulations to him.”

Endy Zemenides of HALC commented that: “Senator Menendez’s chairmanship of the Senate Foreign Relations Committee will greatly advance efforts to restore American leadership in this chaotic world. Bob Menendez is as principled, creative, and effective as any figure in American foreign policy. We very much look forward to working with the new chairman.”

Senator Menendez has consistently received A+ grades from the ANCA. His outstanding track record of support on key Armenian American community concerns began with his election as mayor of Union City in 1986, continued through his time in the New Jersey state legislature from 1988 to 1992, and flourished on a national scale following his 1992 election to the U.S. House of Representatives. As a member of the House International Relations Committee, then-Congressman Menendez voted in favor of the Armenian Genocide Resolution in 2000 and 2005, setting the stage for future House consideration of the measure. During his years in the U.S. House, he is best remembered for his leadership in maintaining Section 907 restrictions on U.S. assistance to Azerbaijan in 1997.

He continued to elevate Armenian American priorities when he was elected to the U.S. Senate in 2006. Whether scrutinizing U.S. ambassadorial nominees to Turkey and Azerbaijan regarding their positions on the Armenian Genocide or mediating a lasting peace for the Republic of Artsakh, Senator Menendez has been a stalwart leader on Armenian American concerns.