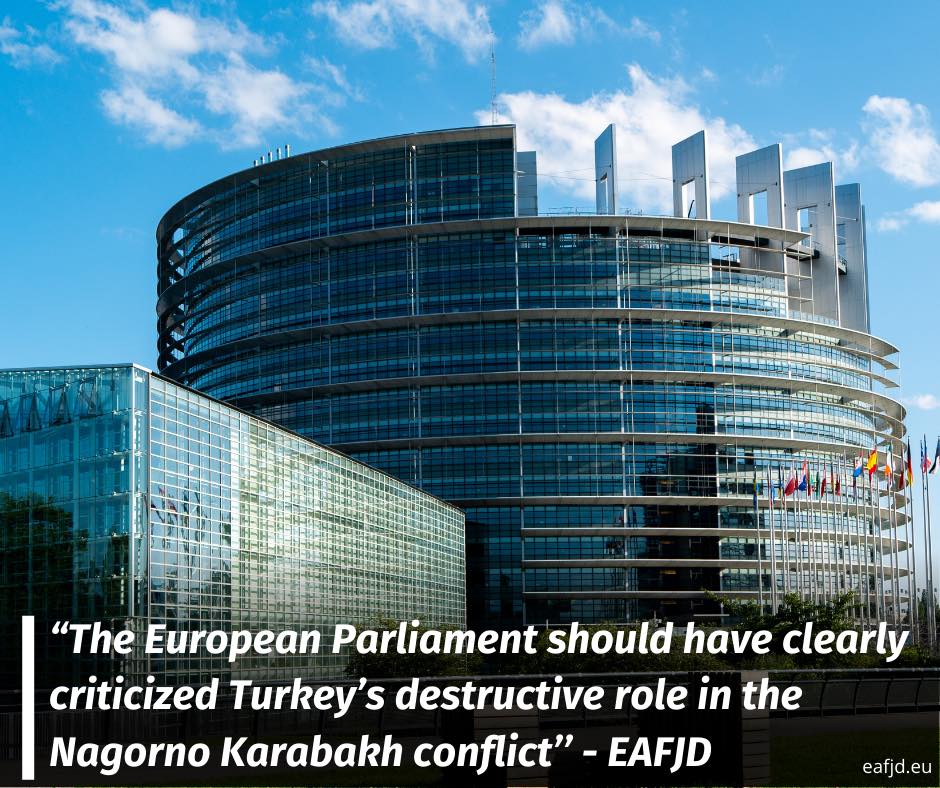 urges Turkey to commit to a genuine reconciliation between the Turkish and Armenian peoples, including settling the dispute about the Armenian Genocide and fully comply with its obligations to protect Armenian and other cultural heritage;

calls on the EU and its Member States to examine the possibility of banning the right-wing extremist movement “Grey Wolves” in EU countries;

urges Turkish authorities to increase their efforts to effectively address the dire situation of Armenians and other minorities in the country;

is concerned that Turkey’s foreign policy in recent years contradicts the common goals of the EU’s foreign and security policy, especially with regard to the Caucasus;

considers that Turkey is persistently further from EU values and standards.

The EAFJD welcomes the EP report, in particular, the aspect concerning the recognition of the Armenian Genocide.

Nevertheless, the EAFJD considers that the European Parliament should have clearly criticized Turkey’s destructive role in the Nagorno Karabakh conflict, as it did in its last year’s report.

While evaluating the process of the ongoing dialogue between Turkey and Armenia, the EP and the EU should urge Turkey to refrain from putting any preconditions, in particular, relating the process of the Turkish-Armenian reconciliation with the Nagorno Karabakh conflict and thus serving the interest of the third party , i.e. Azerbaijan. Unfortunately, until now the Turkish intentions during a dialogue have been either an imitation and or aimed at imposing its own will – a process which has little to do with genuinely coming to terms with its own past.

We will continue keeping these issues in the focus of our attention.