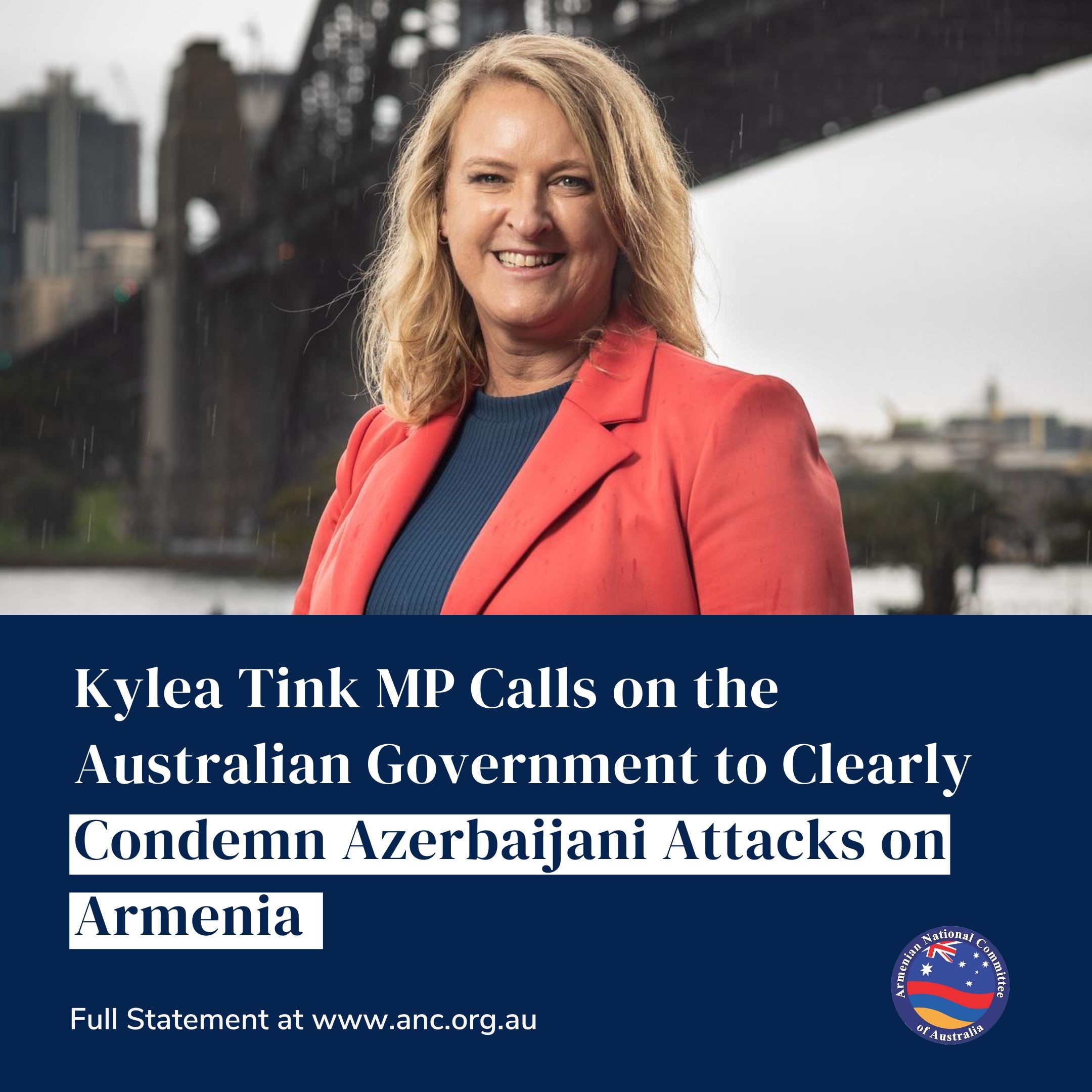 Newly-elected Member for North Sydney, Kylea Tink has risen in the House of Representatives and called on Australia’s Federal Government to clearly denounce Azerbaijan’s latest assault against the Republic of Armenia’s sovereign borders, reported the Armenian National Committee of Australia (ANC-AU).

Following briefings by Armenian-Australians regarding the attacks on Armenia’s territorial integrity and the human rights of the country’s citizens, Tink stood in the Australian Parliament and delivered a Private Members Statement, adding her voice to the chorus of international condemnation on Azerbaijan’s attacks against Armenia.

Tink detailed to the Chamber the wide-scale humanitarian crisis and infrastructure damage caused as a result of Azerbaijan’s aggression against Armenia.

She later went on to highlight the hypocrisy in Australia’s failure to condemn Azerbaijan’s aggression against Armenia.

“Ultimately the situation remains tense as evidence of human rights violations begins to emerge. As tensions between Russia and Ukraine escalated, we as a nation did not hesitate to condemn the Putin regime’s action, as we should, and in time, we’ve come to provide both financial and material resources. Yet in the case of the invasion of Armenia, we remain silent,” Tink said.

Tink added: “With the second largest Armenian Australian community living within the borders of my electorate it is difficult for me to account for what appears to be a clear inconsistency on our government’s behalf. In this context, I urge our government to emphasise Australia’s commitment to democracy and condemn the Azerbaijan attack on Armenia. To do anything less would be to fail to play our role as a good global citizen.

ANC-AU Executive Director, Michael Kolokossian thanked Tink for her support of the Armenian-Australian community during this extremely difficult time.

“For 14 days, our community’s calls for action have been met with silence from the Australian Government, which is bordering on complicity in Azerbaijan’s assault on and occupation of Armenia’s sovereign borders,” Kolokossian said.

“Armenia is under attack, and we thank Ms Kylie Tink for recognising this and joining our calls for the Australian Government to stop tip-toeing around this issue and publicly condemn the Azerbaijani regime for their gross violations of Armenia’s territorial integrity and human rights,” Kolokossian added.

Kylea Tink was elected to the seat of North Sydney following the 2022 Australian Federal Elections.