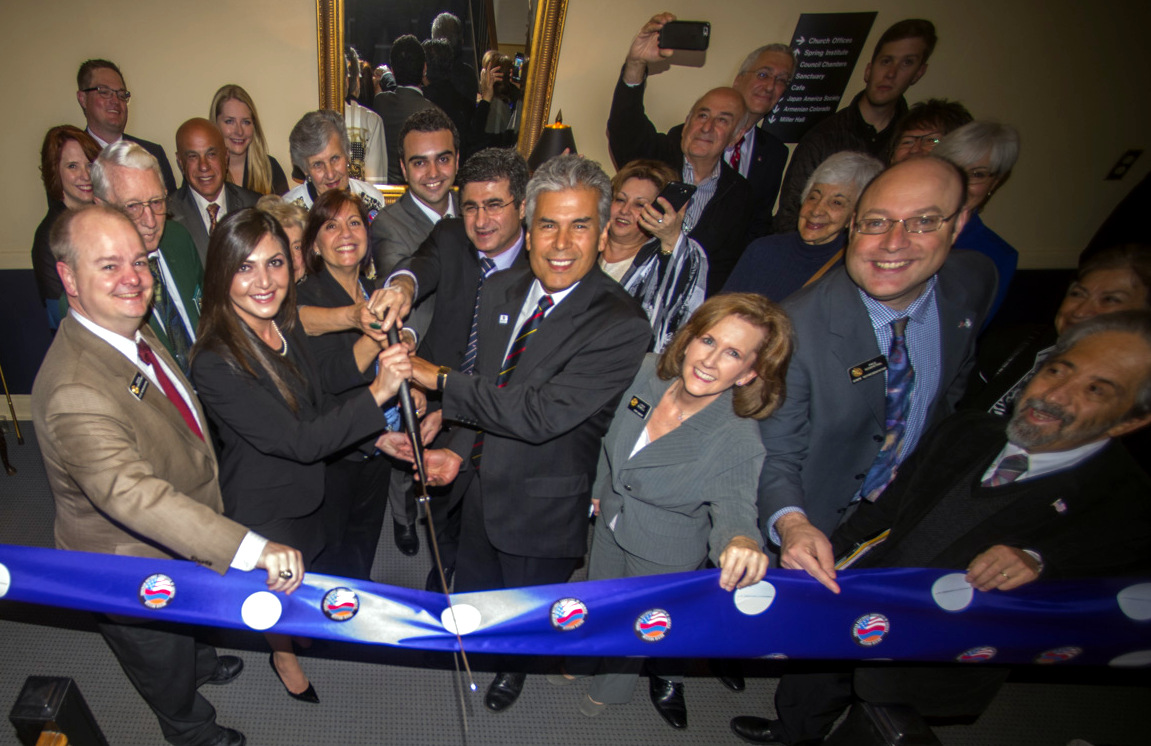 Denver, CO- Spirits were high early Monday as the snow from days’ prior melted away and the warm morning sun beamed down in the Centennial State for the official opening of the Armenian National Committee of America – Western Region (ANCA-WR) and Armenians of Colorado (AOC) shared offices across the street from the Capitol – giving Colorado’s vibrant Armenian community a home to call their own in the heart of Denver.

“The opening of our first regional office outside California is a testament to our unwavering commitment to our grassroots and our expansion efforts in the region,” remarked Elen Asatryan, Executive Director of the Los Angeles-headquartered ANCA-WR. “Our regional office in Denver staffed by our community development coordinator will not only allow for us to take activism to the next level in Colorado especially as we near elections, but also educate, motivate, and activate communities in 17 other states in the American West. In light of continued attacks In Artsakh, we must unite to fight for the survival and strengthening of our homeland and communities on all levels. We look forward to building on our strong foundation and partnership with AOC, our grassroots, and Colorado based organizations to advance our collective cause for years to come,” she added.

The ceremony started with opening remarks by Hedeshian and Asatryan, who welcomed guests and noted the historic symbolism of establishing an office in the very same church that was a statewide leader in the 1915-1930 Near East Relief effort that helped save the Armenian nation during the Armenian Genocide and their excitement in working hand-in-hand to further develop grassroots activities and partnerships with other non profit and groups in Colorado.

“We are more than ever dedicated to serving the growing Armenian community in Colorado by offering new programs and cultural activities in our new space,” remarked Hadeshian. “We are thrilled that this community center happens to be across the street from the Armenian Genocide Memorial Garden on State Capitol grounds, established by AOC in 1982. We proudly welcome ANCA-WR to Colorado and look forward to partnering toward a common goal of promoting and empowering our community and heritage.”

In his congratulatory remarks, Denver Deputy Mayor Don Mares noted that “I am thrilled to be here. The one thing that is amazing to me that I have learned as Deputy Mayor is that the work of our government these days doesn’t happen without strong partnerships and this is a very special relationship here with the Armenian community. Let’s continue to work together because we really can’t do anything alone. Anything the city can do, we are here”.

Senator Linda Newell, a longtime supporter of the Armenian community welcomed the group to capitol hill and went on to thank both organizations for all their efforts and in welcoming her into the Armenian family with open arms. Sen. John Kefalas, who made some of his remarks in his native Greek language, commended the success of the brotherly Armenian community.

Two elected officials spoke of Armenian American issues, including securing peace for Artsakh. Rep. Gordon Klingenschmitt reiterated his support for Artsakh’s self-determination, peace, and diplomacy despite apparent protest from the Government of Azerbaijan to his earlier condemnation of the latter’s aggression and war crimes in April 2016. Rep. Paul Rosenthal spoke of the friendships he has developed with Armenian Americans, as well as about the great time he had visiting Armenia and Artsakh last year.

Sen. Beth Martinez Humenik, who joined the ceremony toward the end, was the first to sign the office guestbook following the ceremony. Guests were acquainted with the shared office, which consists of working and meeting areas and is adorned by the flags of the USA, Colorado, Armenia, and Artsakh, as well as beautiful wall photographs and a map of modern Armenia, donated by Mike’s Camera. During the breakfast reception, Asatryan and Hedeshian publicly thanked all supporters, and especially recipient of September’s “Colorado We Thank You” gala Lifetime Achievement recipient LaRae Orullian for her generous donation toward paying the rents of both organizations for the first six months.The reception gave an opportunity to Armenian American community members to interact with elected officials, as well as learn more about national and regional updates from the ANCA-WR delegation visiting from Los Angeles. Notable community members who attended the ribbon cutting and reception but were unable to visit the House of Representatives afterwards included ANCA-Colorado Advisory Board member Dr. Garo Chalian, founder of Endodontics of Colorado and Quinn and Chalian Law; Vic’s Jewelry and Watch founder Vahe Berejiklian, Sarkisian’s Oriental Rugs and Fine Arts co-owner Tor Sarkisian, Morgan Stanley vice president Roger Papazian, Denver businessman and philanthropist George Cole, and independent watchmaker Sako Maghakyan.

Following the ribbon cutting and breakfast reception, ANCA-WR and AOC leaders, joined by community members, were welcomed on the floor of the Colorado House of Representatives. Rep. Alec Garnett, whose Capitol Hill district includes the new offices, presented tributes signed by House Speaker Dickey Lee Hullinghorst to Asatryan and Hedeshian, stating that “The members of the Colorado House of Representatives are proud to recognize and celebrate the opening of the Denver office,” which “signifies the strides of this community against all odds.” . Full text of the tribute is available here.

Rep. Kathleen Conti presented a tribute signed by Speaker Hullinghorst to three-time Emmy-winner Denise Gentilini, whose accomplishments include the musical I AM ALIVE about her grandparents’ survival of the Armenian Genocide. Gentilini was joined in the House of Representatives by her wife Lynnette Prisner, as well as her mother Marie Gentilini. I AM ALIVE premiered last year and was performed again with new songs at Denver’s Mile Hi Church on April 29. Leading up to the musical, Mile Hi Church hosted ANCA-WR’s America We Thank You exhibit, detailing the saving of Armenian orphans by the Near East Relief. Incidentally, Gentilini’s grandparents Kourken and Malvine met at a Near East Relief refugee camp in Greece after surviving the Armenian Genocide.

The opening of the shared ANCA-WR and AOC office generated a lot of buzz on Capitol Hill. Pulitzer Prize winning journalist Joey Bunch reported in detail the office opening on The Denver Post. “An emerging political presence stepped farther out into the Colorado spotlight Monday, as Armenians of Colorado and Armenian National Committee of America opened a shared office in the basement of the First Baptist Church, across 14th Street from the Capitol,” wrote Bunch. Quoting Asatryan, Yenokian, and elected officials, Bunch also noted the successful 2015 Colorado commemoration of the Armenian Genocide Centennial: “Last year, Democratic Gov. John Hickenlooper unveiled the State Capitol Khachkar Memorial dedicated to all victims of crimes against humanity.” As of 8PM on May 3, Bunch’s “Armenian National Committee sets shop in Colorado” was the second most-viewed report on the Denver Post’s political blog.

The shared ANCA-WR and AOC offices are located at 1373 Grant Street, Suite 101A, Denver, Colorado 80203 – a few minute walk from the Armenian Genocide Memorial Garden on Colorado State Capitol Grounds.

The opening of the office comes a week after the 100+1 Commemoration of the Armenian Genocide organized by the AOC at the memorial on April 24 and the legislature commemoration, when on Friday, April 22, the Colorado community took to the capitol to join the CO Senate and House, and the AOC in commemorating the Armenian Genocide on the house and senate floors and spent the day meeting with over 50 officials to educate them about the current realities on the front-lines in Artsakh, the Armenian Genocide and our priorities and initiatives for the year during our CO Advocacy Day. Details on the ANCA WR Colorado Advocacy Day can be found at ancawr.rg/coadpost.

While the missions of the ANCA-WR and AOC vary in scope, both organizations strive to empower and give voice to Armenian-Americans, build bridges within communities, and establish meaningful and effective partnerships with a multitude of cultural, community based and civically-engaged organizations.

Since its founding in 1979, AOC has furthered the understanding of Armenian history and heritage through educational and cultural programs in Colorado and has led the charge in the Centennial state.

Though recognition, resolution and education of the Armenian Genocide, the right to self-determination of Artsakh, and defending the political, social, economical rights of the Armenian-American community is at the forefront of its priorities, ANCA-WR through its local chapters caters to the needs of each of its communities differently. Programs range from initiatives such as Hye Votes, which concentrates on making the community’s voice heard through the ballot box through voter registration and get out the vote efforts, Path to College which help parents and students through graduation requirements and the college admissions process, and free legal clinics to educational town halls on local, state and federal issues, internship and policy fellowship opportunities for students and young professionals, and coalition building with organizations that take on causes that affect the livelihood and seek measures for the overall betterment of the community and the residents they serve.

The Armenian National Committee of America – Western Region is the largest and most influential Armenian-American grassroots advocacy organization in the Western United States. Working in coordination with a network of offices and supporters around the country, the ANCA-WR advances the concerns of the Armenian American community on a broad range of issues.

(THE DENVER POST, May 2) An emerging political presence stepped farther out into the Colorado spotlight Monday, as Armenians of Colorado and Armenian National Committee of America opened a shared office in the basement of the First Baptist Church, across 14th Street from the Capitol.

The office will be a hub for the state’s nearly 5,000 Armenian-Americans as well as the Western regional office for ANCA, which will serve Colorado and all the Western states outside of California.

The office will help raise the profile of Armenian immigrants and the unrest in the homeland, as well as assisting Coloradans of Armenian descent with voter registration, political involvement and educational opportunities, said Elen Asatryan, executive director for ANCA, headquartered in Los Angeles.

“The opening of our joint offices in the year following the Armenian Genocide centennial warrants nationwide celebration, as it signifies the strides of our community against all odds,” Asatryan said. “A people on the verge of annihilation, Armenians have in fact risen like a phoenix from the ashes, and have mobilized into an active citizenry and grassroots force with unparalleled vigor and resolve.”

ANCA board member Pierre Yenokian noted that the Denver First Baptist Church has deep significance for Armenians. Relief efforts were coordinated there after the 1915 Armenian Genocide, he said.

Asatryan added, “One hundred years later, the grandchildren and great-grandchildren of those whose lives were saved will be using for their headquarters from where they will tirelessly work on the grassroots level to preserve the Armenian cultural heritage and impact change both locally and statewide.”

Rep. Gordon Klingenschmitt, a Republican from Colorado Springs, attended the grand opening. He caused an uproar after he took to the House floor to condemn Azerbaijan’s invasion of Armenia last month in violation of terms of a 1994 ceasefire. He said he received push-back from Azerbaijani American consulate, which told him he didn’t understand the complexities of the conflict.

Klingenschmitt said hostilities continue to endanger the region’s Christian minority and he stands firm with Armenia.

“I believe in religious liberty for all people,” Klingenschmitt, a Christian minister, said on the doorstep of the First Baptist Church. “Violence leads to violence. I urge peace from all sides.”

Later in the morning Monday, the Colorado House welcomed a delegation of Armenian business people and visiting dignitaries.

Rep. Alec Garnett, a Democrat from Denver, introduced a tribute in the House to recognize “the work both Armenian organizations have done to advance the interests of the Armenian-American community and further the understanding of the Armenian history and culture.”