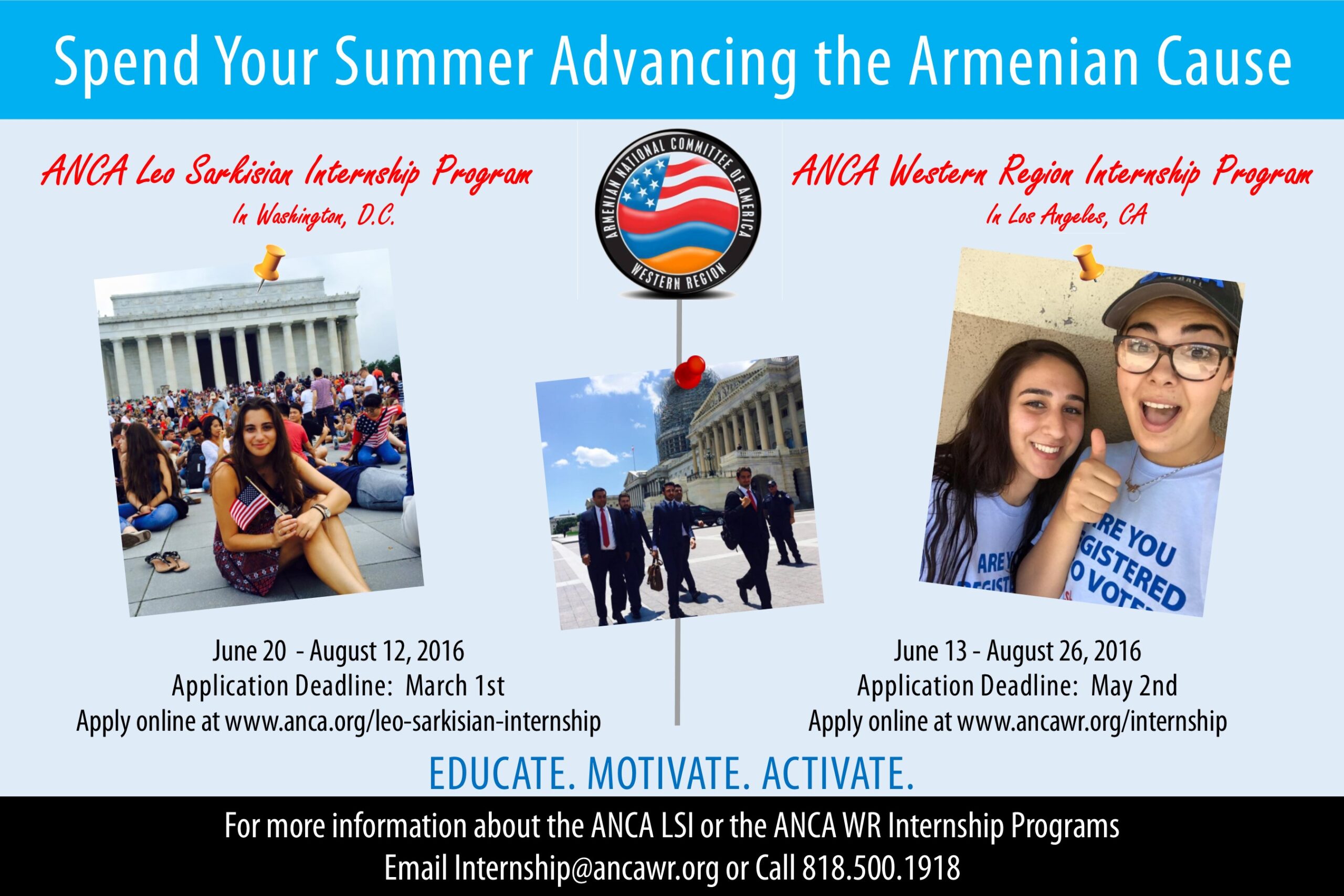 GLENDALE, CA.—The Armenian National Committee of America Western Region (ANCA-WR) announced that it is now accepting applications for the ANCA Leo Sarkisian (LSI) Internship and the summer session of the ANCA-WR and programs hosted in Washington, D.C. and Glendale, CA, respectively.

“The decision to apply for the Leo Sarkisian program has changed my life in more way than I ever expected. For 8 weeks I had the privilege of working in Washington, where I was immersed in politics at the federal level, while continuing to serve the Armenian cause. Every week brought a new experiences and I was lucky to share them with my fellow interns, who have become some of my closest friends. As a result of this program, I made the choice to stay in Washington to complete an internship in congress, which has now led to my first job. I owe everything to the ANCA and Leo Sarkisian program,’ stated former ANCA-WR and ANCA LSI intern Denise Altounian.

Throughout their internship, participants work on a wide variety of projects based on their individual interests, while gaining hands-on experience within the American political system. In addition to individual and joint projects, interns participate in workshops featuring a variety of guest speakers including public officials, ANCA leadership, and specialists from the community. In successfully completing all internship program requirements, participants in the ANCA-WR internship program may receive school credit.

“I had long heard that the ANCA-WR’s internship stands out the most because it is a very hands-on experience. This was definitely true. Instead of coffee runs, there was research to be done on foreign policy and proposals to be written. Each and every single assignment: easy and difficult, was part of a bigger picture, which is to uplift the Armenian Community’s standing in different socio-political aspects,” reflected 2015 ANCA-WR Summer Intern Ani Hakobyan.

“It has been profoundly rewarding to work with a group of driven individuals who were focused on the much larger objective of progressing the issues of the Armenian community in the United States and around the world. Whether it was voter registration drives, workshops, or advocacy trips, the grueling but rewarding work allowed me to reflect on my experiences and my identity as an Armenian living in the United States. This internships was far more than menial tasks, it developed me as an Armenian, a professional, a grassroots organizer, and a human being” stated 2015 ANCA-WR Summer Intern Morris Sarafian.

Established in 1985, the ANCA Leo Sarkisian Summer Internship (ANCA-LSI) program, provides student leaders and activists an opportunity to participate in an eight week intensive program designed to give them the tools necessary to effectively advance issues of concern to the Armenian American community on the federal, state and local level. Named in memory of the late ANCA Eastern U.S. community leader who spearheaded grassroots activism to advance the Armenian Cause for more than four decades, the Leo Sarkisian program now has hundreds of alumni across the world, spreading the message of truth and justice for the Armenian Genocide, freedom for Artsakh, and a secure, prosperous, and democratic Armenian homeland.

Established in Summer 2006, the ANCA Western Region Internship Program is a selective part-time leadership program, which introduces high school seniors, college students, and recent college graduates to all aspects of the public affairs arena. The program provides an opportunity for student leaders and activists to gain an in-depth understanding of the American political system, Armenian-American issues and advocacy efforts on the local, state and federal levels.