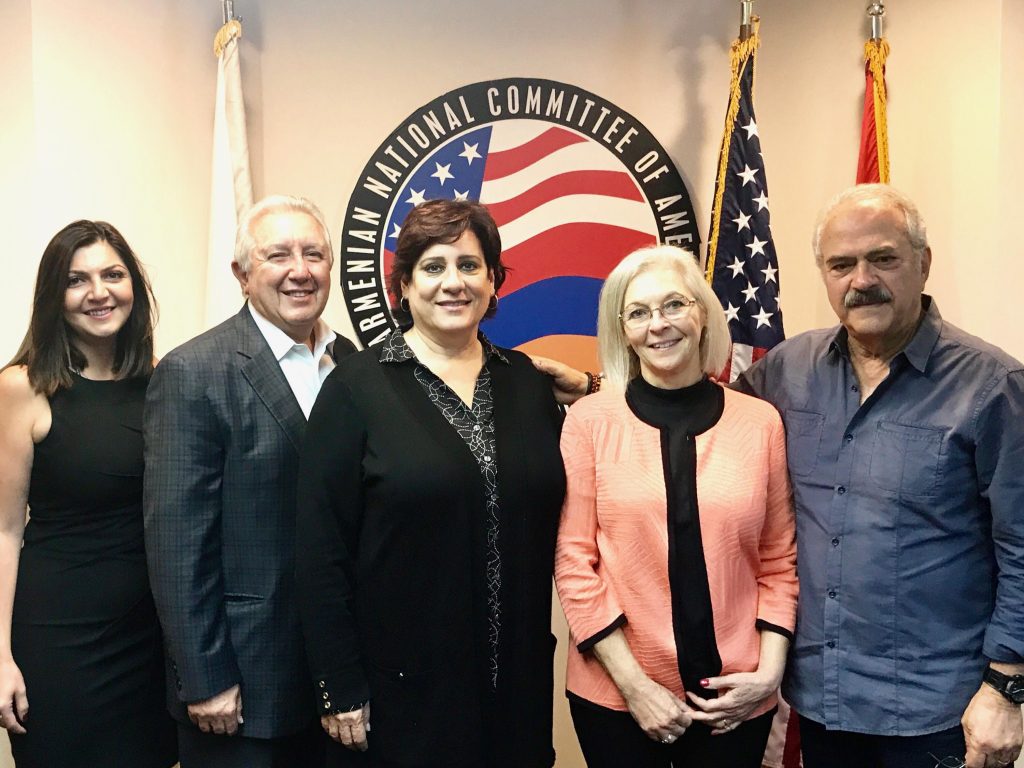 Salt Lake City, Utah – Earlier today, the Armenian National Committee of America – Western Region (ANCA-WR) announced its endorsement of Dr. Kathie Allen for United States Congress. The endorsement comes in the course of Utah’s 3rd district’s special election to replace Rep. Jason Chaffetz who officially resigned from his seat in May. Dr. Allen will face Republican John Curtis and a collection of third-party candidates in the general election on November 7, 2017.

“The ANCA-Western Region is proud to endorse the candidacy of Dr. Kathie Allen for US Congress. As a dedicated Armenian-American and granddaughter of Genocide survivors who cares deeply about issues important to all of us, we are confident that Dr. Kathie will continue to serve as a strong advocate for our Cause in the halls of government,” stated ANCA-WR Chair Nora Hovsepian.

“I am grateful and honored to receive ANCA’s endorsement and look forward to working with them during my campaign and when in Congress on issues of importance to the Armenian-American community,” stated Allen. “It is crucial that Turkey and the US formally recognize the Armenian genocide, and I will push for that in Congress along with improving bilateral relations between Armenia and the US. I also believe that Artsakh is entitled to self-determination and that de-mining efforts must continue to make this region safe. My grandparents fled Turkey in 1905 to begin a new life in the United States, and these are all important and personal foreign policy issues for me,” she added.

The organization’s decision came after a thorough endorsement process and meeting this past Saturday when Dr. Allen was visiting Los Angeles, and is based on her deep roots and understanding of issues important to the Armenian-American community. In addition to the proper recognition and resolution of the Armenian Genocide and Artsakh’s right for self-determination and independence, discussion topics during the meeting included health care, President Trump’s immigration ban, and education, among others.

Several Armenian-Americans have also already agreed to support Dr. Kathie Allen by hosting meet-and-greet fundraisers. The first is planned for October 12, 2017, at Cedars of Lebanon Restaurant in Salt Lake City, Utah, hosted by Mr. and Mrs. Raffi and Marlene Daghlian, while the second is planned for October 15 in Glendale, CA by Mr. Mike Sarian. Individuals interested in attending these events or donating to Dr. Allen’s campaign may contact Elen Asatryan of The Stark Group at 818.672.6260 or email elen@thestarkgroup.net.

As a family doctor, Dr. Kathie Allen spent thirty years caring for her patients—analyzing their symptoms, diagnosing their problems, and helping them get well. With health care as her top campaign priority, she wants to do the same thing for Utah’s 3rd Congressional District.

Just two days ago, her opponent was caught sponsoring inflammatory, anti-immigrant ads on facebook, which encouraged his supporters to sign petitions to “build the wall” and end sanctuary cities. His subsequent “explanation” made it clear that he will be another rubber stamp in Congress for the Trump agenda. Dr. Allen, in contrast, supports compassionate immigration policy that allows families to stay together. She is a passionate supporter of DACA and the Dreamers. She has said previously, “Immigrants are the bedrock of our nation. Dreamers are the topsoil.”

Dr. Allen won the Democratic Party’s nomination with 77 percent of the convention vote. Unlike her opponent, she did not face primary challengers. Additionally, she has raised more money for than any Democratic candidate in the history of this Congressional seat. She has currently secured the endorsement of 314 Action, a group dedicated to supporting candidates with scientific backgrounds, as well as numerous individuals both within her district and across the country, with more expected to come soon.

Born and raised in California, Dr. Allen finished college while writing radio ads for Shirley N. Pettis’s congressional campaign. After Mrs. Pettis’s victory, Kathie stayed on as a congressional aide for three years. She then worked for a community housing program in San Bernardino, where she saw firsthand how impoverished Americans have to live.

After graduating from Loma Linda University’s medical school in 1984 in the top third of her class, Dr. Allen moved to Salt Lake City to complete her residency. She has lived in Utah ever since. She practiced family medicine in Kearns and West Valley City, and operated a self-owned clinic for 23 years—while earning a new credential for sports medicine. Unlike many other doctors, Dr. Allen has continuously maintained her certification since 1987.

Dr. Allen has been very active in the Utah Medical Association, holding the offices of Secretary, Treasurer, and Vice-Speaker of the House of Delegates. She not only learned parliamentary procedure during this time but also worked with the Utah State Legislature to pass insurance reform. She currently practices medicine at the Utah Transit Authority’s clinic in Salt Lake City.

In early 2017, she founded the Fair Redistricting Caucus of Utah as a Facebook Group. It now has over 1400 members and a Steering Committee addressing ways to combat gerrymandering in Utah. Dr. Allen represents the FRCU on the Utah Redistricting Coalition and participates in a legal advisory group as well.

Her original family name was Poladian. This Armenian family lived in Istanbul in the 1800s, then migrated to Harput, Turkey, and changed their name to Ghourighian. Her Poladian grandparents came to America to escape the Armenian genocide. They arrived in New York City on January 8, 1905, with only $20. They settled in Brookshire, Texas, and started a grocery store business. Her grandfather’s cousin was the scion of a large family of Armenians who had success in Texas oil fields and politics. Dr. Allen’s maternal grandmother died when her mother was only three years old, and her grandfather sent to Turkey for a new bride. Neither he nor his bride disclosed that they each already had a child, which made for interesting family dynamics when she arrived in Texas! After learning this family history, her lifelong love of Balkan folk music began to make sense.

Dr. Allen has been married for 27 years to Craig Fineshriber, retired Principal Percussionist of the Utah Symphony Orchestra. She has three stepchildren and two grandchildren. In her spare time, she directs the Darena Balkan Womens’ Choir, which performed during the 2002 Salt Lake Olympic Winter Games.

The winner of the general election on November 7, 2017, will complete Chaffetz’s term and be up for reelection in 2018. In order to vote, you must be registered. To register to vote online, visit https://secure.utah.gov/voterreg/index.html. If you have moved since you last registered to vote, you must re-register, and may do so at the above link. Voters have an option to vote from home by mail or on Election Day, November 7, between 7 am and 8 pm. Community members who have already registered to vote should expect to receive their ballots in the mail week of October 16. To learn more about the election, visit vote.utah.gov.

To learn more about Dr. Allen or to volunteer, please visit www.drkathieallenforcongress.com.

The Armenian National Committee of America-Western Region is the largest and most influential Armenian-American grassroots advocacy organization in the Western United States. Working in coordination with a network of offices, chapters, and supporters throughout the Western United States and affiliated organizations around the country, the ANCA-WR advances the concerns of the Armenian American community on a broad range of issues.