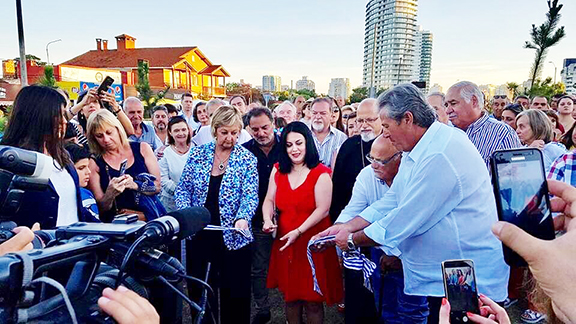 MONTEVIDEO, Uruguay (Agencia Prensa Armenia)—A square dedicated to the Republic of Armenia Square was inaugurated on January 7 in Punta del Este, Uruguay, with a sculpture of an Armenian woman made by Gor Davtyan, an artist from Ijevan, who donated it as a token of appreciation for dedicating the public place in honor of Armenia.

The project was developed jointly between the Embassy of Armenia and the Municipality of Maldonado, following a resolution passed in December 2015. The ceremony was attended by the Mayor of Maldonado Andres Antia Behrens, the Mayor of Punta del Este Andres Jafif, and the Minister of Tourism of Uruguay, Liliam Kechichian, along with the Ambassador of Armenia in Argentina, Uruguay, Chile and Peru, Esther Mkrtumyan, the Primate of the Armenian Apostolic Church in Uruguay, Archbishop Hagop Kelendjian, and representatives of the Armenian National Committee of Uruguay.

“The Armenian community has a lot of teamwork and a lot of people”, said Andres Jafif. “We have been working for many years for this place that I think our community deserves, in a beautiful place like Punta del Este. Our community has won the affection of all Uruguayans, a strong, hardworking community that continues to maintain its traditions,” added Liliam Kechichian.

The action is a sign of friendship that takes place within the framework of the 25th anniversary of the establishment of Diplomatic Relations between the Eastern Republic of Uruguay and the Republic of Armenia, and the centennial of the Armenian diaspora in Uruguay. In addition, during the event Punta del Este and Ijevan were declared sister cities.

Ambassador Esther Mkrtumyan recalled that “25 years ago with the establishment of diplomatic relations between Uruguay and Armenia, the traditional affection between our people turned into friendship and bilateral cooperation, in close cooperation for peace and harmony among nations.”