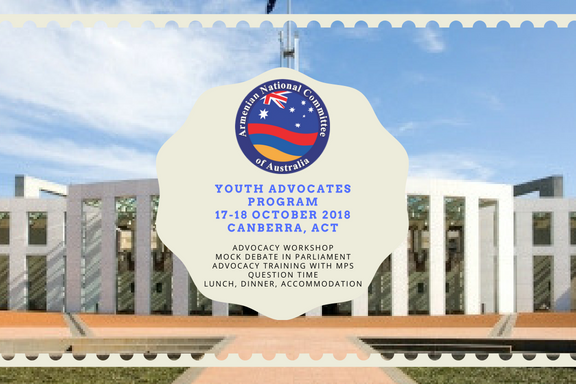 CANBERRA: A special youth-oriented program will see over a dozen young Armenian-Australians – from Sydney, Melbourne, Perth, Canberra and New Zealand – join the Armenian National Committee of Australia for the 2018 version of ANC-AU Advocacy Week in Canberra.

The peak Armenian-Australian public affairs body has invited the community’s youth and student organisations – including the Armenian Youth Federation of Australia, the Armenian Students Association of NSW (as well as student associations within USYD, UNSW, Macquarie), the Armenian Church Youth Association, the Armenian General Benevolent Union Youth Group, Homenetmen Scouts and Hamazkaine Dance Groups – to sign up for what has been labelled the “ANC-AU Youth Advocates Program”.

A dozen Young Advocates have signed up, with three places remaining to be filled between now and the end of this week (if interested, please contact admin@anc.org.au).

The ANC-AU Youth Advocates Program will feature:
A two day trip to the nation’s capital Canberra, with fellow Armenian-Australian youth, as well as members of the Armenian National Committee of Australia National Board, Office, and soon-to-be-announced guests;

An Advocacy Workshop, where professionals from the ANC-AU will pass on theoretical and practical advocacy tips;

A Mock Parliamentary Discussion at Parliament House, on a topic of national relevance, moderated by Trent Zimmerman MP and The Hon. Joel Fitzgibbon MP – Co-Chairs of the Australia-Armenia Inter-Parliamentary Union (Friendship Group);

Mock Advocacy sessions with actual Members of Parliament and Senators, who have kindly agreed to received our ANC-AU Young Advocates and grill them on their assigned topic;

Cocktail Reception at Parliament House, with MPs and Senators from the Australian Parliament.

Executive Director, Haig Kayserian said the ANC-AU Youth Advocates Program was a key component of the organisation’s #ANCAUoutreach initiatives, which are designed to attract more young Armenians into the world of politics and its associated disciplines.

“To achieve justice for the Armenian Genocide, peace in the Republic of Artsakh, and the continued sustainability of the Armenian Diaspora here in Australia, we need generations of Hai Tad advocates interested and trained in the work that we at the Armenian National Committee do,” Kayserian said.

“We at ANC-AU are convinced that the next Treasurer Hockey, the next Premier Berejiklian and the next news-breaking journalist is out there in our community. We are hoping to find them among our Youth Advocates and help them along their journey.”