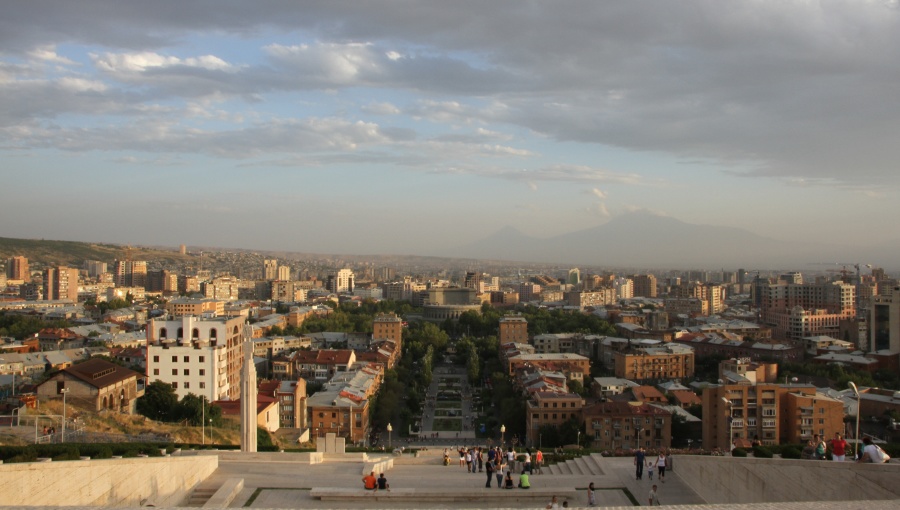 (bne IntelliNews) The Armenian diaspora is best known abroad for its efforts to have the Armenian genocide internationally recognised, but it is also a sizeable economic force. Its importance is not lost on the Armenian government, which has set up a designated Ministry for Diaspora Affairs to facilitate the links between the small Caucasus country of just 3mn people and its 7mn-strong diaspora.

Under the government of Karen Karapetyan, a former executive at Russian gas giant Gazprom who became premier in September, Yerevan’s calls for the diaspora to invest in and relocate to Armenia have multiplied in recent months. Case in point, in a multilingual Facebook post on February 28, Karapetyan called on the diaspora to help his government’s drive to transform the country into a business-friendly market economy, promising in exchange not to repeat “past mistakes”.

Since the beginning of the year, government representatives have held several rounds of talks with the Armenian diaspora in Russia, one of the largest such groups in the world. The result, according to Economic Development Minister Suren Karayan, is that Russia-based Armenian entrepreneurs have committed to investing some $300mn in Armenia in 2017.

Bedo Demirdjian, communications director at the European Armenian Federation for Justice and Democracy (EAFJD), perceives the government’s calls to the diaspora as being overall positive, although he notes that a better investment environment is necessary in order to attract more significant investment from abroad.

“I do not think that there are huge obstacles to the diaspora’s economic engagement with Armenia […] But if I were to single out a particularly important barrier, it would be the oligarchic control of certain sectors of the economy, which only benefits the ruling elites,” he wrote in an email to bne IntelliNews. Demirdjian echoes similar criticism from opposition parties and even international organisations, which have repeatedly called on Yerevan to fight corruption and reduce red tape.

Since Karapetyan took office, there have been some modest steps to address these issues, particularly since his mandate was to quell popular discontent that burst into anti-government protests last summer. But more time and effort will be needed to fight corruption in Armenia, a country where there is big contingent of MP – oligarchs and where tax evasion is rampant.

Karapetyan perhaps understands the diaspora better than his predecessors, having himself been temporarily a member of the diaspora, when he lived in Russia between 2011 and 2016. His brother, Russia-based real estate mogul Samvel Karapetyan, is the wealthiest ethnic Armenian at the moment, with a fortune that Bloomberg estimates at $4.36bn. Samvel Karapetyan is a well-known investor in real estate in Armenia, having more recently purchased electric utility ENA from another Russian company, Inter Rao, in 2015, a deal that ended a protracted political crisis over electricity prices and perceived corruption and mismanagement at Russian-owned companies in Armenia.

Minister Karayan’s promises regarding the $300mn to be invested by ethnic Armenians in Russia could refer solely to the prime minister’s brother, who has pledged to invest that precise sum of money on rehabilitating parts of the old capital city of Yerevan and turning them into a historical and cultural complex.

A few more wealthy investors such as Karapetyan have helped build some of the country’s most important infrastructure projects. One such person is Argentina-based Eduardo Eurnekian, who invested in the Zvartnots international airport in Yerevan, among other projects, and Swiss-Armenian banking investor Vartan Sermakesh.

However, the importance of the Armenian diaspora’s economic power comes from its numbers, Demirdjian believes. The numerous small and medium-sized investors in education, IT, jewellery, journalism, agriculture, tourism, hospitality, design and culture collectively help shape the economy of the country. “Every single organisation and investor, large or small, does its part, all that diversity in the Armenian diaspora plays a role in the Armenian economy,” he says.

Among the most important organisations, Demirdjian highlights the Artsakh Roots Investments (ARI), which has helped rebuild villages in the breakaway region of Nagorno-Karabakh that is contested by both Armenia and Azerbaijan and was the cause of a destructive war in the early 1990s; the Tufenkian Foundation; and the All Armenia Fund.

However, not all Armenians have the same level of engagement with their country of origin. For the survivors of the Armenian genocide who have now lived for four generations in North America, Western Europe and Russia, Armenia may merely be a distant place of origin.

The two powerful Armenian lobbying organisations in the US – the Armenian Assembly of America and the Armenian National Committee of America – are prime examples of institutions which gather 4th generation Armenian Americans, militate primarily for the recognition of the genocide, but call the US their home. The Portugal-based Calouste Gulbenkian Foundation, in the meantime, defines itself as a charitable organisation that promotes arts, culture and sciences, and that has an international scope.

Meanwhile, a more recent wave of migrants have left the country in recent years for Europe and Russia, seeking to escape poverty (almost a third of Armenians are said to live in poverty, according to the World Bank) and joblessness, and are an important source of remittances to their home country. This group has stronger connections to Armenia, and many would return if they could earn a living at home.

But there is another group of Armenians living in the diaspora, which Demirdjian calls the “hidden Armenians”, who are the descendants of those that survived the genocide by relocating to Eastern Turkey and converting to Islam. While the estimates of their number vary widely between two and five million, Demirdjian believed that they are becoming a political force that is ever more vocal and in touch with their Armenian roots.

Seeing how many in the diaspora are removed from the daily happenings in the country, the diaspora ministry is seeking to woo the younger among them with educational programmes. One such programme is “Ari Doun” (literally “Come Home”), which targets ethnic Armenian teenagers who have never visited the country.

At the same time, the government has imposed limitations on the ability of diaspora Armenians to engage in local politics – they need to have spent at least four consecutive years in the country before running for parliament or becoming a cabinet member, a requirement that the current prime minister himself does not meet.

But Demirdjian notes that “part of the diaspora ridicules the government” for its outreach initiatives, while others take its efforts more seriously, depending on their openness to the idea of returning to Armenia.

As for Karapetyan’s recent calls to the diaspora, Demirdjian believes that the government’s offer would be more enticing if it undertook structural reforms to increase transparency and equity. Either way, the upcoming parliamentary election in April “will be the most observed election in the history of the republic”, he writes. “There hasn’t been this much interest in an election in the diaspora in decades. On either side of the debate, everyone knows how important the switch from a presidential to a parliamentary system will be,” he says.

Photo: Yerevan and the rest of Armenia have a population of just 3mn people, while there are 7mn in the diaspora. (BNE Intellinews)