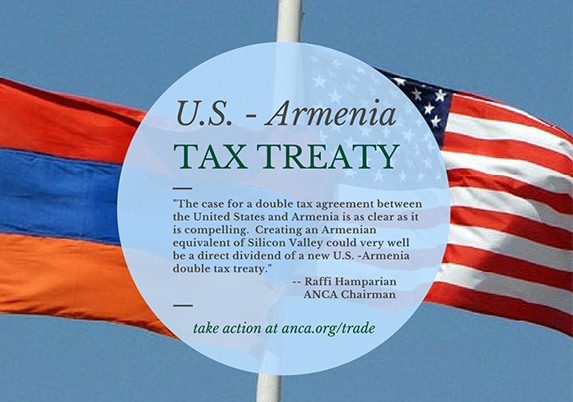 Why The ANCA Is Pushing For A U.S. – Armenia Double Tax Treaty

Remember in 1973 when the Soviets, under Leonid Brezhnev, and the Americans, during Richard Nixon’s presidency, signed a tax treaty?

That’s OK. Neither do I.

That was decades ago. A different time. A very different world.

The Union of Soviet Socialist Republics, our enemy back then, hasn’t existed for a quarter century.

And Armenia, now a free state, is a close friend of the United States.

This old accord – formally known as the Convention between the United States of America and the Union of Soviet Socialist Republics on Matters of Taxation – was outdated the day it was signed (June 20, 1973) by two antagonistic powers, and is clearly no basis for modern day U.S.-Armenia economic cooperation in 2016. In fact, as a matter of international law, Armenia does not even consider itself the legal heir to Moscow’s signature on this antiquated treaty.

And yet, the Obama Administration and its Treasury Department somehow think that this treaty is sufficient to prevent the double taxation of profits generated by the growing number of U.S. and Armenian firms operating in both of these jurisdictions.

It is a sad state of affairs to have the threat of double taxation hanging above each and every bilateral commercial transaction. Business leaders, instead of focusing on creating jobs in the United States and Armenia, are forced to spend time navigating an uncertain taxation environment, meaningfully limiting the scope and depth of their deals to avoid double taxation. Even worse, countless potential companies considering U.S.-Armenia business investments are deterred by the prospect of paying taxes twice on the same earnings. These are the investments that never get made, the trade deals never negotiated, the offices and factories never opened. This is the massive hidden cost of failing to eliminate – via a simple, straightforward treaty – a major barrier to the growth of bilateral commerce. This, very simply, is the price we all pay for indifference on this key economic front.

The case for a double tax agreement between the United States and Armenia is as clear as it is compelling. America has taxation treaties with dozens of countries for good reason, including those with a number of smaller economies. U.S. policymakers know that these treaties are, in a mutually beneficial way, good for both American businesses and workers. Armenia, for its part, has double tax treaties with many nations, including large economies such as the United Kingdom and India. In fact, in June of this year, Armenia signed its latest tax treaty with Germany.

The United Nations Department of Economic and Social Affairs spelled out the rationale for international double tax treaties in a 2011 document: “The growth of investment flows between countries depends to a large extent on the prevailing investment climate. The prevention or elimination of international double taxation in respect of the same income – the effects of which are harmful to the exchange of goods and services and to the movement of capital and persons, constitutes a significant component of such a climate.”

As the ANCA has shared directly with U.S. Secretary of the Treasury Jacob Lew and senior officials of the Republic of Armenia, we view a double tax treaty not as an amenity of U.S.-Armenia bilateral relations, but rather as a baseline treaty for trade and investment. Without such an agreement, investors are faced with uncertainty, and, as we all know, uncertainty is not a factor that enhances commercial ties.

With the Information Technology (IT) sector in Armenia growing and now reportedly employing well over 15,000 individuals, the time has never been better to incentivize U.S. investments in that sector by negotiating a double tax treaty. The fact that IT firms in Armenia, a sector seen as less susceptible to corruption and offering salaries far above the average in Armenia, would benefit from a double tax treaty provides just one more reason to boost this sector in this way. Creating an Armenian equivalent of Silicon Valley could very well be a direct dividend of a new U.S-Armenia double tax treaty.

PicsArt, the digital art application that has over 75 million active users and 300 million downloads is a classic example of the possibilities that exist for IT growth between the United States and Armenia. While Forbes Magazine named PicsArt among its top five “Hottest Startups” last year, the truth is that this hot startup and other firms have to deal with a dinosaur-era tax regime that dates back to 1973. That is not only wrong – but it also sends a negative message to potential U.S. investors in Armenia’s IT sector.

Thankfully, a growing number of U.S. legislators are working with the ANCA to bring attention to the need for a U.S.-Armenia double tax treaty. At a March hearing of the House Financial Services Committee, Congressman Brad Sherman (D-CA) made a special point of pressing Treasury Secretary Jacob Lew to enhance U.S. commercial ties with Armenia by negotiating a tax treaty. When Secretary Lew voiced reservations about the lack of sufficient business with Armenia, Congressman Sherman shot back, describing the situation as a “chicken and egg” scenario. The California Congressman stated: “You don’t get the business investment, because you don’t have the tax treaty. Then you don’t need the tax treaty because you don’t have the business investment. Given that this Congress has provided well over a billion dollars in aid to Armenia, it would seem that having one member of your staff to achieve the same objectives would be appropriate.” In addition to the vigorous support from Congressman Sherman, Congresswoman Judy Chu (D-CA) and Congressman Ted Lieu (D-CA) and others on Capitol Hill are are on record urging Secretary Lew to begin negotiating a double tax treaty with Armenia.

In addition to political support and backing from PicsArt and Triada Studio, global business leaders Microsoft, FedEx, NASDAQ, Marriott, Grant Thornton and firms like Ameria Banking Group and others are on record regarding the benefits of a tax treaty.

A new tax treaty would represent a great way to give substance to the rhetoric – from both Washington and Yerevan – about improving U.S.-Armenia bilateral relations. This accord would both reflect and reinforce the progress we saw last year with the signing of a U.S.-Armenia Trade and Investment Framework Agreement. It would, as well, create the conditions for the future growth of the U.S.-Armenia economic relationship, the continued development of bilateral government-to-government ties, and, of course, the strengthening of the enduring bonds of friendship that have long connected the American and Armenian peoples.

Raffi Hamparian is the Chairman of the Armenian National Committee of America. For more information on the ANCA’s work on trade issues please visit www.anca.org/trade.