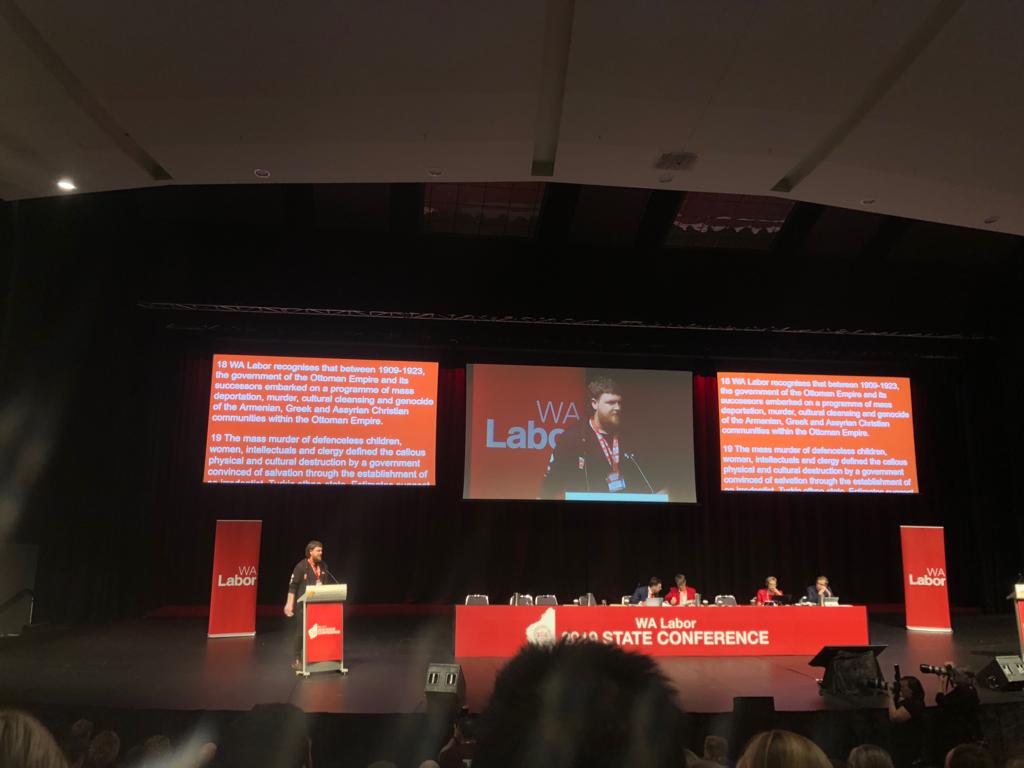 August 24, 2019 News ANC Australia
PERTH: The 2019 State Conference of the Western Australian Labor Party (WA Labor) has unanimously recognised the Armenian Genocide, calling on the state of Western Australia and the Australian Federal Parliament to do the same, reported the Armenian National Committee of Australia (ANC-AU).
Caleb Gardner moved the resolution at the Perth Convention and Exhibition Centre on Saturday 24th August 2019, which was seconded by Rebecca Doyle and voted for by all delegates in attendance, ensuring WA Labor becomes the first senior state branch of any major political party to recognise the Armenian Genocide.

The motion reads: “WA Labor recognises that between 1909-1923, the government of the Ottoman Empire and its successors embarked on a programme of mass deportation, murder, cultural cleansing and genocide of the Armenian, Greek and Assyrian Christian communities within the Ottoman Empire.”

“We can give justice to those murdered by genocide, by saying their names, sharing their stories and acknowledging the circumstances of their deaths. For too long, the wider international community has empowered the denial of these Genocides by not acknowledging them.”

Caleb Gardner, who moved the motion before a packed audience of high-profile delegates, said that it was time the denial stopped.

“What happened to the Armenians, Greeks and Assyrians under the cover of World War I was genocide, and it is time all political parties and governments in Australia follow the examples set by New South Wales and South Australia by recognising these crimes against humanity for what they were. Denial is no longer excusable,” commented Gardner.

Boyadjian said: “On behalf of the Armenian community of Western Australia, I thank Mr. Gardner and Ms. Doyle for their principled standing on such an important human rights issue. The unanimous resolution by the WA Labor conference gives our cause important momentum, for which we are grateful as a community made up largely of descendants of survivors of the Armenian Genocide.”

Kayserian added: “We need to thank those in our community who spread the Armenian story – the bright and the dark – with principled leaders in the greater Australian community. This leads to motions such as this significant one by WA Labor, which makes complicity to deny the Armenian Genocide untenable.”

The Australian Greens and the Centre Alliance (and the since inactive Australian Conservatives) are among prominent cross-bench political parties to recognise the Armenian Genocide.

The youth branches of WA Labor, NSW Liberals, SA Labor and Victorian Labor have also recognised the Armenian Genocide, as has the Labor Women’s Network.

A second motion was debated in the Federal House of Representatives in December 2018, honouring the 70th Anniversary of the UN Genocide Convention, during which six of seven speakers from both major parties called on Australia to formally recognise the Armenian Genocide.