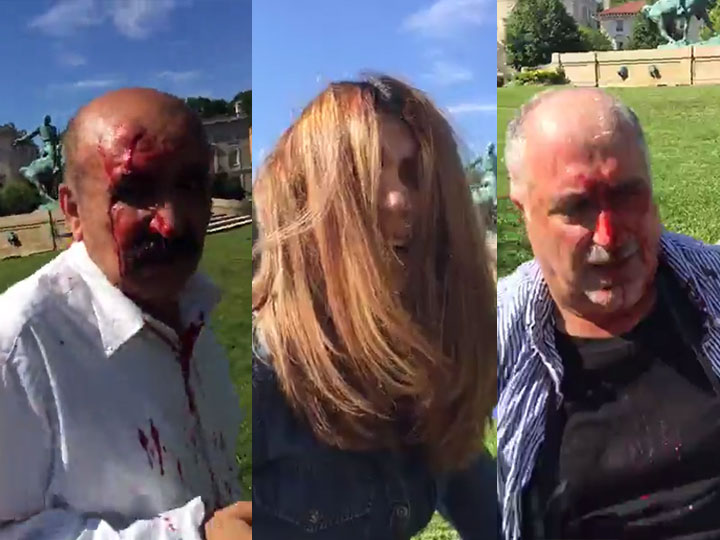 “What we saw yesterday – a violent attack on a peaceful demonstration – is an affront to DC values and our rights as Americans,” said Mayor Bowser in a statement issued earlier today. “I strongly condemn these actions and have been briefed by Chief Newsham on our response. The Metropolitan Police Department will continue investigating the incident and will work with federal partners to ensure justice is served.”

Police Chief Newsham stated, “The actions seen outside the Turkish Embassy yesterday in Washington, DC stand in contrast to the First Amendment rights and principles we work tirelessly to protect each and every day.” Noting that there have been two arrests already in the case, Newsham explained that “we have every intention to pursue charges against the other individual involved.”

“We commend Mayor Bowser and Police Chief Newsham for taking the lead in condemning this vicious attack on peaceful protesters in Washington, DC and look forward to working closely with federal and metropolitan law enforcement officials to ensure that justice is served,” said ANCA Executive Director Aram Hamparian. “President Erdogan may be able to get away with similar attacks and repression in Turkey – but we simply cannot allow him to export his brand of hatred and repression to our nation’s capital or anywhere in the US.”

This afternoon, the State Department announced it was “concerned by the violent incidents involving protesters and Turkish Security personnel on Tuesday evening,” stating that “violence is never an appropriate response to free speech.”

Hamparian condemned the State Department statement as “weak and ineffective – and, frankly, embarrassing.”

“Apparently, as far as the State Department is concerned, there is no line that Recep Erdogan cannot cross,” explained Hamparian. “He sent his goons to DC to rough up Americans and suppress the free speech rights of US citizens, and all the State Department can muster is a generic expression of opposition to violence.”

Hamparian was videotaping live at the scene of the May 16th attack, which took place in front of the Turkish Ambassador’s residence where, according to the Daily Caller, President Erdogan was scheduled to have a closed door meeting with representatives of The Atlantic Council, a leading think tank in Washington DC which receives funding from Turkey.

Hamparian’s video showed pro-Erdogan forces crossing a police line and beating peaceful protesters – elderly men and several women – who were on the ground bleeding during most of the attack.

“The fights flared up after President Erdogan’s arrival at the Embassy residence,” reported Voice of America. “After the first bout of fights died down, Erdogan’s special security forces joined the second stage of fights. Fisticuffs and kicks ensued. The Washington Police Forces had great difficulty in preventing the fights. They had to use batons against Erdogan’s security forces.”

The Turkish language news item is available at:
http://www.amerikaninsesi.com/a/turk-buyukelciligi-onunde-coplu-yumruklu-kavga/3853772.html

Since reporting on the attacks by President Erdogan’s security forces, the ANCA has been receiving threatening phone calls and messages on social media. These intimidation tactics have been reported to the Metropolitan Police and other authorities and are under investigation.

The protests in front of the Turkish Ambassador’s house were a continuation of a demonstration held earlier in the day in front of the White House as President Trump met with President Erdogan. Human rights and religious rights groups were joined by representative of the Kurdish, Yezidi and Armenian communities to call attention to the Erdogan regime’s escalating repression against free press, the Kurdish and other ethnic communities, as well as, Turkey’s ongoing denial of the Armenian Genocide.

Photo Caption: Scenes from the pro-Erdogan forces May 16th attack on peaceful protesters in Washington, DC which left several bloody and at least 9 requiring medical assistance.

D.C. police say they intend to pursue charges against other people involved

Nine people were hurt and two arrests were made after an altercation broke out between two groups at the protest on 23rd Street NW, about a half-mile from Dupont Circle.

According to senior U.S. officials, the men seen beating the protesters were Erdogan’s bodyguards and part of his official party.

“That’s something we will not tolerate here in Washington, D.C. This is a city where people should be allowed to come and peacefully protest,” Metropolitan Chief of Police Peter Newsham said at Wednesday’s press conference.

“We are going to pursue anything that is within our legal powers to hold the folks that were responsible for their actions,” Newsham added.

Press Secretary Sean Spicer had no comment on the reported incident. When asked if President Donald Trump had seen footage from the altercation, Spicer referred to the State Department’s official comment released Wednesday.

“We are concerned by the violent incidents involving protesters and Turkish security personnel Tuesday evening,” State Department spokeswoman Heather Nauert said in a statement. “Violence is never an appropriate response to free speech, and we support the rights of people everywhere to free expression and peaceful protest.”

“We are communicating our concern to the Turkish government in the strongest possible terms,” the statement continued.

The Turkish Embassy released a statement late Wednesday, calling the melee an act of “self-defence” after members of the Kurdistan Workers’ Party provoked people there to see President Erdogan.

“Groups affiliated with the PKK, which the U.S. and Turkey have designated as a terrorist organization, gathered yesterday without permit in Sheridan Circle in the immediate vicinity of the Ambassador’s Residence, while the President of Turkey was visiting the Residence,” the statement read. “The demonstrators began aggressively provoking Turkish-American citizens who had peacefully assembled to greet the President. The Turkish-Americans responded in self-defense and one of them was seriously injured. The violence and injuries were the result of this unpermitted, provocative demonstration. We hope that, in the future, appropriate measures will be taken to ensure that similar provocative actions causing harm and violence do not occur.”

The executive director of the Armenian National Committee of America, Aran Hamparian, witnessed and recorded the incident.

“It was a pretty aggressive assault by people who were very well-prepared. I think they were security or bodyguards or part of that contingent that traveled with President Erdogan,” Hamparian said.

Two men were arrested, including one who was charged with assaulting a police officer. The bodyguards were not among those arrested.

D.C. police say they intend to pursue charges against other individuals involved.

D.C. Mayor Muriel Bowser condemned what she called an “attack” at the ambassador’s residence.

“What we saw yesterday — a violent attack on a peaceful demonstration — is an affront to DC values and our rights as Americans. I strongly condemn these actions and have been briefed by Chief Newsham on our response,” she said in a statement. “The Metropolitan Police Department will continue investigating the incident and will work with federal partners to ensure justice is served.”

“Clearly Erdogan’s guards feel complete impunity, drawing on tools of repression they use at home & knowing he has their back, no matter what,” she wrote.