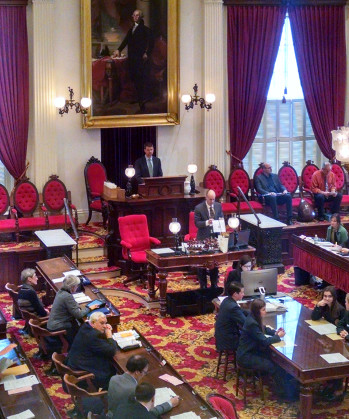 MONTPELIER, VT – The Vermont legislature strengthened the standing of the Green Mountain State as a leader in the genocide prevention movement by unanimously adopting a concurrent resolution (H.C.R. 86) commemorating the Armenian Genocide Centennial and hosting a day-long series of events honoring the victims of this crime against humanity, reported the Armenian National Committee of America – Eastern Region (ANCA-ER).

The legislation was spearheaded on the House side by Representative Joan G. Lenes, who is a descendant of an Assyrian Genocide survivor, and Representative Adam Greshin. Lead Senate supporters of the resolution included Senators Dick Sears, Philip Baruth and Diane Snelling with 14 of 30 Senators cosponsoring the measure.

“It was a wonderful day of people sharing a common past – not forgetting that, yet still learning and looking forward so that we are a better people,” noted Rep. Lenes following passage of the resolution.

Prior to its reading in the General Assembly, Vermont’s own Lokum Band – Jeff Davis, Peter Bingham, and Charlie Jones – played several Armenian musical pieces as part of the devotional exercises, garnering a standing ovation from legislators. Later, Rep. Lenes introduced the Armenian community members in attendance and invited one and all to a noon presentation about the Armenian Genocide by authors Chris Bohjalian and Dana Walrath.

“I was so proud to be a Vermonter today — and I was so proud of the Vermont legislature,” said Bohjalian, whose internationally acclaimed novel on the Armenian Genocide – “The Sandcastle Girls” – was a New York Times best seller. “By recognizing the Armenian Genocide, legislators gave voice to those voices that were forever stilled in Der-el-Zor and Ras-el-Ain and the Dudan Crevasse. Today Vermont helped spread the truth of what occurred a century ago on the Anatolian plains and the Syrian desert, and helped quiet the voice of denial.”

“Today Vermont legislators chose social justice over political exigency,” said Walrath, who recently published “Like Water on Stone,” a verse novel about the genocide that is based on her grandmother’s history. “Shame, pride, and oil are not good enough reasons to deny the Armenian genocide. Their detailed resolution honors those who suffered and those who have worked tirelessly to erase genocide from this earth. This resolution can serve as a model for other states. I am proud to be a citizen of Vermont, a small state with a big heart.”

Following the presentation, ANC Vermont activist Nareg Aghjayan joined with local community leaders in hosting a reception with Armenian delicacies for the over 100 legislators and supporters in attendance at the commemoration.

“The few yet mighty members of the Armenian American community in the Green Mountain State, collectively thank the Vermont General Assembly in unanimously passing Resolution H.C.R. 86 commemorating the Armenian Genocide Centennial,” said Aghjayan. “On behalf of ANC-Vermont and its entire grassroots family, we warmly welcome the continued support of Vermonters on this crucial human rights issue.”

ANCA Eastern Region Chairman Steve Mesrobian concurred. “We applaud the leadership of Representatives Lenes and Greshin and Senators Sears Baruth and Snelling in ensuring the unanimous passage of this historic resolution by the Vermont Legislature. We would particularly like to thank Chris Bohjalian and Dana Walrath for educating generations about the Armenian Genocide through their presentations today and their literary works read across the U.S. and the world. The people of Vermont have spoken on this important topic through their Legislative body and we call on the United States government to follow suit in recognizing the Armenian Genocide, particularly at this important juncture of our nation’s history,” explained Mesrobian.

Offered by: Representatives Lenes of Shelburne and Greshin of Warren

Whereas, from 1915 to 1923, the government of the Ottoman Empire persecuted and executed systematically an estimated 1.5 million Armenians, and

Whereas, this brutal mistreatment became known as the Armenian Genocide and, by 1923, it had resulted in the elimination of the Armenian population in Asia Minor and historic West Armenia, and

Whereas, the Armenian Genocide began on the night of April 24, 1915, when the Turkish government arrested more than 200 Armenian community leaders in Constantinople, the Ottoman Empire’s capital city, and

Whereas, most of the prominent public figures of the Armenian community were summarily executed, and

Whereas, large numbers of Armenian civilians were forcibly deported to the Syrian desert, and many died either en route, at the hands of government-aligned gangs, or from dehydration and starvation in the desert, and

Whereas, in May 1915, the Allied Powers of France, Great Britain, and Russia issued a joint statement charging the government in Constantinople with committing crimes ‘‘against humanity and civilization,” the first time a government-to-government charge of this type was issued, and

Whereas, it is estimated that, by 1918, the Ottoman Empire’s brutal treatment of Armenians had resulted in the deaths of one million persons and made hundreds of thousands of others homeless and stateless refugees, and

Whereas, Raphael Lemkin, the initial drafter of the United Nations Convention on the Prevention and Punishment of the Crime of Genocide and the originator of the term “genocide,” recognized the Armenian Genocide as the type of crime the United Nations should prevent through the establishment of international standards, and

Whereas, historians cite the Armenian Genocide as a forerunner of later human massacres, including the Holocaust, the Cambodian Killing Fields, Bosnia, Rwanda, and Darfur, and

Whereas, on April 24, 2004, Governor James Douglas issued a proclamation recognizing the Armenian Genocide on the 89th anniversary of its initiation, now therefore be it
Resolved by the Senate and House of Representatives:

That the General Assembly commemorates the 100th anniversary of the start of the Armenian Genocide, and
be it further

Resolved: That the Secretary of State be directed to send a copy of this resolution to the Armenian National Committee of Vermont.

Photo: An image of the Vermont State Legislature during consideration of the Armenian Genocide Centennial Resolution.