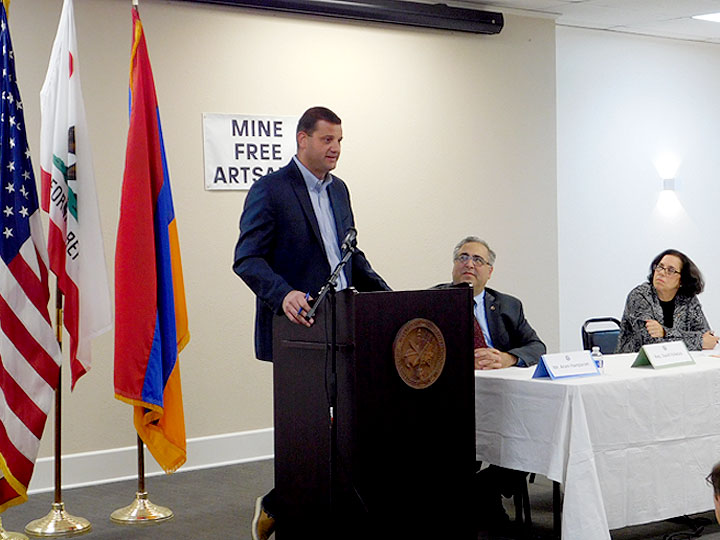 The program featured opening remarks by Poochigian, a presentation by the Congressman, who serves as Co-Chair of the Congressional Armenian Caucus, about his legislative leadership and travel to Artsakh. Also on the agenda was an advocacy update from Hamparian and a lengthy question and answer session. The event, held in the Garo and Alice Gureghian Armenian Cultural Center in Fresno, ended with a robust round of applause for the Congressman’s hard work on behalf of issues of special concern to the Fresno area’s large and active Armenian community.

Earlier this year, the U.S. House adopted the Valadao Amendment, allocating continued U.S. finding to the HALO Trust to complete the removal of landmines and unexploded ordnance from across Artsakh, bring vast tracts of otherwise fallow land back into agricultural production. The de-mining operation also employs hundreds of locals, who have an intimate knowledge of the landscape.

The Hanford-based representative – describing his successful efforts to overcome legislative opposition to his amendment – noted that: ‘Whenever a member of Congress would have an issue with (the amendment), the simple question was ‘what issue is there with removing land mines that are blowing up farms… who is going to argue against that?” Representative Valadao described the process of mine-clearance, during a demonstration by the HALO Trust: ‘These folks spend hours digging around a little land mine just to find it, secure it, and essentially blow it up… To have the opportunity to see them and go through the experience… made me proud to support this effort.’

Rep. Valadao shared with the audience that he was warned not to travel to Artsakh by the State Department, which has traditionally backed Baku’s ban on international visits, but chose to travel there to see, first-hand, the work funded by U.S. taxpayers and sustained through his legislative leaderships. Commenting on being blacklisted by Azerbaijan’s Aliyev regime for making this trip, he noted: “‘I didn’t think being in (Artsakh) would get me blacklisted by another country for doing something that most people would consider as a good thing.”

In his remarks, ANCA’s Aram Hamparian provided background on the Valadao Amendment, reviewing this history of the U.S. aid program to Artsakh and the vital impact of the Congressman’s advocacy in sustaining a major U.S. investment in the peace of a strategically important region. He touched on the material benefits of U.S. aid – ranging from maternal healthcare and clean drinking water to mine-clearance – as well as the moral dimension of America, over Baku’s objections, directing U.S. funds directly to the independent republic.

Both Valadao and Hamparian welcomed the strong statement of support for Artsakh demining from U.S. Secretary of State Rex Tillerson, who affirmed, on the record, that the United States “remains focused on completing the demining as quickly and as thoroughly as possible.’ Hamparian, recalling that appropriations for Artsakh were allocated either without comment or even reluctantly by past administrations, noted that Tillerson’s comments may signal a more constructive approach by the State Department on the question of Artsakh’s self-determination.

As part of the Congressional delegation’s tour of Armenia, the Central Valley Congressman made various visits in Yerevan, including the Armenian Genocide Memorial (Dzidzernagapert) and the American University, where he was particularly impressed by the business and IT programs. Joining Rep. Valadao on his visit to Armenia were Reps. Jackie Speier (CA), Frank Pallone (NJ), Anna Eshoo (CA), Tulsi Gabbard, (HI) and James Sensenbrenner (WI).

Photo: Central California Congressman David Valadao (R-CA) offers a briefing about his trip to Artsakh and Armenia and his amendment to support demining efforts in the region as part of a panel including ANCA Executive Director Aram Hamparian and former Fresno County Supervisor Debbie Poochigian