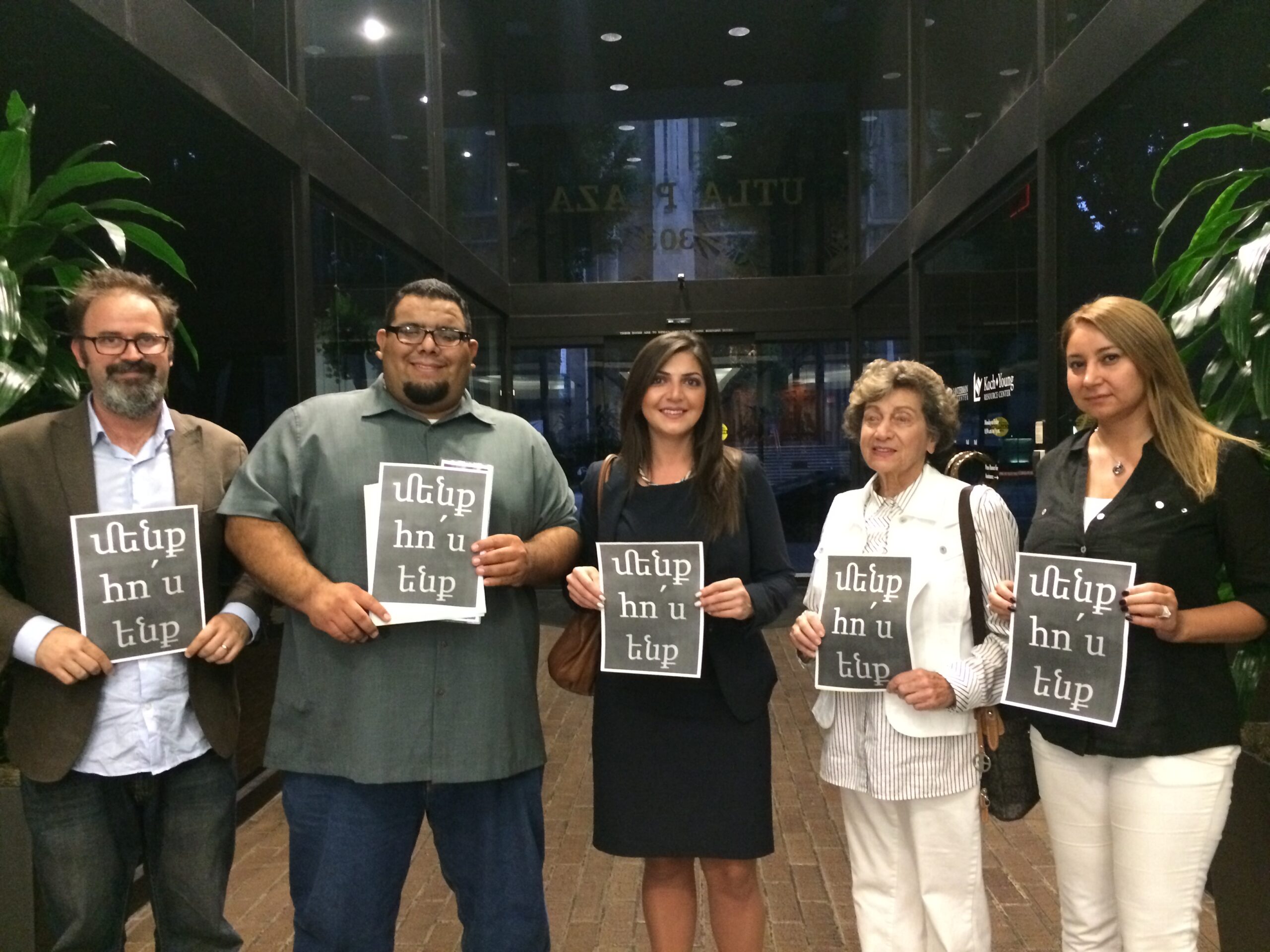 LOS ANGELES – On Wednesday, September 16, 2015, the United Teachers of Los Angeles House of Representatives (UTLA), the policy making body for the nation’s second largest teacher union local adopted a resolution recognizing 2015, as the “Year of Commemoration of the 100th Anniversary of the Armenian Genocide of 1915 and the month of April of every year thereafter as the month of Commemoration of the Anniversary Genocide”, reported the Armenian National Committee of America – Western Region (ANCA-WR).

“Our heartfelt appreciation goes to the UTLA’s leadership and membership for taking this historic and critical step to ensure that the Armenian Genocide is properly taught to the students and staff at LAUSD; and to educators Mr. and Dr. Sean and Suzie Abajian for leading the effort, Jose Lara and many others for their continuous support” stated ANCA WR Executive Director Elen Asatryan. “This motion is particularly important because having the support and commitment of the teachers who are in the classrooms will ensure that genocide studies remains an important part of the high school social studies curriculum. We look forward to working with them and connecting them to the Genocide Education Project in providing the proper materials they may use both in World and American History classes to teach the next generation about the Armenian Genocide,” added Asatryan.

During the meeting, Asatryan took the floor to speak in support of the resolution on behalf of the ANCA-WR, highlighting that the case of the Armenian Genocide is not only a critical component of World History, but perhaps the proudest chapter in American history, during which time the Unites States and the American people helped rescue the Armenian nation through the Near East Relief in its most expansive humanitarian aid effort to date. “All students should be familiar with modern world history and this important part of American history, no matter what their course of study. Study of 20th Century world history would be incomplete without familiarity with the Armenian Genocide, its impact on global events, and subsequent genocides then, and also the manner in which it has shaped and affected the Armenian-American community of California,” Asatryan stated in her remarks. “Your commitment here today to teaching of the subject to faculty and students in Los Angeles Unified School District — notably the extraordinary response of Americans to the Genocide, will do exactly that,” she added before urging the UTLA leadership to echo the message of countless governing bodies, including the California State Legislature, the Los Angeles City Council, Los Angeles Unified School District by conveying its support for a fair, just and comprehensive resolution of this crime against humanity.

Following Asatryan, author, filmmaker, former educator, and ANCA-WR Education Committee Member Kay Mouradian also spoke in support of the resolution, more specifically from an educator’s perspective. Mouradian went on to tell the capacity filled room the story of her mother, who was also a Genocide survivor, the significance in not allowing this important part of history to be forgotten or denied, and the critical role teachers play in preserving history.

Last to speak in support was the Vice President of the El Rancho Unified School District, Jose Lara, who also serves as the Coordinating Committee Member of the Ethnic Studies Now Coalition and is a member of the California Teachers Association and the California Federation of Teachers. In his remarks Lara stated, “This is exactly what our endorsement of the ethnic studies campaign is about. It’s about bringing stories of those who have been oppressed and marginalized. We have a large Armenian community in Los Angeles that needs to be recognized. It’s the 100th anniversary of the Armenian Genocide, and if we look at the world today and what’s going on around us, there are many lessons that need to be learned to understand modern day genocide such as the Armenian Genocide, and what happened to Armenia – so I urge you to pass this motion at this time.”

After closing the in-support comments portion, UTLA President Alex Caputo Pearl asked the membership if there was anyone in the room that would like to speak in opposition. The room remained silent, allowing Lara to make the motion for a vote. One after another, then all together, the UTLA House of Representatives held their signs up high with pride as they voted unanimously in favor of the resolution.

Prior to coming for a full floor vote in the UTLA House of Representatives, the resolution was unanimously passed on August 26, 2015 at a UTLA Area Meeting, and again on September 9 by the UTLA Board of Directors.

Language of the motion passed may be found online by visiting http://www.armenianteachers.org/2nd_largest_teachers_union_passes_motion_recognizing_100th_anniversary_of_the_armenian_genocide

With more than 31,000 members, UTLA is the second largest teachers union local in the nation and one of the most influential. UTLA is comprised of teachers and health and human service professionals that make up the Los Angeles Unified School District throughout the following eight areas: North, South, Harbor, Central, East, West, Valley East, and Valley West. UTLA is affiliated with the two largest national affiliates, the American Federation of Teachers/California Federation of Teachers as well as the National Education Association/California Teachers Association.