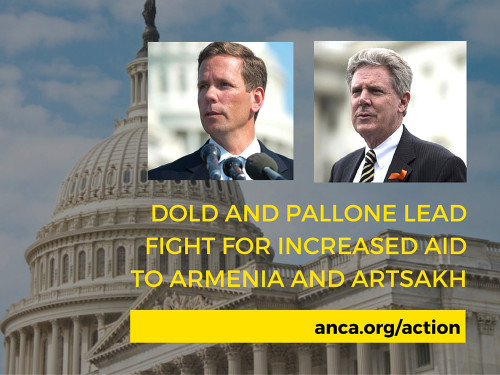 US Reps. Dold and Pallone Call on Congressional Colleagues to Support Artsakh and Armenia Aid Priorities

— Allocate at least $5 million in Fiscal Year 2017 for humanitarian and development programs in Nagorno Karabakh.

— Suspend U.S. military aid to Azerbaijan until its government ceases cross-border attacks, ends its threat of renewed war, and agrees to a settlement of regional conflicts through peaceful means.

— Close gaps in the distribution of need-based aid to at-risk minority populations in Syria, including Armenians; and, ensure the allocation to Armenia of a proportional level of U.S. and international aid supporting the efforts to regional states to resettle those fleeing from Syria.

— Target at least 10 percent of aid to Georgia to fund sustainable job-creation programs in the Samtskhe-Javakheti.

— Narrow the President’s waiver authority of Section 907 restrictions on U.S. assistance to Azerbaijan

The ANCA has shared similar requests with Members of Congress earlier this year and is launching an online campaign, today, calling on Representatives to co-sign the Dold-Pallone letter. To take action, visit: http://anca.org/action.

“Please ask your U.S. Representative to co-sign the Dold-Pallone letter. It’s quick and easy and will make a real difference in lives of those in Artsakh and Armenia who rely upon de-mining, who benefit from healthcare programs, and are fleeing violence in Syria,” said ANCA Executive Director Aram Hamparian. “Simply visit our website at: www.anca.org/action.”

Pro-Armenia advocates from across the U.S. will be traveling to Washington, DC on March 15/16 as part of the ANCA Fly-In for Peace, Prosperity and Justice during which expanded U.S. assistance to Armenia and Artsakh will take center stage, along with a series of other community concerns. The priorities of the Fly-In include:

— Co-Sign the Royce-Sherman Letter: This letter asks President Obama to support the Royce-Engel peace proposals for Nagorno Karabakh during his talks with the Azerbaijani and Armenia leaders. These proposals, backed by the Administration, OSCE, Armenia, and Nagorno Karabakh (but opposed by Azerbaijan) require: 1) The non-deployment of snipers and heavy arms; 2) The addition of OSCE observers, and; 3) The deployment of gunfire locator systems.

— Co-Sponsor the Azerbaijan Democracy Act: This legislation, H.R.4264, imposes U.S. aid, travel, and economic sanctions as well as international lending restrictions upon the Azerbaijani government due to its continued abuse of its own citizens. Azerbaijan’s domestic repression, sadly, reflects and reinforces its regional aggression.

— Support the passage of H.Con.Res.75: This legislation properly condemns as genocide the mass murder taking place today against Christians, Yezides, Kurds, and other at-risk minorities in Iraq and Syria.

— Co-Sign the Dold-Pallone Foreign Aid Letter: This bipartisan letter calls on the leaders of the Appropriations Subcommittee on State-Foreign Operations to support seven foreign aid priorities, including 1) at least $5 million in aid to Nagorno Karabakh, including for rehabilitation centers and regional clinics for children and adults with physical and cognitive disabilities, and; 2) targeted aid to help Armenia settle those fleeing from Syria.

— Call for a U.S.-Armenia Tax Treaty: Please encourage Treasury Secretary Jacob Lew to remove a barrier to the growth of U.S.-Armenia economic relations by negotiating a bilateral Double Tax Treaty.

— Support the adoption of H.Res.154, the Armenian Genocide Truth + Justice Resolution: This bipartisan resolution calls for a reduction in regional tensions and the improvement of Armenian-Turkish ties through a truthful and just reckoning with the Armenian Genocide. If you have not already, please cosponsor H.Res.154, and also call on Speaker Paul Ryan to schedule this genocide prevention measure for a vote.

— Speak out on the Baku/Sumgait Pogroms: Please join with your Congressional colleagues in making a floor speech condemning the Sumgait-Baku anti-Armenian massacres and Azerbaijan’s ongoing blockade and escalating aggression against both Nagorno Karabakh and Armenia.

Reps. Shuster and Cohen argue that “U.S. humanitarian projects in Nagorno Karabakh should be closely coordinated with the government of Azerbaijan. We understand that the training that is provided by the U.S.-funded demining project is being misused for military purposes by the recipients of the training. We are also concerned that there is a lack of transparency in reporting on the demining project.”

Representatives Dold and Pallone, in their letter, remind House appropriators that “the Nagorno Karabakh region has some of the world’s highest per capita land mine accident rates,” and ask the Subcommittee “to reject calls for politicizing critical, life-saving initiatives such as landmine clearance.” The Dold-Pallone letter goes on to ask that the “expansion of humanitarian assistance in Nagorno Karabakh to include support for rehabilitation centers and regional clinics, which serve over 1,000 children and adults with physical and cognitive disabilities every year.”

In February, President Obama issued his FY 2017 budget proposal, calling for a $22.412 million allocation in economic aid to Armenia – a 22% increase over last year’s request, but far less than the $40 million previously advanced by the ANCA and Congressional Armenian Caucus. The FY2017 request for Azerbaijan is $10,936,000. The White House’s proposal did maintain parity between Armenia and Azerbaijan in terms of appropriated military aid, with International Military Education and Training (IMET) assistance set at $600,000 and Foreign Military Finance (FMF) at $1,000,000. President Obama also requested $1,700,000 for International Narcotics Control and Law enforcement for Armenia.