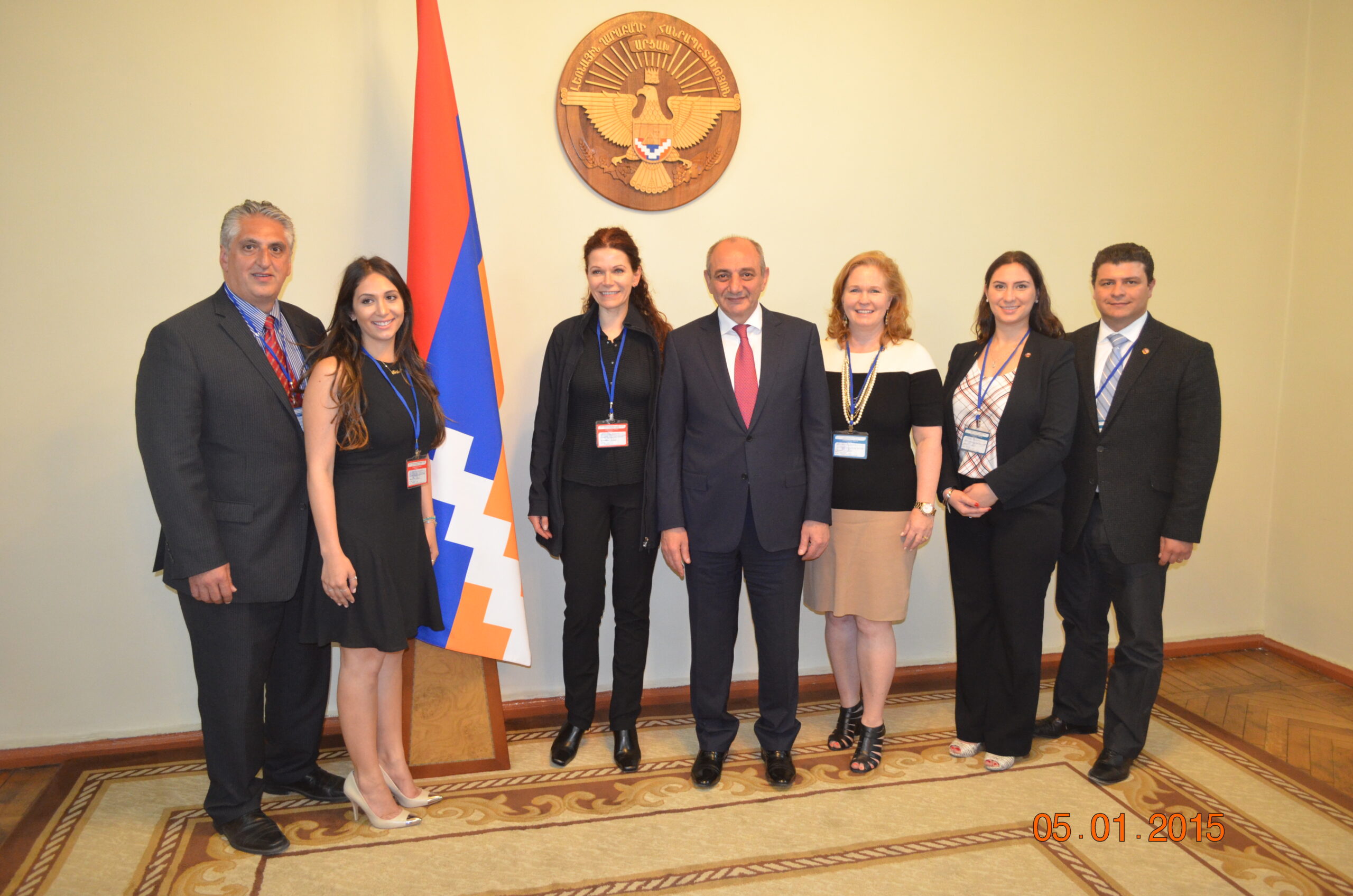 “The electoral process in this Republic is fair and transparent,” stated Nareg Kitsinian, Esq., board member of the ANCA-WR. “As election observers, we witnessed an organically high voter turnout as the citizens believe it is of paramount importance to the continued independence of the Republic that they fought for. As a testament to the Republic’s commitment to the democratic process, this election was conducted with a distinguished level of integrity that would parallel any democratic country in the western world.”

The traveling delegation also used the opportunity to meet with the government’s leadership prior to the election to understand the methodology and process of the elections.

During a meeting with the Chairperson of the Central Electoral Commission, Srbuhi Arzumanyan, the U.S. observation team was able to understand the process of the election and the structure of the polling locations. Observers were particularly impressed by the number of poll workers required at each polling location. During a given election, there are nine poll workers assigned to a location and all must undergo seven days of training in order to qualify as a poll worker. The poll worker positions are not all stipend, rather, the people of Artsakh see this as an important part of their civic duty.

Following the meeting with Central Election Commission, the delegation had the honor of meeting with President Bako Sahakyan where they expressed their gratitude on being invited to observe the election and offer their guidance to further improve the process. The President expressed his and the people’s willingness to hear their recommendation and further assured the observers that they would witness a transparent election.

The delegation also had the opportunity to meet with the Speaker of the Artsakh Parliament, Ashot Ghoulyan and Prime Minister Arayik Harutyuyan to get their perspective on how the election process had changed since the presidential election in 2012. During these meetings they also had the unique insight on how the role the political parties in the country played in affecting voter turnout.

Finally, in meetings with the Republic of Artsakh’s Human Right’s Defender, Yuri Hayrapetyan, observers voiced their concerns over accessibly issues for voters with disabilities. Mr. Hayrapetyan was open to their recommendations and concerns noting that the country is still in the process of making the polls more accessible to those who are physically handicapped.

In a preliminary report issued after the election, the University of California Election Observation and Technical Assistance Team described the elections as “a fair, accurate, and transparent election process.” The full statement can be read at www.ancawr.org/CAArtsakhElectionsReport  (see also below).

As observers they also noted that women in Nagorno-Karabakh were equal participants in the elections in every aspect including participating as voters, poll workers, party representatives, government officials, and candidates. “I am impressed how Artsakh conducted its national elections consistent with international standards, I think there are lessons we in the U.S. can learn from them, especially in terms of voter turnout and civic engagement,” commended Fresno County Supervisor Andreas Burgeas.

Santa Cruz County Clerk Gail Pellerin has offered to continue collaboration to develop the process of elections in the Republic, “I found the election in Nagorno-Karabakh to be fair, accurate, secure, and transparent. The commitment of the voters and poll workers would rival any country. The citizens of this democratic republic are very engaged as demonstrated by the 70.6% turnout in the May 3 election.”

“As someone who has participated in elections in the United States as a poll worker, a member of a campaign, and as a candidate, I am impressed by the level of commitment the people of Artsakh have for their elections,” noted ANCA-WR Government Affairs Director Tereza Yerimyan. “The level of dedication observes witnessed during these elections are representative of the strength of democracy and the commitment to sovereignty the people of Artsakh practice. We in the U.S. can learn from their example in better exercising our right to vote,” she added.

According to NKR Central Election Commission, 70.6% of voters came out for the sixth parliamentary elections of the country,, during which 33 members of parliament were either re-elected or newly elected for a ten-year term. Approximately one hundred and six international observers from 30 countries gathered in the Artsakh Republic to monitor the vote. Observers from the European Union, United States and countries like Zimbabwe and Israel were present. For the first time in Artsakh’s election history, the elections were also observed by scholars and experts from Brazil and Mexico.

The Nagorno-Karabakh Republic (Artsakh) conducted its 6th Parliamentary election on May 3, 2015 with a fair and transparent system consistent with international standards according to a team of nonpartisan academic and subject matter experts from the United States, Mexico and Brazil.

The University of California Election Observation and Technical Assistance Team observers visited with representatives, candidates and party offices, polling stations, and government offices including the Human Rights Defender of the Republic of Nagorno-Karabakh.

On Election Day, observers visited 16 polling stations in six of Artsakh’s nine regions and a regional passport department that assists voters who are not on the voting list. The team also observed the opening and closing processes of polling stations, and witnessed the chain of custody of voted and counted ballots to the district administration center of the Regional Electoral Commission. The team also visited a polling station set up in the country’s only prison where 20 voters were eligible to vote. Prior to Election Day the team visited a polling station set up in Yerevan for Artsakh citizens residing in Armenia including those who are attending either university or military school located there.

Throughout the election, the observers witnessed a fair, accurate, and transparent election process. “The commitment of the voters and poll workers of Nagorno-Karabakh would rival any country” Santa Cruz County Clerk Gail Pellerin said as reports of from the polls showed turnout to be 70% or higher.

Observers also noted that women in Nagorno-Karabakh were equal participants in the election in every aspect including participating as voters, poll workers, party representatives, government officials, and candidates.

The team of observers will prepare a report outlining their findings and make suggestions to improve the electoral process. The preliminary report will include recommendations to implement alternative voting options for voters who are absent from their precinct on Election Day, and those who are not able to get to the polling station.