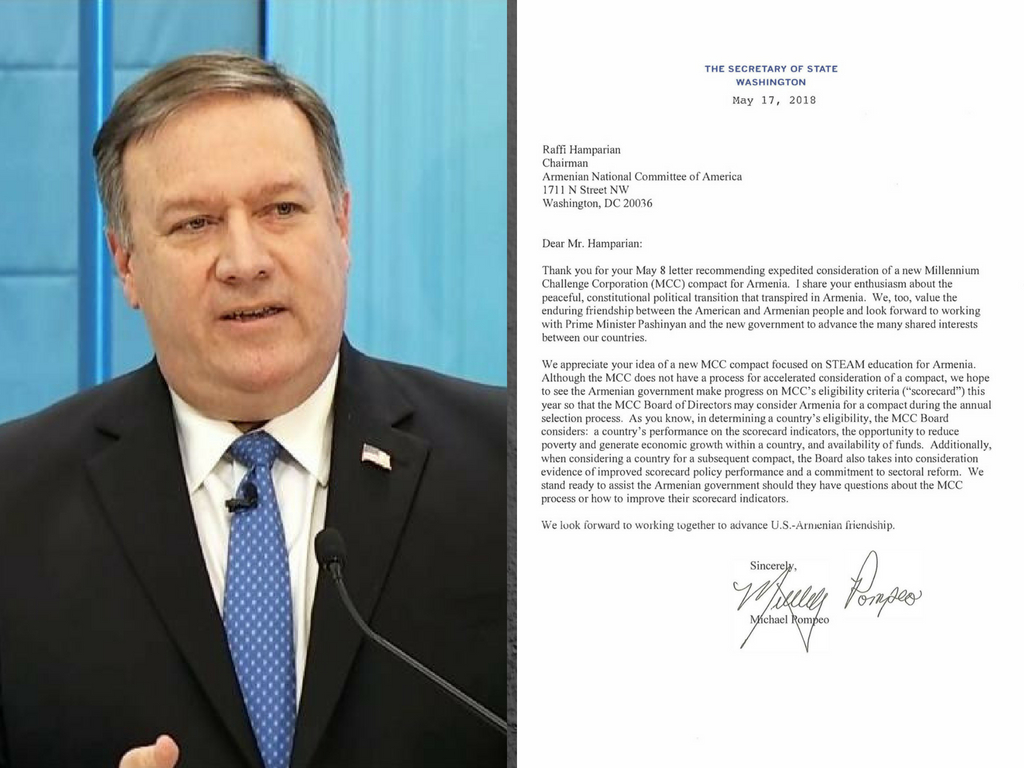 — “We appreciate your idea of a new Millennium Challenge Corporation compact focused on STEAM education for Armenia.” – Secretary of State Pompeo

“We welcome Secretary Pompeo’s enthusiasm for Armenia’s peaceful, constitutional political transition and look forward to working with him and his team to take our bilateral cooperation to a new level,” said ANCA Chairman Raffi Hamparian. “We are confident that – with our continued advocacy and sufficient will on both sides of the U.S.-Armenia relationship – that we will see progress toward a major Millennium Challenge Corporation compact educating and empowering the next generation of Armenian youth.”

The May 17, 2018, letter from Secretary Pompeo came in response to the ANCA’s call upon the Secretary – in his capacity as Chairman of the Board of the Millennium Challenge Corporation (MCC) – to support expedited consideration of a new $140 million Science, Technology, Engineering, Art, and Math (STEAM) grant for Armenia’s public schools.

“We appreciate your idea of a new MCC compact focused on STEAM education for Armenia,” noted Secretary Pompeo, who went on to voice willingness to assist Armenia with the MCC process, while noting that the Corporation does not have a formal process in place for accelerated consideration of compacts. “We hope to see the Armenian government make progress on MCC’s eligibility criteria (‘scorecard’) this year so that the MCC Board of Directors may consider Armenia for a compact during the annual selection process,” noted Secretary Pompeo.

The ANCA recently held a series of meetings with White House and State Department officials and leading Members of Congress advocating for a STEAM MCC compact for Armenia that would, similar to one being implemented in neighboring Georgia, deliver over $75 million for school infrastructure improvements; $30 million for STEAM education projects; and, over $15 million for vocational educational programs to meet the growing demand for information technology professionals. The MCC grant would likely be apportioned over a 5-year period and would be subject to strict oversight by the MCC to ensure the program is benefiting students across Armenia.

The MCC is an innovative and independent U.S. foreign aid agency that is helping lead the fight against global poverty. Created by the U.S. Congress in January 2004 with strong bipartisan support, MCC has changed the conversation on how best to deliver smart U.S. foreign assistance by focusing on good policies, country ownership, and results. MCC provides time-limited grants promoting economic growth, reducing poverty, and strengthening institutions. These investments not only support stability and prosperity in partner countries but also enhance American interests. With cost-effective projects, a lean staff, and an evidence-based approach, MCC is a good investment for the American people.