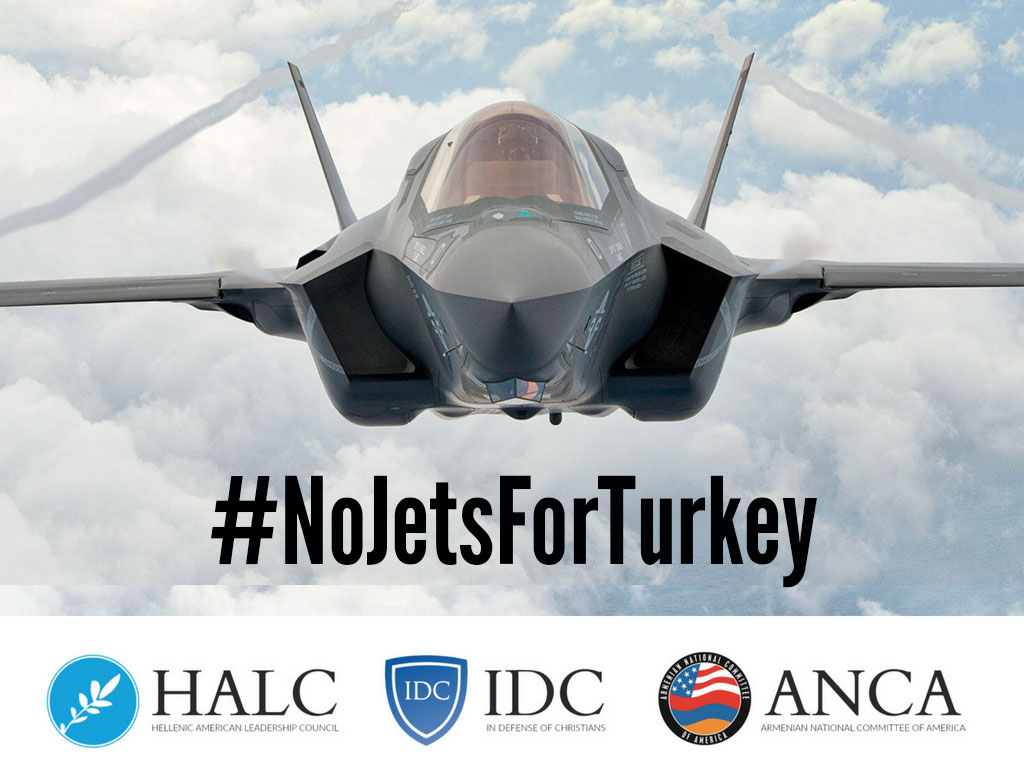 Video of House consideration of the matter is available at:

The Hellenic American Leadership Council (HALC), Armenian National Committee of America (ANCA), and In Defense of Christians praised Members of Congress for their clear and decisive action on this matter.  “We join together in welcoming the overwhelming adoption yesterday by the U.S. House of a powerful bipartisan measure calling for the termination of Turkey’s participation in the production of F-35s, and a ban on the sale of this lethal weapons system to Turkey’s increasingly hostile and anti-American Erdogan regime,” said HALC Executive Director Endy Zemenides, IDC President Toufic Baaklini and ANCA Executive Director Aram Hamparian.

“During his time in office, we have watched as Erdogan has turned Turkey into an authoritarian state, attacking the democratic values that our two nations had shared for many years. He has cracked down on the freedom of the press, thrown innocent people in jail for voicing opposition, and consolidated his grip on power at the expense of Turkey’s democratic institutions,” said Chairman Engel in his opening remarks.  “If Turkey wants to continue as a NATO ally and U.S. partner, it must commit to upholding our shared interests. And if Turkey decides to follow through on its plan to acquire the Russian S-400, then they must not be able to get American F-35s; they must not participate in the F-35 program; and, they must face the consequences of their decision.”

Ranking Member McCaul was equally clear in his message to Turkey.  “Purchasing the S-400 would have unavoidable negative consequences for U.S.-Turkey relations,” said Rep. McCaul.  “By law, the purchase would trigger congressionally-mandated sanctions under the Countering America’s Adversaries Through Sanctions law. The purchase also puts at risk Turkish participation in the F-35 Joint Strike Fighter Program and broader security cooperation, including future U.S. arms sales.”

Noting that Turkey continues to bully the U.S. and NATO allies including Greece and Cyprus, Rep. Bilirakis stated, “rewarding an international bad actor with F-35s, one of the most sophisticated articles of U.S. military technology, while they imprison and orchestrate brazen acts of violence against U.S. citizens, threaten U.S. allies and their sovereignty, and violate international law, sends the wrong message to the enemies of freedom and stability around the world.”