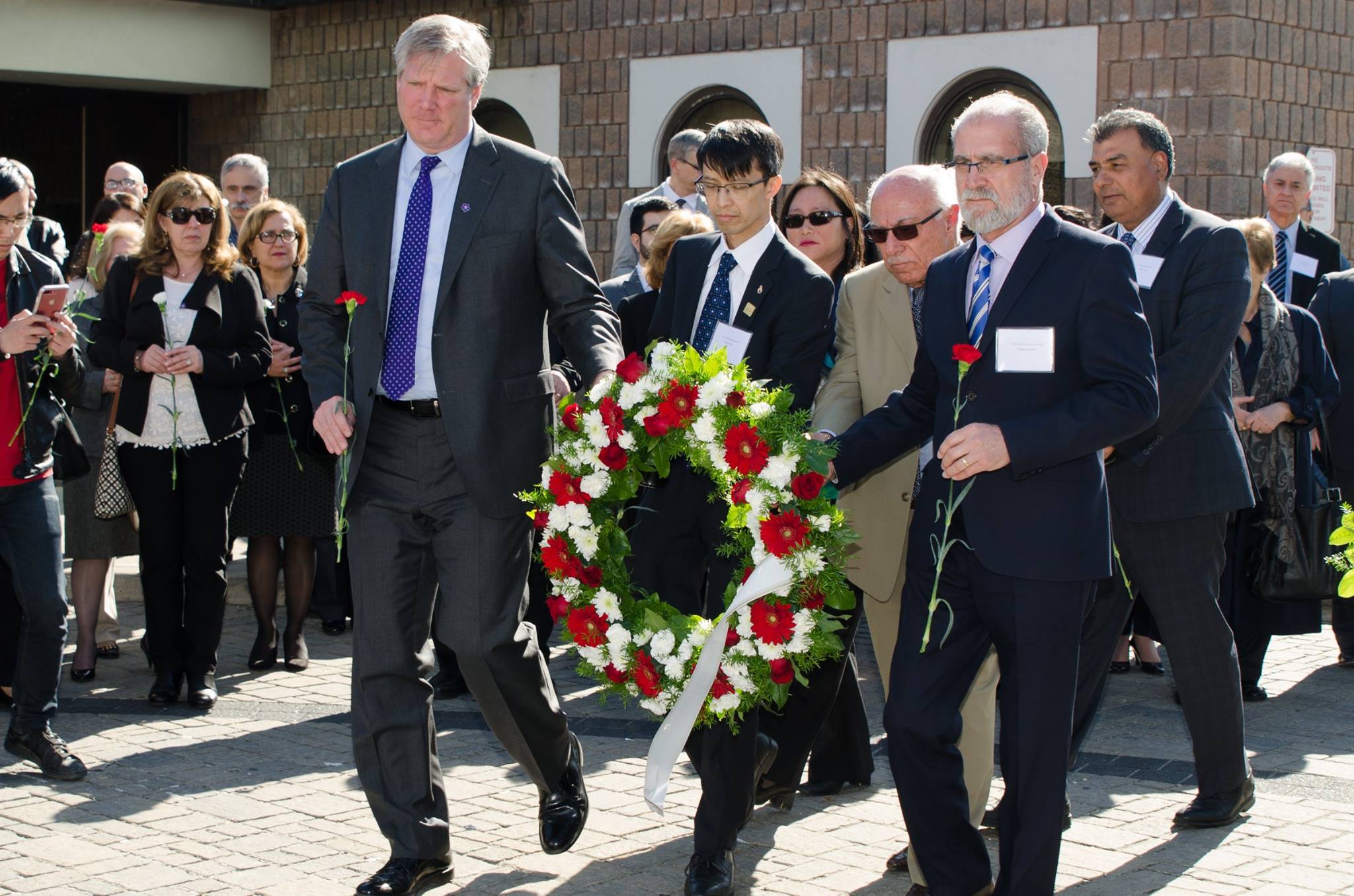 (HORIZON WEEKLY, April 27) Toronto – The Toronto-Armenian community gathered at the Armenian Community Centre on Sunday, April 23 to commemorate the 102nd anniversary of the Armenian Genocide.

The event was attended by politicians from all levels of government including, Arnold Chan, MP for Scarborough-Agincourt and Chair of the Canada-Armenia Parliamentary Friendship Group; leader of the Progressive Conservative Party of Ontario and Leader of the Official Opposition MPP Patrick Brown; Liberal MPP’s Hon. Michael Coteau, Don Valley East, and Soo Wong, Scarborough-Agincourt; City of Markham Mayor Frank Scarpitti; Toronto City Councilor Shelley Carroll for Don Valley East and long-time friends of the Canadian-Armenian community Toronto City Councilor Jim Karygiannis for Scarborough-Agincourt and former MPP and Speaker of the Legislative Assembly of Ontario, David Warner.

Statements by federal and provincial party leaders were read during the event. The parliamentary members and city councilors in attendance also made their remarks to the audience.

The keynote speaker of the afternoon was Dr. John Young, president and chief executive officer of the Canadian Museum for Human Rights (CMHR). In his keynote address, he discussed the CMHR’s purpose and role in educating Canadians about human rights violations, such as the Armenian Genocide, and the great cost to everyone when the collective memory of a tragedy is lost.

“Our collective memory is a fundamental part of the great partnership we have with our ancestors and with the generations yet to come. And this opportunity to remember together is how we keep that partnership alive,” he said.

Dr. Young went on to say the Armenian Genocide is a contemporary human rights issue, particularly because there is still ongoing denial of this atrocity.

“Denial of one human rights violation is a denial of all. When one atrocity is erased from our past, it makes it easier to deny others. This is another reason why it is imperative that not just the Armenian community remembers, but that all Canadians do,” he concluded.

In his opening remarks on behalf of the Armenian National Committee of Toronto, Harout Kassabian said that due to Turkey’s continued slide towards authoritarianism, as seen in the past year during the Turkish purges and April’s controversial constitutional referendum, Canada must promote its democratic values abroad.

“It has become even more important for the leaders of democracy to carry the responsibility of defending truth, justice and fundamental human rights in Turkey,” he said.

The event ended with laying of wreaths and flowers at the Revival monument dedicated to the victims of the Armenian Genocide.

Historians estimate that as many 1.5 million Armenians were killed by the Young Turk government of the Ottoman Empire from 1915-1923.

The Canadian government has recognized this genocide through multiple resolutions and statements, including when the House of Commons unanimously passed Motion M-587 designating April 24th as Armenian Genocide Memorial Day and the month of April as Genocide Remembrance, Condemnation and Prevention Month.

The ANCT is a chapter of the Armenian National Committee of Canada, the largest and the most influential Canadian-Armenian grassroots human rights organization. Working in coordination with a network of offices, chapters, and supporters throughout Canada and affiliated organizations around the world, the ANCT actively advances the concerns of the Canadian-Armenian community on a broad range of issues and works to eliminate abuses of human rights throughout Canada and the world.