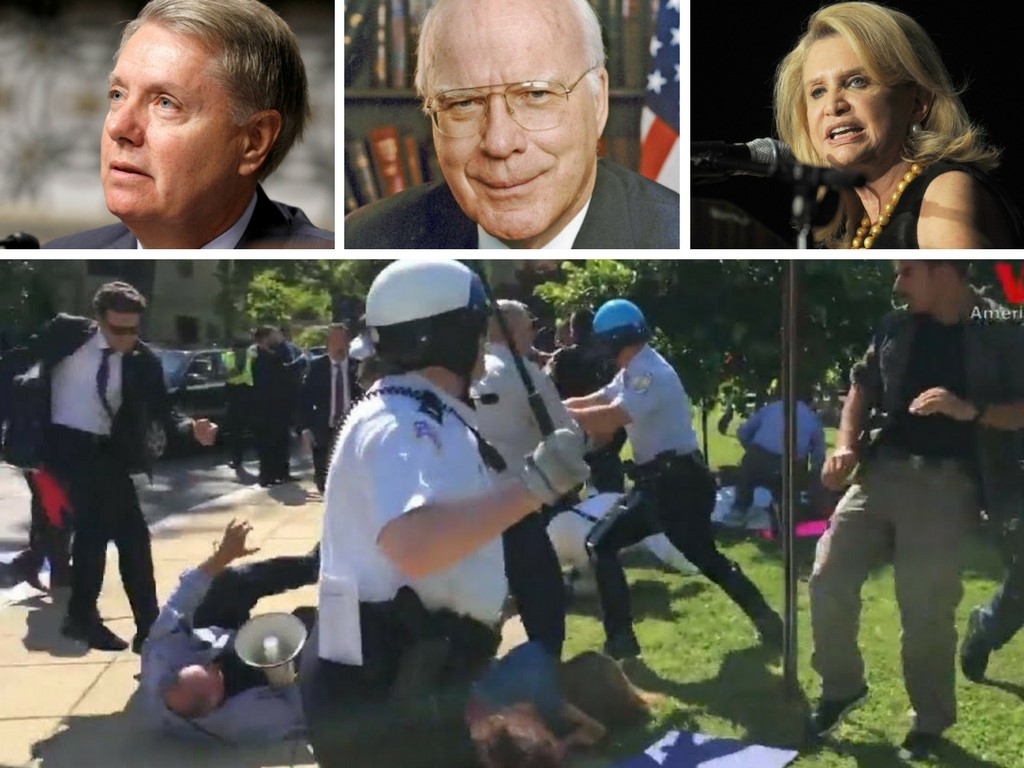 WASHINGTON, DC – Congressional uproar over the May 16th brutal beating of peaceful American protesters in Washington, DC by Turkish President Recep Erdogan’s security forces pushed into a second week, with top U.S. Senate appropriators – Lindsey Graham (R-SC) and Patrick Leahy (D-VT) – threatening to cut US assistance to Ankara if the matter is not given “the highest attention and consideration it deserves by the Government of Turkey,” reported the Armenian National Committee of America (ANCA).

In a May 18th letter to Turkey’s Ambassador, Serdar Kilic, Senators Graham and Leahy stressed: “We would like to remind you that peaceful assembly and freedom of speech are fundamental rights in this country. The aggressiveness and brutality demonstrated by the Turkish security personnel are interpreted by many of us as much more than an attack against peaceful demonstrators – it is an attack against these very rights.” The text of this Senate letter is provided below.

Across the U.S. Capitol, 29 U.S. Representatives, led by Congressional Hellenic Caucus Co-Chair Carolyn Maloney (D-NY), called on the State Department to take swift action and hold perpetrators accountable. “This kind of behavior by a foreign security detail is reprehensible and cannot be tolerated. These actions are not only criminal, they are affronts to U.S. values,” House leaders told Secretary of State Tillerson in their May 19th letter. “Freedom of speech and freedom to protest may be prohibited in Turkey and offensive to the Turkish President, but they are bedrock U.S. principles that must be safeguarded.” The full text of the U.S. House letter is provided below.

These legislators join a broad range of Senate and House leaders who spoke out last week condemning the President Erdogan for the attack, including Armed Services Committee Chairman John McCain (R-AZ) who called for Turkish Ambassador to the U.S. Serdar Kilic to be sent back to Ankara. Congressman Don Beyer, who has previously served in the U.S. foreign service as Ambassador to Switzerland and Lichtenstein, also called for Amb. Kilic’s ouster and signed on to this Congressional letter as well.

To learn more about the Congressional reaction, visit:
https://anca.org/press-release/outrage-escalating-erdogan-attack-peaceful-protesters/

“We would like to thank Senators Graham and Leahy, Representative Maloney and her 28 colleagues, and all the Members of Congress who continue to press for concrete consequences to President Erdogan’s brutal attack on peaceful protesters in our nation’s capital,” said ANCA Executive Director Aram Hamparian. “These Congressional protests need to be followed by serious policy-level actions – starting with the Administration’s immediate expulsion of Ambassador Kilic, a Congressional suspension on all aid to Turkey, and Ankara’s blanket waiver of immunity for any and all involved in this unprovoked assault.”

The ANCA has issued a call for concerned advocates — www.anca.org/erdogan — to reach out to President Trump, Secretary Tillerson, and Senate and House legislators demanding the immediate expulsion of the Turkish ambassador.

“The fights flared up after President Erdogan’s arrival at the Embassy residence,” reported Voice of America. “After the first bout of fights died down, Erdogan’s special security forces joined the second stage of fights. Fisticuffs and kicks ensued. The Washington Police Forces had great difficulty in preventing the fights. They had to use batons against Erdogan’s security forces.”

Since reporting on the attacks by President Erdogan’s security forces, the ANCA has received threatening phone calls and messages on social media. These intimidation tactics have been reported to the Metropolitan Police and other authorities, and are now under investigation.

We write to you to express our profound dismay at the reported attack by Turkish security personnel against peaceful protestors outside your residence during President Recep Tayyip Erdogan’s recent visit to Washington, DC.

We would like to remind you that peaceful assembly and freedom of speech are fundamental rights in this country. The aggressiveness and brutality demonstrated by the Turkish security personnel are interpreted by many of us as much more than an attack against peaceful demonstrators – it is an attack against these very rights. This incident is nothing short of an embarrassment for the Government of Turkey, and an unnecessary and self-inflicted strain on our bilateral relations.

We encourage local law enforcement personnel to prosecute perpetrators of this attack to the fullest extent of the law, and support the expulsion from the United States of any diplomatic personnel involved.

We also ask that you meet with the Department of State, Foreign Operations, and Related Programs Appropriations Subcommittee to discuss this matter further, including potential implications for assistance for Turkey should this matter be given less than the highest attention and consideration it deserves by the Government of Turkey.

We look forward to hearing from you.

On May 16, members of Turkish President Recep Tayyip Erdogan’s security detail were caught on video brutally attacking protesters outside the Turkish Ambassador’s residence in Washington, DC and deliberately disregarding police orders to halt their assaults. The video is incredibly disturbing. We urge you to immediately condemn this outrageous attack in the strongest terms possible and use all tools at your disposal so that these men are denied diplomatic immunity and prosecuted to the fullest extent of U.S. law.

Based on the video of the incident, these Turkish security guards should be arrested, prosecuted and jailed. Numerous members of President Erdogan’s security detail kicked, punched, and trampled people holding posters who were standing in a park that is clearly not part of the embassy. These Turkish security guards kicked men and women crouched on the ground and disregarded numerous commands by police to cease and desist. According to news reports, nine people were hurt, including two who were seriously injured and taken to the hospital. The blooded faces on the video are shocking.

This kind of behavior by a foreign security detail is reprehensible and cannot be tolerated. These actions are not only criminal, they are affronts to U.S. values. Freedom of speech and freedom to protest may be prohibited in Turkey and offensive to the Turkish President, but they are bedrock U.S. principles that must be safeguarded.

Although the State Department’s spokesperson has issued a statement on this matter, more must be done. It is incumbent upon you, as the top diplomat of the United States, to speak out publicly against these actions and, just as importantly, ensure that these men are held fully accountable for their actions.