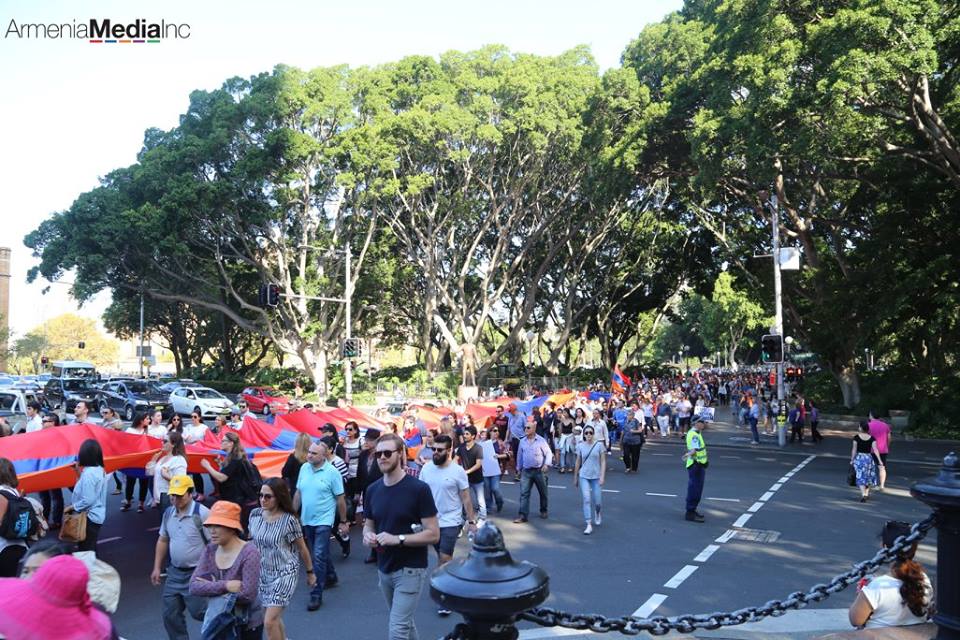 Thousands of Armenians #MARCHFORJUSTICE for the Armenian Genocide in Sydney [VIDEOS]

SYDNEY: Over 3,000 Armenians participated in the second annual #MARCHFORJUSTICE in Sydney’s Central Business District on Sunday April 23rd, 2017, marking the 102nd anniversary of the Armenian Genocide.

The March was led by the Homenetmen Scouting Band, who were followed by clergy and community leaders, Homenetmen Scouts, members from the Armenian Youth Federation of Australia (AYF-AU), the Armenian Relief Society and Hamazkaine, students from Galstaun College and the AGBU Alex Manoogian Saturday School, and members of the Sydney Armenian, Assyrian and Greek communities.

The Sydney March for Justice began at the iconic Hyde Park Fountain, continued along Macquarie Street – where marchers passed Martin Place and the New South Wales State Parliament House – then continued to the very busy Circular Quay in The Rocks, where a Special Program was delivered at First Fleet Park.

Michael Tchopourian presented an address on behalf of the Homenetmen Scouts organisation, presenting his personal family history that traces back to the Armenian Genocide in 1915.

Lena Megerditchian presented a rallying address on behalf of the Armenian Youth Federation of Australia.

Haig Kayserian delivered an English Keynote Address, calling for justice for the Armenian Genocide and explaining the reasons behind the thousands marching in Sydney in the March for Justice.

A traditional solo dance dedicated to the victims of the Armenian Genocide was performed by Hamazkaine Sassoun Armenian Sydney Dance Company’s Maria Khanlarian.

Proceedings ended with a blessing and prayer by Reverend Hagop Sarkissian of the Armenian Evangelical Church and Deacon Nishan Basmajian of the Armenian Apostolic Church, before singer Raffy Adourian led the audience with a passionate rendition of “Hayer Miyatsek”.