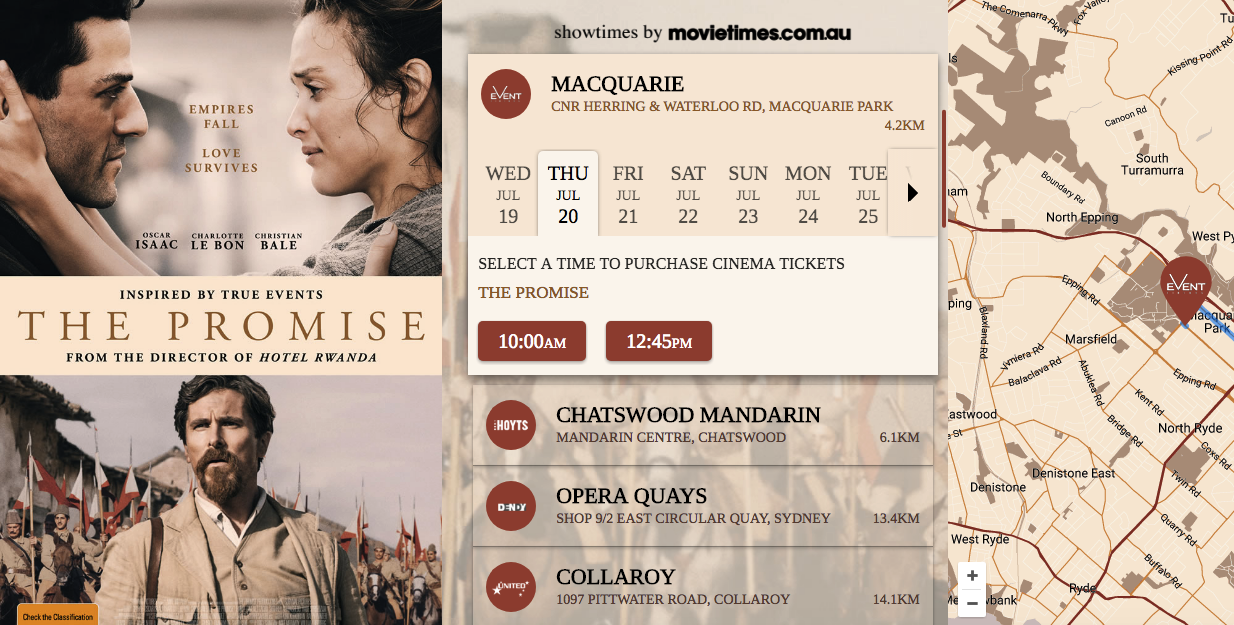 SYDNEY: Armenian Genocide epic, The Promise has surpassed the four-week mark in Australian cinemas and is still continuing in certain theatres across the country.

The film, which is the legacy project of the late Armenian-American benefactor Kirk Kerkorian and stars Christian Bale, Oscar Isaac and Charlotte Le Bon, was brought to Australia by distributors, eOne in mid-June. The Promise Australia Committee was formed – by the Armenian National Committee of Australia (ANC-AU), the Armenian General Benevolent Union (AGBU) and the Armenian Youth Federation – to help market the film, detailing an important chapter in Armenian history.

After organising a successful red carpet Premiere in Sydney, followed by a Premiere in Melbourne, the Committee embarked on an #OperationOpeningWeekend campaign, to help the film’s chances for lasting over one week in movie theatres.

Having achieved that goal, special screenings were also organised by the Uniting Church in Australia, the Jewish Board of Deputies, the Australian Hellenic Council and the Assyrian Universal Alliance.

In subsequent weeks, AYF-AU attracted sponsor-purchases of tickets and free giveaways of said tickets at movie theatres to attract a wider audience to witness the romantic story set against the backdrop of the suffering of 1.5 million Armenians in 1915.

Collective expectations have been surpassed, with the film entering its fifth week with certain cinemas around the country – including Macquarie Event Cinemas, Collaroy Cinemas and Hoyts Entertainment Quarter – still showing limited sessions in week five. The film has remained in the top 30 films shown across the country, despite a release in only 50 theatres and competition including blockbusters like Spiderman, Baywatch, Despicable Me, Wonder Woman and Cars.

Panos Borghonzian (AYF-AU) of The Promise Australia Committee praised the community’s efforts in promoting the film, and thanked all contributors.

“The Promise tells an important story, and for Armenians, it is our story,” Borghonzian said. “We thank eOne for bringing this film to Australian audiences, and all sponsors, organisations and individuals who ensured it would be seen by as many pairs of Australian eyes as possible over the last month.”

For tickets and information on the remaining sessions of The Promise, click here.