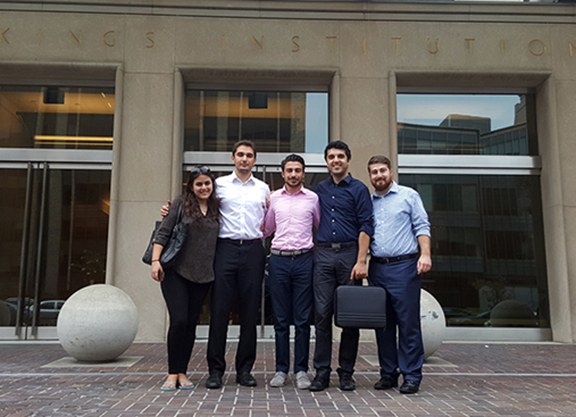 The Importance of Being There: A First-Hand Look at the Many Faces of the Pro-Turkey Lobby in DC

A majority of the work the Armenian community does to advance the cause happens in our own home towns–the meetings with officials, the events that we host, the letters that we write. And then, there are the times that you have to be in the room where the ideas are being shaped and recommendations are being made – on Artsakh, Armenia, the Armenian Genocide and the whole host of community concerns.

The ANCA Leo Sarkisian team learned the importance of our presence in Washington first hand at a “think tank” event we participated in just a few weeks ago. Let me set the stage.

On Wednesday, July 15th, the Brookings Institution, a nonprofit public policy think tank based in Washington, DC, hosted an event titled “Considerations and Constraints for U.S., EU, and Turkish Engagement in the South Caucasus”. The event consisted of a panel of discussants to examine and review one of their own recent publications, “Retracing the Caucasian Circle” as a part of the organization’s Turkey Project Policy Paper Series. The program, which began in 2004, is prepared with the generous support of the Turkish Industry and Business Association (TUSIAD), with Kemal Kirisci serving as the director of the Center on the United States and Europe’s Turkey Project and specifically as the TUSIAD Senior Fellow – but more about that later. Panelists included Director of the Brookings Institution Center on the United States and Europe, Fiona Hill, who is a co-author of the report; US State Department Deputy Assistant Secretary, European and Eurasian Affairs Eric Rubin; Former Turkish Ambassador, Ünal Çeviköz; head of the Political, Security, and Development Section delegation of European Union to the U.S, Klaus Botzet; and, report co-author Dr. Kirisci as moderator.

From the moment Dr. Hill began her overview of the report, the event felt staged. Panelists spoke in broad stroke generalities about the geopolitical importance of the South Caucasus for the West and the need for greater coordinated focus on the region without offering real answers. . “…[W]e cannot shy away from trying to solve the big problems and the big conflicts, but at the same time we have to not let failure to solve those problems prevent progress,” explained Deputy Assistant Secretary Rubin, without offering any real insights into how to address these “big problems” or “big conflicts.” Not a single mention was made about what exactly failed in trying to solve these problems or why they failed. Amb. Cevikoz used the opportunity as a blatant propaganda platform to extol Turkey’s role as “one of the most important actors in the region.” Amb. Cevikoz lamented, “Turkey has been trying to get a resolution to the problems in the Caucasus for 25 years – but in the initial phase of these 25-years, Turkey has been left alone.” Among the chief negotiators of the failed Turkey-Armenia protocols, Amb. Cevikoz would praise Turkey for embarking on the initiative, and while blaming both Armenia and Turkey for its demise, still praising it as a “very important breakthrough” and “historical development.” No mention of Turkey’s disingenuous efforts to connect the Protocols to a pro-Azerbaijan resolution of the Karabakh conflict or the US State Department’s assertions that the ball was in Turkey’s court to move the issue forward.

All this is not surprising if you look at the Brookings Institution Turkey program funders, and specifically, TUSIAD’s broader track record in Washington, DC – as a registered lobbyist. In 2007, at the same time that TUSIAD was funding Brookings research projects on Turkey, they were busy writing an open letter to House Speaker Nancy Pelosi urging her to drop support for H. Res. 106, “Affirmation of the United States Record on the Armenian Genocide Resolution.” In 2008, TUSIAD released a report, arguing against US reaffirmation of the Armenian Genocide, claiming it would result in the downfall of Turkey-US relations and the prevention of the normalization of Turkey-Armenia relations. In 2009, Chairwoman of TUSIAD, Arzuhan Doğan Yalçındağ, sent a letter to President Obama urging him to stay silent on the Armenian Genocide issue and leave its resolution to Armenia and Turkey. TUSIAD would weigh in again in 2010 against Congressional Armenian Genocide reaffirmation. TUSIAD’s funding for Brookings can be traced back to 2007, when, according to the Brookings Annual Report, it had donated between $25,000 and $49,999. In 2012, TUSIAD established a new Senior Fellow position, within the Brookings Center on the United States and Europe, and by 2014, its funding increased to between $250,000–$499,999 annually. TUSIAD has gone as far as listing the Brookings as a partner on its website.

Of course, the Brookings Institution argues that this does not affect the impartiality of their reports or their events. In fact, they feel compelled to stress, in a special spotlighted box on the third page of their most recent Turkey report, “Brookings recognizes that the value it provides to any supporter is in its absolute commitment to quality, independence, and impact. Activities supporters by its donors reflect its commitment, and analysis and recommendations of the Institution’s scholars are not determined by any donation.”

But, I digress. Back to the Brookings event.

Time for discussion during the event was strategically kept to a minimum. The first of only 4 questions taken was given to an Azerbaijani Embassy representative who used it as a platform to attack Armenia — discussing Russian military assistance to Azerbaijan and falsely accusing Armenia of war rhetoic. His diatribe would have been left unanswered if it weren’t for ANCA Leo Sarkisian Intern Erik Khzmalyan, who offered the third question of the day, focusing on Azerbaijan’s increasing ceasefire violations against Armenia and the realities of Azerbaijan’s $3 billion annual military budget – which dwarfs Armenia’s national budget overall. Panelists steered clear of answering either question – instead sticking to the false parity narrative of urging all sides of the Artsakh “conflict” to seek a peaceful solution. But, Eric had set the record straight.

Walking out of the event, each one of us felt a great deal of frustration. This was our first time being exposed to the raw power of Turkey in Washington, DC. No, this was not blatant lobbying by a foreign agent against justice for the Armenian Genocide; but, it was just as effective. The careful staging of the panel discussion in favor of Turkey was evident. From the choice of panelists to the limited questions to the more blatant reality that the moderator is a TUSIAD Senior Fellow — you felt who was driving the agenda.

Along with our feelings of frustration, however, we left feeling motivated and proud that in that atmosphere of what felt like prepaid propaganda, we were able to have the truth heard.

We were left contemplating one question: what if we weren’t in that room?

On our first day in Washington DC, Aram Hamparian, Executive Director of the ANCA, spoke to us about the two ways to gain power in politics; the first is buying your power and the second is earning it. It’s abundantly clear who’s trying to buy power in DC. The Armenian American community, on the other hand, has earned itself the title of one of the most powerful ethnic lobbies in Washington — through grassroots action and hard work. And it all start with us – and in the case of the ANCA Leo Sarkisian Intern, being in that room. The importance of being politically active and engaged, at any level, has proved to be the most effective path for moving our cause forward at this stage. The ANCA Leo Sarkisian interns learned the full truth of this on that day.

I now leave you with one question: next time, will you be in the room?

Photo: Shaunt Tchakmak and the ANCA LSI 2015 team in front of the Brookings Institution