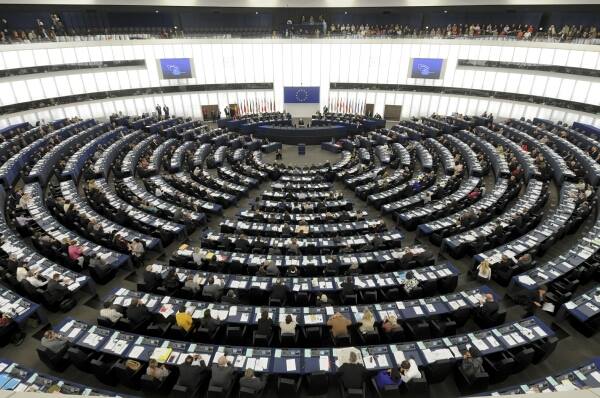 Brussels, Strasbourg. – Today, on September 18th, 2014, the European Parliament with an overwhelming majority adopted a resolution condemning the persecution of human rights defenders in Azerbaijan, affirming its previous resolutions, and calling for targeted sanctions against Azerbaijani President Ilham Aliev’s regime, and visa bans against some who are directly responsible for the oppression.

Azerbaijan was harshly criticized by members of the European Parliament, who stressed the absurd reality of Azerbaijan currently holding the rotating Presidency of the Council of Europe’s Council of Ministers – an institution upholding values of Human Rights and Freedom – whereas, “in the last few years the general Human Rights climate in Azerbaijan has been deteriorating, with a major escalation of government repression, pressure and intimidation directed at NGOs, civil society activists, journalists and human rights defenders”.

MEP Marie-Christine Vergiat (Confederal Group of the European United Left – Nordic Green Left, France) said, that the impunity of Azerbaijan and the Aliev regime should stop, that the EU should not be focused on oil and gas only, and that the Association Agreement with Azerbaijan should not go on. MEP Alexander Graf Lambsdorff (Group of the Alliance of Liberals and Democrats for Europe, Germany) stressed the gruesome fact of the civil society in Azerbaijan, after the continuous and brutal authoritarian regime’s crackdown on fabricated and politically motivated charges. During the speeches by the MEPs, it was mentioned, that a few months ago, Azerbaijani President Ilham Aliev from the podium of the Council of Europe had called his critics liars, and had denied any sort of criticism, while in reality, the situation in Azerbaijan has all the more deteriorated.

The European Parliament resolution “deplores the actions taken by the Azerbaijani Government to curb contacts between civil society and youth activists and intellectuals from Armenia and Azerbaijan, since these contacts are of major importance for bridging the long-standing hostility between the two countries; in this regard, recalls the important work done in this area by Leyla Yunus and her husband Arif”.

Stresses that its consent to the signature of a partnership agreement with Azerbaijan will be conditional on the satisfactory reflection of the above-mentioned requirements, the release of human rights defenders, the withdrawal of legislation restricting the operations of independent civil society, and the cessation of repression and intimidation of NGOs, independent media, opposition forces, human rights defenders and youth and social network activists. Members of the European Parliament stressed, that Azerbaijan should be held accountable for its actions at home, and that a Human Rights should be an inseparable part of the foreign policy of the EU.

The resolution regrets the fact that the EU-Azerbaijan human rights dialogue has made no substantial progress as regards the human rights situation in the country; calls on the EEAS to step up this dialogue with a view to making it effective and result-oriented, and to report regularly to Parliament, and calls on the EU Council and the Member States to urge the International Olympic Committee (IOC) to call on the Azerbaijani authorities to stop the crackdown, and make it clear that it expects them, as hosts of the European Olympic Games to be held next year, to uphold the Olympic Charter’s requirement to respect press freedoms;

Most importantly, the European Parliament recalls its position of 24 May 2012, and calls on the EU Council to consider the possibility of targeted sanctions against those responsible for human rights violations, should these persist.

Kaspar Karampetian, President of the European Armenian Federation for Justice and Democracy (EAFJD) said that finally the European Union is speaking up against the oppressive regime in Baku, and that Commissioner Neven Mimica’s intervention is in the right direction. “We welcome this resolution of the European Parliament. A resolution that upholds the real values of the European Union, while stressing the necessity of sanctions against the regime in Baku. Human Rights shall be considered in all aspects of Foreign Policy; and energy flow to Europe shall not make the EU go blind on breaches of Human Rights and fundamental freedoms”, mentioned Karampetian, and concluded “real democracy in Azerbaijan, respect to the right of self determination of peoples is the only key to solving the long standing conflict with Nagorno Karabakh, and a peaceful co-habitation in the South Caucasus”.