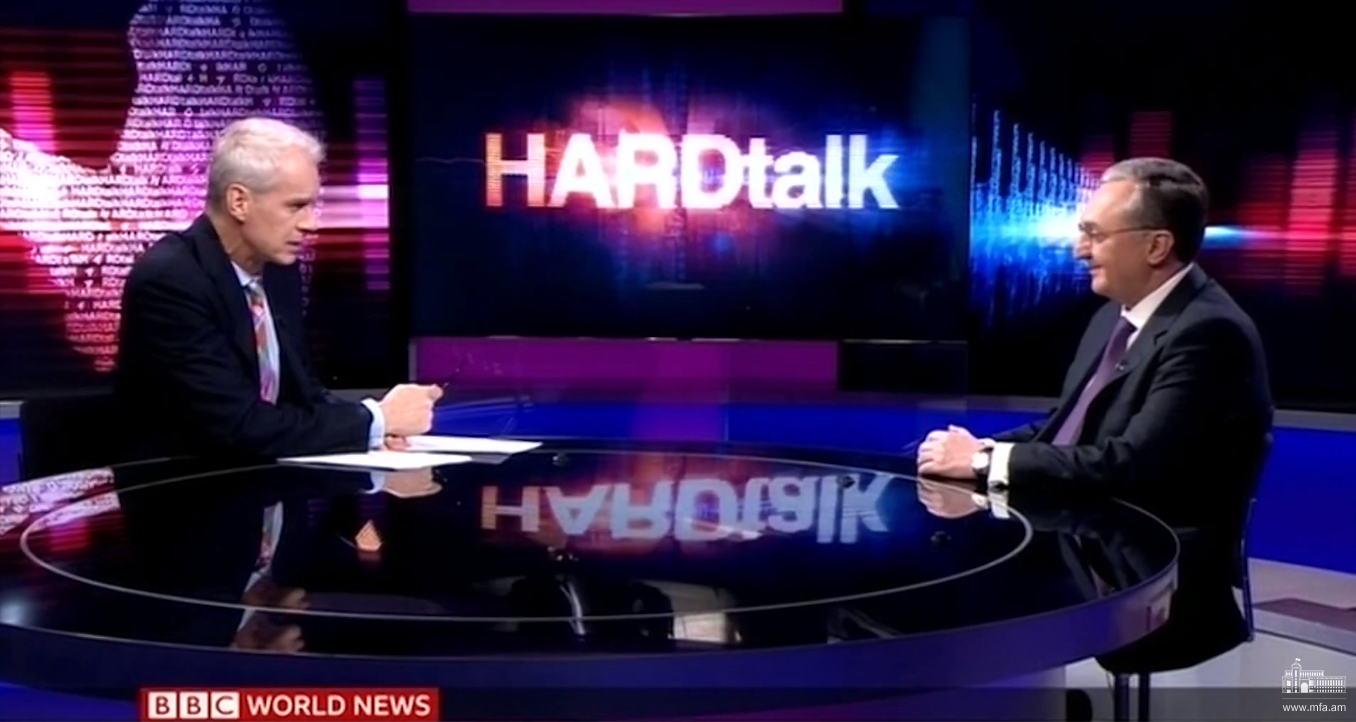 On 24 October 2019, Hardtalk’s Stephen Sackur interviewed the Foreign Minister of Armenia. The interview began by stating the insufficient steps taken by the current government post “velvet revolution” in curbing corruption, establishment of the rule of law, reforms of the judiciary and impartiality of the judiciary.

He went on to a very biased and partial attack on the “disputed territory of Nagorno Karabakh”. He accused the new government of not being imaginative enough or to demonstrate any evidence of bringing new ideas to the conflict. He portrayed Armenia and the people of Nagorno Karabakh as being the aggressor and the main violator of ceasefires, and responsible for very serious abuses, defying International law and United Nation and European Court of Human Rights.

His partiality and biased stance were further proven by his lack of understanding of the serious security issues facing Armenia and Nagorno Karabak(NKR).

He made no reference to historical realities of Armenia or the geopolitical and security challenges facing Armenia. On many occasions the Foreign Minister Mr. Mnatsakanyan tried to highlight the importance of these issues but was met with deaf ears.

Mr Sackur was not sensitive to the following facts:

1- Armenia is a landlocked country surrounded by hostile neighbours Turkey and Azerbaijan, who have both committed acts of genocide on the Armenian population.

2- Turkey has closed its borders with Armenia creating huge difficulties for trade and energy supply. For a country that lacks natural resources like Armenia, the closed borders are very damaging.

3- Because of the hostility from Turkey and Azerbaijan, Armenia has a strategic alliance with Russia for security and energy supply and Iran for energy and trade.

4- The Referendum on Independence of the NKR took place on 10 December 1999, when 99% % of the population voted for independence.

5- It is the inalienable right of all people to have the right for self-determination. By virtue of that right they freely determine their political status and freely pursue their economic, social and cultural development.
Wasn’t it for the protection of these rights that British went to war with Argentina in Falkland Islands in 1982?

6- Today, the delay in International recognition of the NKR only adds to the Azerbaijan’s temptation to solve the conflict by military means, the proof of which was the large-scale aggression unleashed by Azerbaijan against the NKR on April 2016.

7- The interviewer mentioned aggression and several violations from the Armenians but failed to mention the aggressive attack on NKR as recent as in April of 2016 by Azerbaijan and the inhumane treatment of hostages and civilians. Azerbaijan’s armed forces violated the ceasefire along the Line of Contact 250 times in the only in June 2019, releasing over 2,500 gunshots against Armenian defence guards.

The “Four Day War” in April 2016—an outbreak between the two warring parties that killed at least 200 people—ended more than two decades of ceasefire and put the human rights records of Azerbaijan and Armenia into the spotlight. Here are few facts about human rights in Nagorno-Karabakh omitted from the interview:

1. High-ranking Azerbaijani officials have spread hate speech and incited violence against the country’s Armenian minority, according to a 2016 Ombudsman Report. This in turn caused the murder of Gurgen Margaryan on19 February 2004 who was a lieutenant in the Armenian army in Budapest, by Ramil Safarov, a lieutenant in the Azerbaijani army. Safarov was later glorified and honoured by Azerbaijan.

In November 2012, Azeri President Ilham Aliyev took to Twitter to declare that Armenia “is actually a colony, an outpost run from abroad, a territory artificially created on ancient Azerbaijani land.” Public statements like Aliyev’s violate Article 4 (c) of the U.N. International Convention on the Elimination of all Forms of Racial Discrimination, which bars authorities from promoting racial discrimination.

2. Azerbaijani forces ruthlessly murdered civilians when they invaded Nagorno-Karabakh on April 2, 2016. Soldiers shot the elderly, infants and young, and the targeted shelling of residential buildings killed and wounded more than two dozen civilians, many of who were minors. The Ombudsman found Azerbaijan in violation of the Geneva Convention of 1949, which delineates special protections for the sick, wounded and pregnant during war.

3. With the exception of The HALO Trust and the International Committee of the Red Cross, which helps reunite family members who have gone missing in combat, the international community provides little support for human rights in Nagorno-Karabakh. Many NGOs know that entering Nagorno-Karabakh would make them ‘persona non grata’ in Azerbaijan, preventing them from returning in the future. One exception is the Lady Cox Rehabilitation Center that despite Azeri threats has been able to provide help individuals with disabilities and victims of the wars with Azerbaijan in 1990s and 2016.

The Armenian National Committee of UK understands that the BBC’s Hardtalk is a hard-hitting program that scrutinises the interviewee, however, certain bias were demonstrated by Mr Suckar, which defied objectivity and impartiality of the program. Let’s put matters in perspective:

Both in number of population, current territories, natural resources and their aggressive expansionist strategy (in Northern Cyprus and most recently demonstrated in Northern Syria) have unparalleled strength to Armenia. To portray Armenia as an aggressor in the region is simply a misrepresentation.

Azerbaijan has become a major oil supplier to the west in recent years. American and British companies including Exxon Mobil and BP have invested an estimated $35bn in its oil and natural gas fields and the country’s importance has grown in expense of Armenia and NKR.