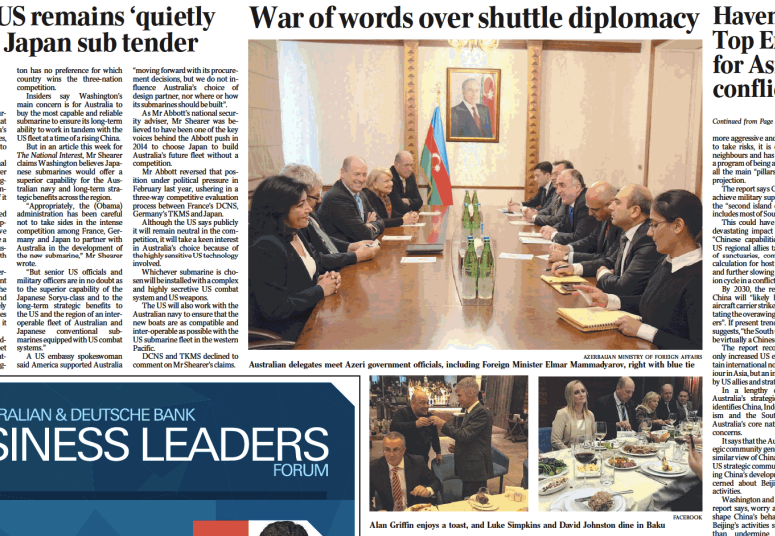 The Australian shines light on Azerbaijan’s wooing of Federal politicians

CANBERRA: The Australian newspaper’s Weekend edition has reported on Azerbaijan’s efforts to gain a “diplomatic edge” over Armenia and the Armenian National Committee of Australia by treating “Federal politicians and their wives … to expenses-paid, business-class trips to Azerbaijan.”

Furthermore, in the article titled ‘War of words over shuttle diplomacy in Azerbaijan’, Azerbaijan’s Ambassador to Australia, Rovshan Jamshidov has admitted that gaining Australia’s firm backing in the Nagorno-Karabakh dispute was “one of the main reasons” for opening a Canberra Embassy in 2013.

Simpkins came under fire by the Armenian National Committee of Australia (ANC Australia) recently, when he rose in Australia’s Parliament to condemn the self-determined Republic of Nagorno-Karabakh as “illegally seized” territory belonging to the Aliyev dictatorship of Azerbaijan. This statement was delivered as a Constituency Statement, when The Australian confirms there are only four Azeri-born constituents in Simpkins’s electorate of Cowan.

The Australian quotes ANC Australia Executive Administrator, Arin Markarian on this point: “Simpkins … is wined and dined in Baku, and all of a sudden develops an intimate knowledge of Caucasus geopolitics — intimate enough to take a hardline anti-Armenian view … without once visiting Nagorno-Karabakh or Armenia to talk to the other side.”

Markarian added: “You can forgive Armenian-Australians for thinking something smells fishy about Simpkins.”

In MP fiduciary reports obtained by ANC Australia, it is confirmed all entertainment and accommodation expenses on these trips are covered by “the government of Azerbaijan”.

Markarian commended The Australian on shining a light on this “questionable” form of diplomacy exercised by Azerbaijan.

“We have tried to ask these questions to Mr. Simpkins, but he has avoided us. He couldn’t avoid The Australian, but yet, he still wasn’t able to answer the questions raised by its reporters and the Australian public,” said Markarian.

Markarian added: “A Parliamentarian from Western Australia, which hardly has any Azeri population, is invited to Azerbaijan. His fiduciary report of the trip reveals his on-ground expenses, including accommodation and meals, were all paid for by the ‘Parliament of Azerbaijan’, which in itself is a funny concept in a dictatorship ruled by the same family since Soviet time.”

“Then Simpkins returns to Australia and speaks in Parliament about the ‘illegal occupation’ by ‘aggressor Armenians’ of Nagorno-Karabakh.”

“The Armenian National Committee of Australia and the Armenian community of Australia finds it preposterous that the native people of a land, who have exercised their rights to self-determination after years of abuse faced by a foreign dictatorship, are now called ‘illegal occupants’ of their native land… by an Australian politician who is only interested in meeting representatives of the Azerbaijani side of this conflict after a sojourn to Baku.”

The article “War of words over shuttle diplomacy in Azerbaijan” was printed on Page 4 of The Australian for 23 January, 2016.

To read it online, visit http://www.theaustralian.com.au/national-affairs/foreign-affairs/war-of-words-over-shuttle-diplomacy-in-azerbaijan/news-story/cc00e1b58f8b21db3e9613aabbcd5f28.