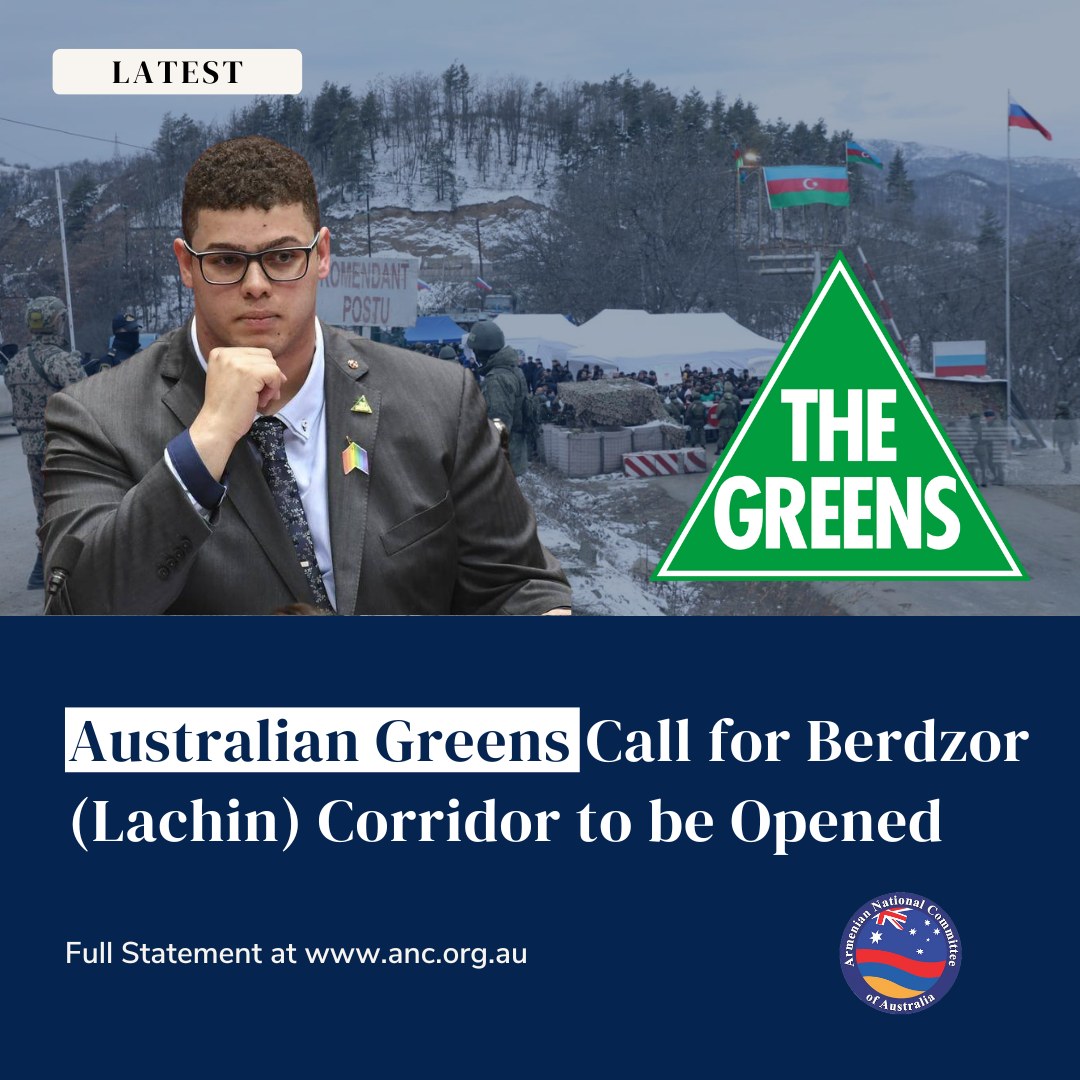 The Australian Greens Call for Berdzor (Lachin) Corridor to be Opened

Cross-bench political power, The Australian Greens have taken to social media to call on Azerbaijan to re-open the Berdzor (Lachin) corridor to ensure free movement and security, reported the Armenian National Committee of Australia (ANC-AU).

In response to the ANC-AU’s appeal, the foreign affairs spokesperson of what is the largest cross-bench political party in Australia’s Federal Parliament, Senator Jordan Steele-John, raised concern over the serious humanitarian consequences as a result of Azerbaijan’s blockade of Artsakh.

The statement in full reads: “The closure of the #Lachin Corridor could cause severe humanitarian implications. The Greens call on Azerbaijan to urgently re-open the corridor to ensure free movement and security, and most importantly, to prevent this crisis escalating.”

Senator Jordan Steele-John’s tweet can be found by clicking here.

Senator Jordan Steel-John’s statement comes two weeks after being briefed on Azerbaijan’s ongoing occupation of territory inside the sovereign borders of the Republic of Armenia by the visiting former Human Rights Defender of Armenia, Dr Arman Tatoyan.

The Republic of Artsakh’s Permanent Representative in Australia, Kaylar Michaelian, added praise on behalf of the government he represents.

Michaelian said: “We thank The Australian Greens for standing with the people of Artsakh and for their ongoing commitment to their human rights during this extremely difficult time.”

ANC-AU Executive Director Michael Kolokossian said: “The Australian Greens have always utilised their influential and well-respected voice in Australian society to raise awareness about the plight of our compatriots in Artsakh. We will continue to work with the Australian Greens and all political parties from across the aisle to advance the interests of our brothers and sisters.”

On behalf of the over 50,000-strong Armenian-Australian community, the Armenian National Committee of Australia has also appealed to the country’s Foreign Affairs Minister, Senator the Hon Penny Wong and Shadow Foreign Affairs Minister, Senator the Hon. Simon Birmingham for their statements following the Berdzor (Lachin corridor) closure by Azerbaijan three days ago.