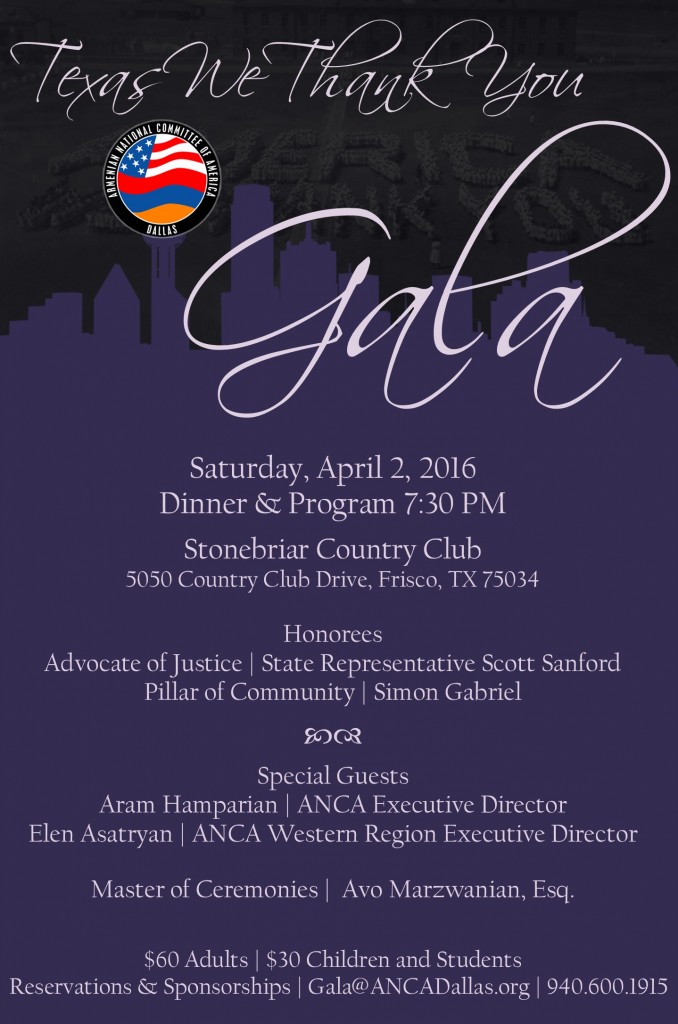 “Texas We Thank You” Gala Set for April 2

The Armenian National Committee of America – Dallas (ANCA-Dallas) announced this week that the much anticipated “Texas We Thank You” Gala, a celebration of century long Texas-Armenia friendship, will be held on Saturday, April 2, 2016 at 7:30 PM. The gala will be held at the beautiful Stonebriar Country Club in Frisco, TX.Texas We Thank You Gala Final

“We are excited to pay tribute to our state for its long support of our community, as well as celebrate the first anniversary of our young but dynamic chapter,” remarked Lucia Nazarian, ANCA-Dallas Chair. “Our activism in the Centennial year of the Armenian Genocide was very productive and we look forward to further educating and motivating our community on Armenian issues in years to come.”

“Texas We Thank You” Gala, inspired by ANCA Western Region’s “America We Thank You” initiative, will honor supporters of the Armenian Community, as well as Celebrate Armenian American’s contribution to the great State of Texas. The Gala will feature special guests, including legislators, local community leaders, as well as the organization’s Aram Hamparian, Executive Director of ANCA, and Elen Asatryan, Executive Director of ANCA-WR.

“We are proud of our dynamic chapter in Dallas as they continue on their mission in uniting the community around our collective cause. The Texas We Thank You Gala follows Colorado’s similarly-themed September 2015 gala that drew in hundreds of community leaders and supporters. The event is organized in the spirit of gratitude and renewed commitment in the post-Centennial era as we continue our march for justice,” stated ANCA Western Region Executive Director Elen Asatryan.

Among the gala honorees is Texas State Representative Scott Sanford, who has demonstrated strong dedication to raising awareness about the Armenian Genocide. He will receive the Advocate for Justice award.

The community honoree of the event is Simon Gabriel, a long-time Armenian American leader in Dallas who has supported local and national causes for decades. He is a civil engineer by training and was the President of an international investment and real estate company as well as served on the board of several International and US companies. In 1991 he was commissioned as Honorary Secretary of State of Texas. Gabriel was among a group of individuals who helped establish the Saint Sarkis Church in the Dallas area, as well as supported the efforts of the ANCA.

In addition to honorees and speakers, the Gala will include dinner and cultural program. Tickets for the event are $60.00 and $30.00 for students. To reserve seats or for sponsorship opportunities call 940-600-1915 or email gala@ancadallas.org.

ANCA-Dallas is a chapter of ANCA-WR, the largest and most influential Armenian American grassroots advocacy organization in the Western United States. Working in coordination with a network of offices, chapters, and supporters throughout the Western United States and affiliated organizations around the country, the ANCA-WR advances the concerns of the Armenian American community on a broad range of issues.

Since its founding in 2015, ANCA-Dallas has co-organized Advocacy Day in Austin, helped pass Texas House Resolution 1541 in praise of Near East Relief 1915-1930 efforts to save “Armenians threatened with genocide in Turkey,” helped defeat anti-Armenian resolutions in the Texas legislature, hosted an information booth at the annual Dallas ArmeniaFest in October, and organized a grassroots talk in December.

The ANCA-WR initiative “America We Thank You: An Armenian Tribute to Near East Relief” is a movement to recognize the outpouring of generosity by the American people from the onset of the Armenian Genocide (1915-1923) and for 15 consecutive years, and to highlight the efforts of Near East Relief in rescuing and providing assistance to hundreds of thousands of men, women and children who were victims of the Genocide. For more information about AWTY visit www.americawethankyou.org.