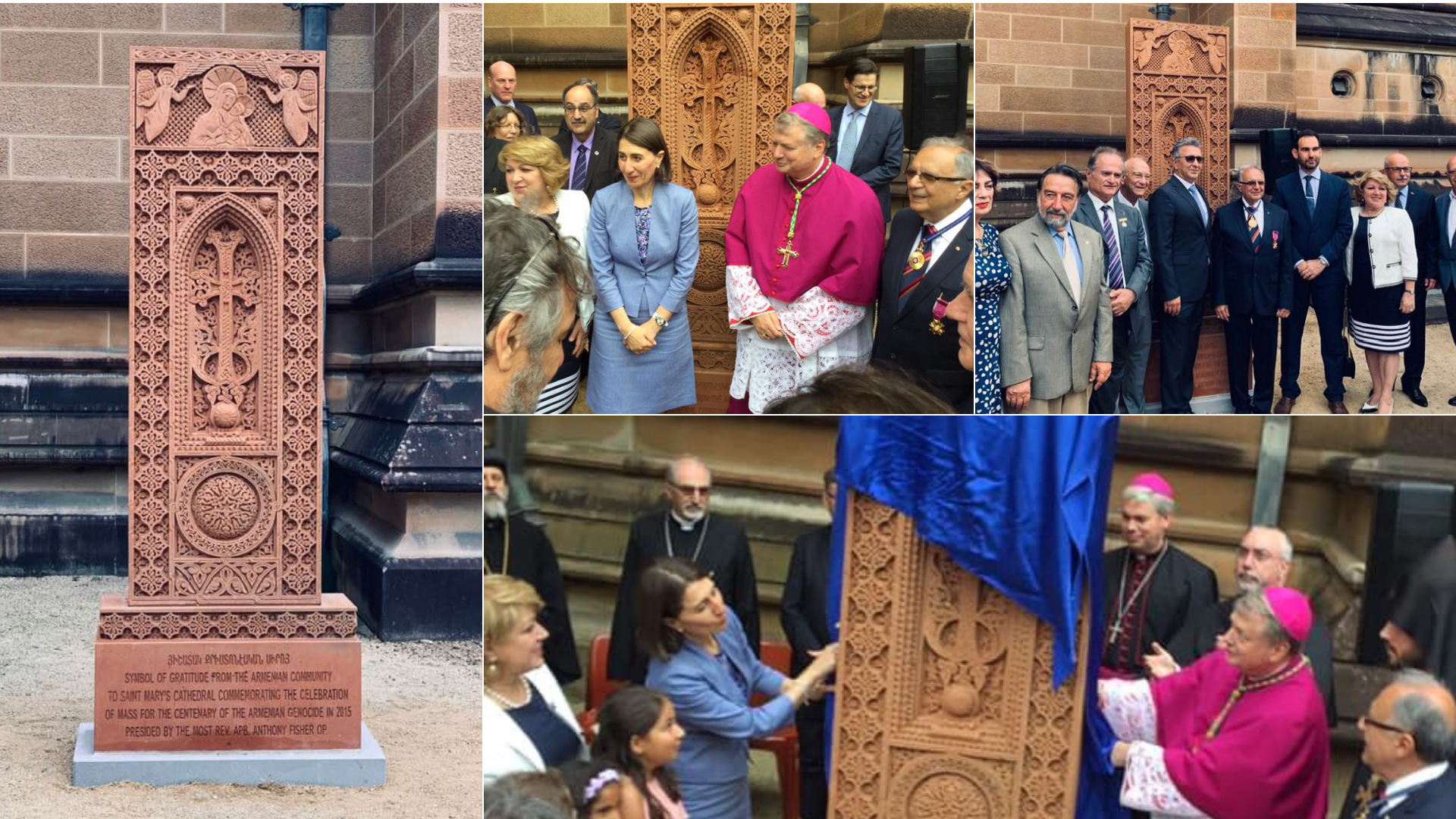 SYDNEY: The Catholic Archbishop of Sydney, Most Reverend Anthony Fisher OP has declared “we remember the Armenian Genocide” in a meaningful message during the unveiling of an Armenian Khachkar (Cross Stone) on the grounds of the iconic Saint Mary’s Cathedral in the centre of Sydney, on Tuesday 18th December 2018.

Sydney’s leading Catholic Bishop, Archbishop Fisher and NSW Premier Gladys Berejiklian presided over the unveiling and blessing of the Khachkar monument, which was donated by Dr. and Mrs. Stepan and Hilda Kerkyasharian as a “symbol of gratitude from the Armenian community to Saint Mary’s Cathedral for commemorating the celebration of Mass for the Centenary of the Armenian Genocide in 2015”.

Archbishop Fisher, who also presided over that historic Mass in 2015, used this address – to an audience of parliamentarians, clergy and community leaders – at the unveiling, to highlight the historical significance of such monuments.

“A monument is built then, not simply to remind us of our past, but to remind us to learn from it. To warn us against repeating past mistakes or recommitting past atrocities,” Archbishop Fisher said. “We also remind, indeed warn ourselves of the dangers of forgetting what has come before. The dangers of allowing past horrors to be forgotten and remade.”

“‘Who now speaks of the Armenians?’ asked a particularly infamous German Corporal turned politician [Adolf Hitler] dismissively in 1939, as he planned another genocide,” Archbishop Fisher added. “Today’s monument answers, we do! Here in Sydney, we remember the Armenian Genocide. We speak of it. We will not forget it. Surrounded by a great company of martyrs, we resolve to honour them by committing to do all we can to ensure deaths like theirs are never repeated.”

“Archbishop Anthony Fisher could not have been more unequivocal and clear in his message on what was a historic day for our community,” Kayserian said. “Armenians the world over are thankful for the leadership shown by the Catholic Church in helping us honour those who fell victim of the Armenian Genocide, especially since the Centenary Commemorations of 2015.”

“From Pope Francis’s rejection of the use of euphemisms when referring to the Armenian Genocide, to Archbishop Fisher’s message in Sydney today, Armenians know the Catholic Church to be an honest friend in Christianity, and in the pursuit for justice,” Kayserian added.

Premier Gladys Berejiklian praised the vision of Dr. and Mrs. Stepan and Hilda Kerkyasharian, and thanked Saint Mary’s Cathedral and the Catholic Diocese of Sydney for allowing such an important monument in such an iconic position in the state of New South Wales.

Stepan Kerkyasharian, who served as a State Commissioner for three decades, thanked those who assisted in making this vision a reality, including the Khachkar’s sculptor, Artak Hambardzumyan, who had flown in from Armenia to witness the historic unveiling. Kerkyasharian reserved special praise for Archbishop Fisher.

“On behalf of the Armenian community, we thank you Your Grace, for this historic expression of good will,” Kerkyasharian said. “May this Stone continue to be a reminder to the passer-by, to pause for a moment and reflect on life.”