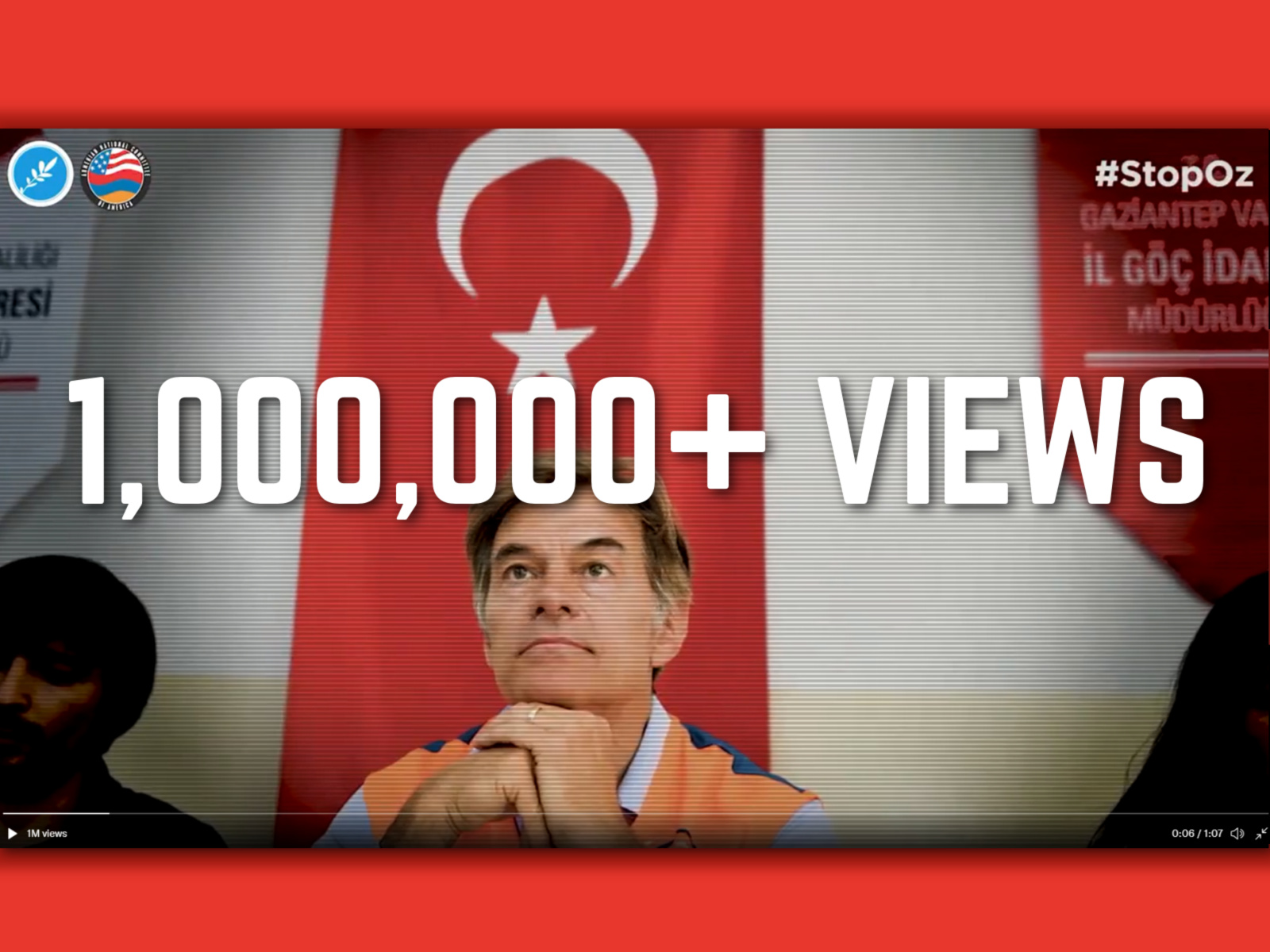 A hard-hitting video – posted by the Armenian National Committee of America (ANCA) and the Hellenic American Leadership Council (HALC) – has been viewed over 1,000,000 times in its first 48 hours online – educating the American public and Pennsylvania voters about the dangers of Dr. Mehmet Oz’s controversial candidacy for an open Senate seat from the Keystone State.

“We’re seeing growing alarm across Pennsylvania – driven in large part by ANCA coalition advocacy with the Hellenic American Leadership Council – over Dr. Oz’s troubling ties to Turkish dictator Recep Erdogan,” said ANCA Executive Director Aram Hamparian. “It was encouraging to see our most recent video reach 1,000,000 views so quickly among Democrats, Republicans and independents who share our commitment to the integrity of the U.S. Senate.”

“Dr. Oz’s candidacy has been defined by false pretenses – pretending to be a Pennsylvanian when he actually lives in New Jersey, pretending to dispense medical advice when he is actually peddling snake oil,” said Hellenic American Leadership Council Executive Director Endy Zemenides.  “That serial dishonesty is what raises the red flags with regards to Oz’s ties to the Erdogan autocracy. The Washington Post first raised these issues in February, and the fact that Oz has failed to address them is alarming.  People all over America – who know full well what influence a single senator can have – are rightly asking: Who Is Oz?”

The video is part of a broader Hellenic and Armenian American national and Pennsylvania grassroots efforts to raise awareness about Dr. Mehmet Oz’s ties to Turkey’s repressive Erdogan regime, the national security implications of having a dual Turkey-US citizen elected to the U.S. Senate, and Dr. Oz’s disconcerting connections to deniers of the Ottoman Turkey’s genocide committed against its Armenian and other Christian populations.

These concerns have been spotlighted in news coverage by NBC News, the New York Post, Forbes, Daily Wire, Daily Caller, and Breitbart, among others.  “For Americans of Armenian heritage – having spent the better part of the past century working, successfully, to end U.S. cover-ups of Turkey’s genocidal crimes – it would represent a betrayal of the worst kind, a shameful rollback of America’s commitment to human rights, to send to the U.S. Senate an ally of Erdogan, the world’s foremost Armenian Genocide denier,” explained Hamparian, in an op/ed in The Washington Times.  The ANCA has also called for a US Department of Justice investigation into whether Oz may be in violation of the Foreign Agent Registration Act (FARA) of 1938 for his endorsement agreement with Istanbul-based Turkish Airlines, through which Oz provides “consulting services, certain media, and in-flight film appearances.”

On the local level, the ANC of Pennsylvania continues its statewide grassroots campaign to ensure voters know the truth about Oz’s ties to the Turkish government and Erdogan-aligned stakeholders and can make informed choices at the ballot box.

“The ANC of Pennsylvania has expressed its concerns over Oz’s candidacy from the very beginning. Deeper ties to the Turkish government and its interests are uncovered every day. Pennsylvanians deserve a senator who will represent our interests – not those of dictator Recep Erdogan,” explained ANC of Pennsylvania co-chair Nora Kzirian.


ANCA Letter to US Department of Justice:
https://anca.org/assets/pdf/050322_ANCA_DOJ_MehmetOz.pdf

— The Washington Times: “The Wizard of Oz: ‘Pay No Attention to the Dictator Behind the Senator’”
https://www.washingtontimes.com/news/2022/may/6/wizard-oz-pay-no-attention-dictator-behind-senator/