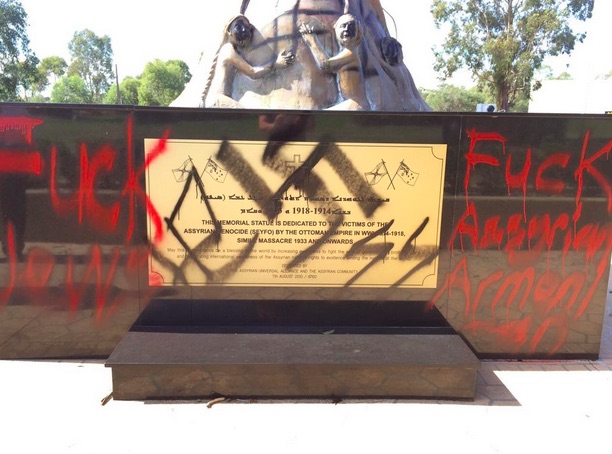 The Armenian National Committee of Australia condemns the vandalism of the Assyrian Genocide Memorial in Fairfield, NSW.

This act of racial hatred, which has been directed towards the Jewish, Armenian and Assyrian communities, has seen expletives used to refer to the aforementioned ethnic groups. The monument has also been desecrated with Nazi swastikas.

ANC Australia deplores such racist attacks in the multicultural state of New South Wales. The vandalism of this monument – a monument dedicated to the memory of the victims of the Assyrian Genocide – was carried out hours after the NSW Jewish community gathered to mark Yom Hashoah, Holocaust Remembrance, and days before the Centenary of the Armenian Genocide.

There is no place for racial hatred and bigotry. The Jewish, Armenian and Assyrian communities have suffered the worst form of racial hatred in the last 100 years – genocide. Such memorials are designed to pay homage to the extensive loss of life that has scared the pages of humanity.

We call on authorities to full investigate this matter and hold the perpetrators to account, and will be working with them to ensure this is done.