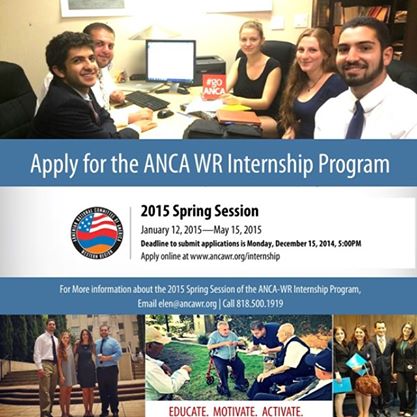 “When I initially applied, I never thought I would be drafting project proposals, speaking in frontspring 2015 internship flyer of my city council members, preparing website content, while meeting and having the opportunity to network and work with such a diverse group of community leaders and members. This experience has really allowed me to grow in more ways than I ever thought possible,” stated former ANCA WR intern Stephen Ghazikhanian.

As part of the program, interns will work directly with the Executive Director, ANCA-WR staff, and with the various committees that the ANCA-WR comprises and will gain experience in non-profit management, government affairs, community organizing and education, media relations, and planning and executing events.

In addition to individual and joint projects, interns will participate in workshops featuring a variety of guest speakers including public officials, ANCA leadership, and specialists from the community. In successfully completing all internship program requirements, participants may receive school credit.

“My involvement with ANCA has opened more doors for me than I would have ever expected. I was only sixteen when I first walked into the ANCA Glendale office as an inexperienced and shy intern. At a very young age, I met elected officials and community leaders, worked on several projects with my internship class, and made lifelong friends. My internship was a life changing experience. Since then, I have worked on several local political campaigns and worked as staff for ANCA Western Region,” said former intern Ani Nazaryan.

For more information about the 2015 Spring Session of the ANCA-WR Internship Program, please e-mail the program coordinator at elen@ancawr.org or call 818.500.1918. To read about some of the experiences and reflections of former interns, visit www.ancawr.org.

Established in Summer 2006, the ANCA Western Region Internship Program is a selective part-time leadership program, which introduces high school seniors, college students, and recent college graduates to all aspects of the public affairs arena. The program provides an opportunity for student leaders and activists to gain an in-depth understanding of the American political system, Armenian-American issues and advocacy efforts on the local, state and federal levels.