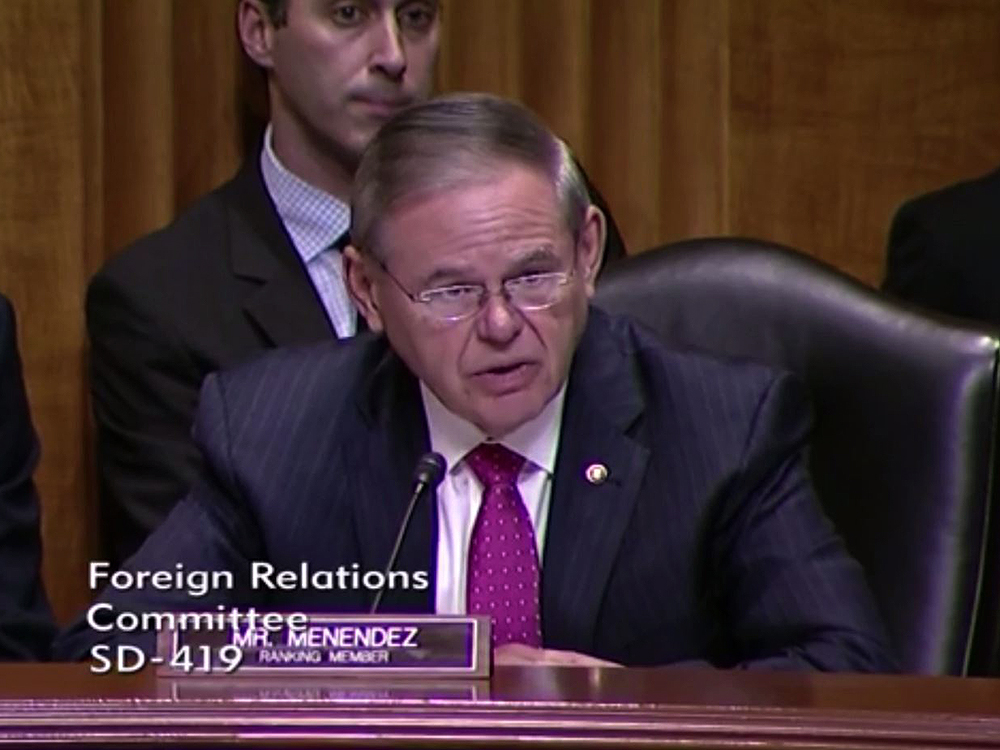 WASHINGTON, DC –Senate Foreign Relations Committee Ranking Democrat Bob Menendez (D-NJ) grilled U.S. Ambassador-designate to Azerbaijan Earle Litzenberger today about President Aliyev’s “bellicose rhetoric and sporadic outbursts of violence,” securing from the nominee a commitment that he would urge the Azerbaijani government to step back from any threatening behavior that disrupts the line of contact, reported the Armenian National Committee of America (ANCA).

“If confirmed, what steps will you take to urge the Azerbaijani government to step back from its threatening behavior and permit necessary monitoring along the line of contact,” asked Senator Menendez during a Senate Foreign Relations Committee nomination hearing. Litzenberger responded that the U.S. is working along three lines – the non-use of force, respect for territorial integrity, and the right to self-determination. Litzenberger noted that the OSCE Minsk Group Co-Chairs condemn “any violence and any threat of the use of violence along the line of contact,” without specifically citing Azerbaijan’s attacks. In response to a follow up question from Senator Menendez as to whether he would, as U.S. Ambassador to Azerbaijan, “urge the Azerbaijanis to step back from any threatening behavior that disrupts the line of contact,” Litzenberger responded, “that’s a fair statement, sir.”


“We want to thank Senator Menendez for securing a commitment from the State Department that our next U.S. Ambassador to Azerbaijan will press the Aliyev regime to step back from its threatening and violent conduct,” said ANCA Executive Director Aram Hamparian.

Video of Senator Menendez’ exchange with Litzenberger is available at:

Mr. Litzenberger’s complete testimony before the committee is available online at:
http://anca.org/assets/pdf/100418_Litzenberger_Testimony.pdf

“I am one of them who believes that in cases such as Cyprus, unless we reconcile ourselves with the past, it is difficult to move forward,” began Senator Menendez in his questioning of U.S. Ambassador to Cyprus nominee Judith Gail Garber, who, only after three clear and pointed questions by the Senator, acknowledged that Turkish troops currently occupy Cyprus. “I appreciate the nuances,” stated Menendez, “but there are just certain things that are just real. Turkish troops that were not existent prior to this time [on the island] invaded Northern Cyprus and have continued to be there. And it makes it among the most militarized places in the world … I gather that you are constrained but this always baffles me, in terms of not just recognizing simple facts.” Sen. Menendez went on to ask Ms. Garber regarding access to Turkish zones where missing Greek and Cypriot persons may be buried. Ms. Garber responded that, if confirmed, “I will work to ensure that the Committee on Missing Persons is able to have access to all burial sites and expeditiously conclude its work.”

Video of Senator Menendez’ exchange with Garber is available here:

“Along with our Hellenic allies, we were grateful for the Senator’s aggressive line of questioning on Cyprus, which revealed just how very afraid U.S. leaders remain of crossing Ankara’s red lines against any honest discourse on its occupation of Cyprus and obstruction of justice for the Armenian Genocide,” noted Hamparian.