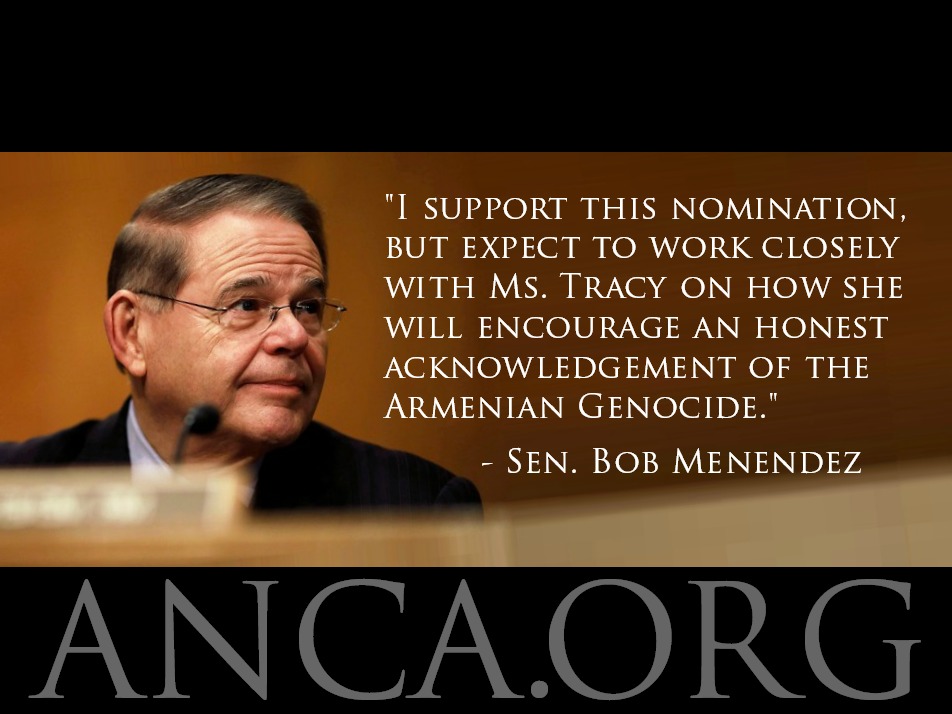 Senator Menendez Pledges to Work with U.S. Ambassador to Armenia on Securing “An Honest Acknowledgement of the Armenian Genocide”

— Commits to Continued Dialogue with U.S. Ambassador to Azerbaijan on Reducing Aliyev Threats

In statements during the Committee’s December 13th business meeting, which approved both nominees and set the stage for full Senate votes, Sen. Menendez noted his support for both candidates, but also shared his clear expectations.

“Throughout my time in the Senate, I have advocated for an honest accounting of the Armenian genocide. I believe we have a moral imperative to recognize the atrocities that were committed against the Armenian people,” stated Sen. Menendez. He went on to note, “I support this nomination, but expect to work closely with Ms. Tracy on how she will encourage an honest acknowledgment of the Armenian Genocide, support Armenia’s ongoing efforts to ensure accountable, citizen-responsive governance, and support efforts to reach a peaceful settlement of the Nagorno-Karabakh conflict.”

During Ms. Tracy’s December 4th confirmation hearing, Sen. Menendez offered a rapid-fire series of questions regarding the Armenian Genocide, and commenting on by Ms. Tracy’s reticence to properly reference crime, stated: “This is the problem with nominees who come before us, and it’s not you particularly. In fact, we have a historical reality: 1.5 million people were massacred. That’s Genocide. And yet, we send an Ambassador to a country and have them go to a memorial of a holocaust of the Armenian people and they won’t be able to call it genocide. It’s pretty ironic. If we are not able to acknowledge the past, we are destined to relive it.” 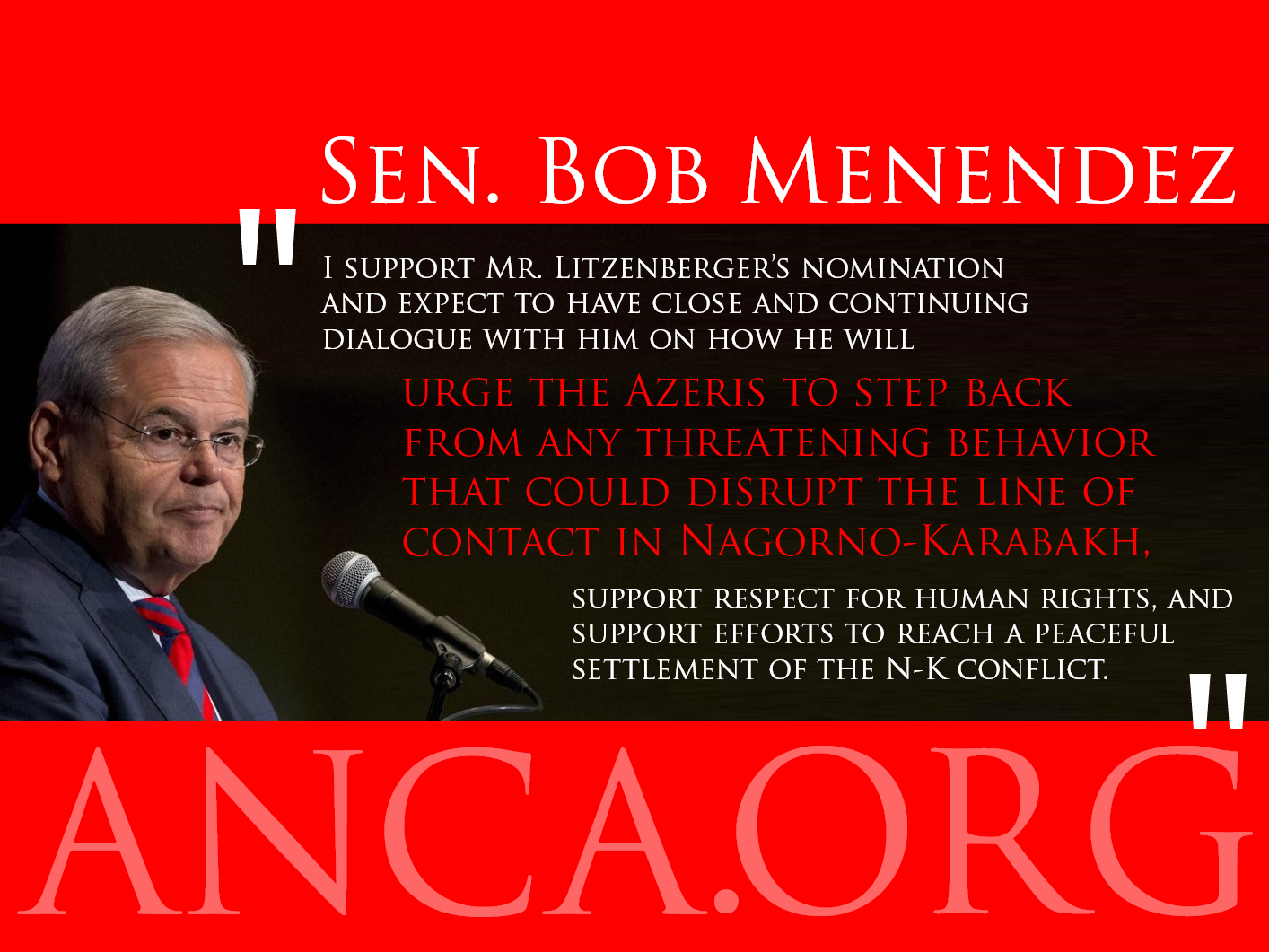 Video from the exchange is available at:

During the December 13th Committee vote, Senator Menendez also commended Armenia on its recent parliamentary elections. “Armenia and the Caucasus region will continue to be vital to regional and global security,” stated Senator Menendez. “According to the OSCE, Armenia’s elections over the weekend met international standards. I look forward to supporting the government’s efforts to build strong democratic institutions, a vibrant Armenian economy, and oppose any efforts to violate Armenia’s sovereignty.”

With regard to the U.S. Ambassador to Azerbaijan nominee, Sen. Menendez stated, “I support Mr. Litzenberger’s nomination and expect to have close and continuing dialogue with him on how he will urge the Azeris to step back from any threatening behavior that could disrupt the line of contact in Nagorno-Karabakh, support respect for human rights, and support efforts to reach a peaceful settlement of the N-K [Nagorno Karabakh/Artsakh] conflict.”

During the October 4th confirmation hearing, Senator Menendez grilled Mr. Litzenberger about President Aliyev’s “bellicose rhetoric and sporadic outbursts of violence,” securing from the nominee a commitment that he would urge the Azerbaijani government to step back from any threatening behavior that disrupts the line of contact.

Video from that exchange is available here:

Following the hearing, both Senator Menendez and Senator Ed Markey (D-MA) submitted written questions to Mr. Litzenberger. At Senator Menendez’ urging, the Committee consideration of his nomination for two weeks, to allow for additional inquiries regarding controversial statements by National Security Advisor John Bolton calling for arms sales to Azerbaijan and Armenia.

“We want to thank Senator Menendez for his robust exercise of the Senate’s ‘advise and consent’ responsibilities regarding both nominees, and also for his commitment moving forward to serious and sustained Congressional oversight of Ambassador-designate Tracy’s effort to end U.S. complicity in Turkey’s denial of the Armenian Genocide, and Ambassador-designate Litzenberger’s willingness to forcefully confront Azerbaijan’s threats to regional peace,” said ANCA Executive Director Aram Hamparian.

The Senate is expected to confirm Ms. Tracy and Mr. Litzenberger as early as next week. A delay of the Senate vote to 2019 would mean starting the nomination process from square one, leaving the ambassadorial posts to the two countries vacant.