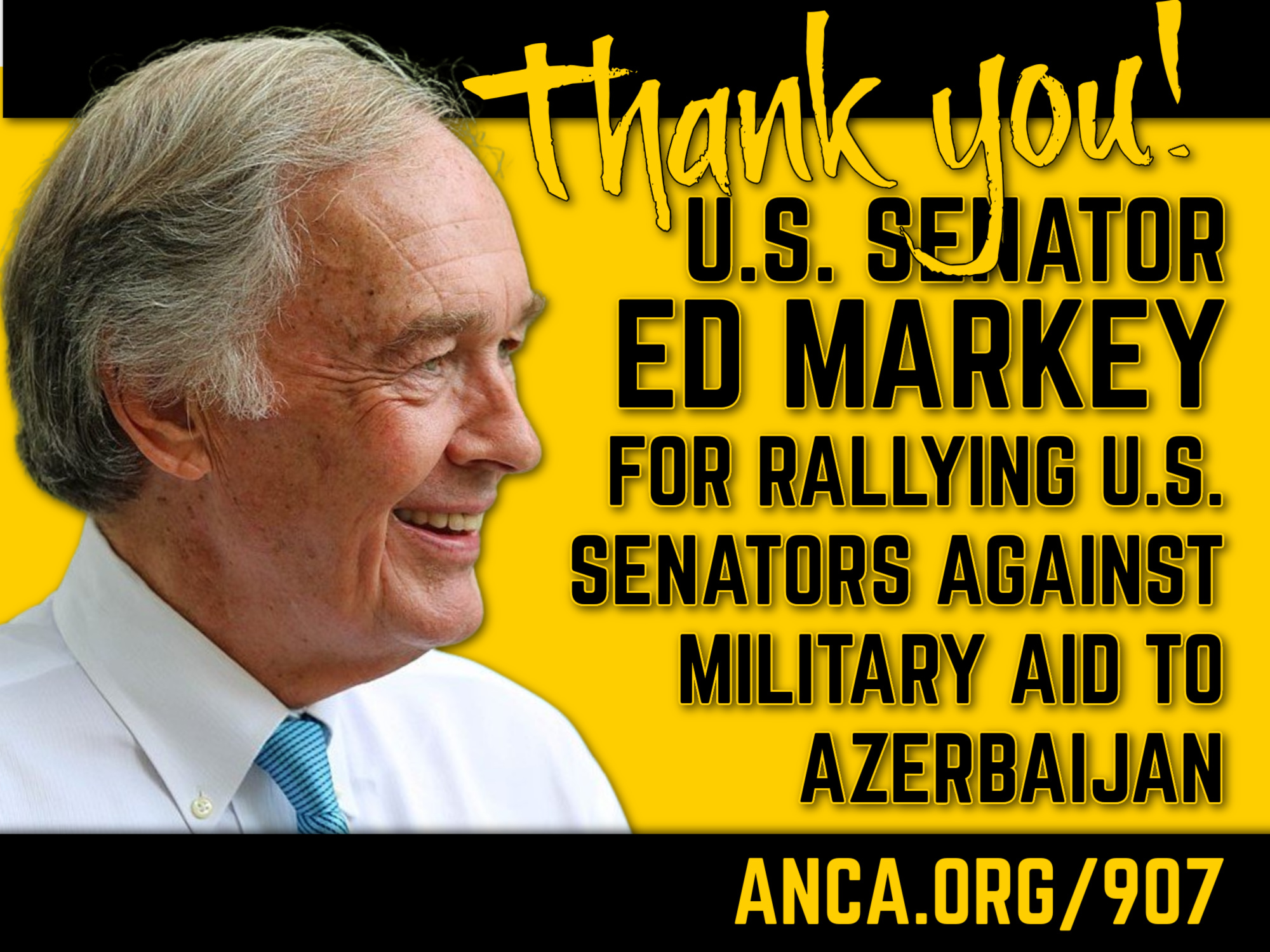 Senator Ed Markey (D-MA), a senior member of the Senate Foreign Relations Committee, today sent a letter, cosigned by seven of his colleagues, calling on the Pentagon and State Department to cease providing Azerbaijan with “United States security assistance as it continues to attack Armenia and ethnic Armenians,” reported the Armenian National Committee of America (ANCA).

Senator Markey’s initiative complements the work of Foreign Relations Committee Chairman Bob Menendez (D-NJ), who is leading legislative efforts to enforce Section 907 restriction on U.S. military assistance to the Azerbaijani government. The Markey letter states that, “in light of Azerbaijan’s recent and repeated acts of aggression toward Armenia, the United States should cease providing any security assistance to Azerbaijan until Armenia and Azerbaijan reach a permanent and lasting resolution that respects the will of the people of Nagorno-Karabakh.”

The text of the Markey letter is provided below and available at:
http://anca.org/assets/pdf/092122_Markey_StopAzerbaijanAid.pdf

Although the conflict between Armenia and Azerbaijan has spanned more than a century, Azerbaijan’s recent aggression towards neighboring Armenia and the people of Nagorno-Karabakh — including clashes in March and September 2022 — is particularly troubling. It suggests that regional instability related to the conflict in Ukraine has emboldened Azerbaijan, which has reportedly advanced as much as 4.7 miles into Armenian territory.2 This requires swift U.S. action to ensure we do not aid and abet Azerbaijan in sparking another large-scale conflagration. Azerbaijan must face the reality that there will never be a military solution that leads to peace and stability in Nagorno-Karabakh.

Section 907 of the Freedom Support Act (Pub. L. 102-511) generally prohibits most types of security assistance to Azerbaijan, absent a waiver based on a presidential certification (which has been delegated to the Deputy Secretary of State). The certification must address the need for the assistance for extremely limited purposes, which “will not undermine or hamper ongoing efforts to negotiate a peaceful settlement between Armenia and Azerbaijan or be used for offensive purposes against Armenia.” Within 60 days of exercising a waiver, the president must submit a report to Congress indicating “in detail . . . the impact of U.S. assistance on . . . the status of the military balance between Azerbaijan and Armenia.” Most recently, Deputy Secretary of State for Management and Resources Brian McKeon exercised this waiver on June 21, 2022.3 But in January 2022 the Government Accountability Office (GAO) found that, since 2014, the Department of State’s reporting to Congress had not met the statutory requirement set out above, and the Department had failed to document “how [it] determined that [its] programs would not be used for offensive purposes against Armenia.”4 Moreover, while the State Department concurred with GAO’s recommendations that it take steps to ensure both compliance with all statutory reporting requirements and documentation of its consideration of information required to exercise the Section 907 waiver, as of August 2, 2022 the Department had not yet provided GAO an action plan to address either recommendation.5

In light of Azerbaijan’s recent and repeated acts of aggression toward Armenia, the United States should cease providing any security assistance to Azerbaijan until Armenia and Azerbaijan reach a permanent and lasting resolution that respects the will of the people of Nagorno-Karabakh.

Within 14 days of receipt of this letter, please provide written responses to the following:

1) Do the Departments of State and Defense intend to continue providing any security assistance to Azerbaijan?

2) If so, has either Department conducted a recent assessment (since the last section 907 certification on June 21, 2022) to verify that ongoing assistance will not undermine or hamper ongoing efforts to negotiate a peaceful settlement between Armenia and Azerbaijan or be used for offensive purposes against Armenia? If not, we urge you to do so in light of recent developments.

3) Has either Department assessed whether any units that have received U.S. security assistance have engaged in the recent fighting? Has updated Leahy vetting taken place? 4) Has either Department complied with the GAO recommendation — with which both the Departments of State and Defense have concurred — that you “ensure that [the Departments of State and Defense] document . . . at the program level, such as in program assessments, [your] consideration of information that the Section 907 waiver provision requires to be communicated to Congress”?

Thank you in advance for your consideration of this request. We look forward to your timely response.