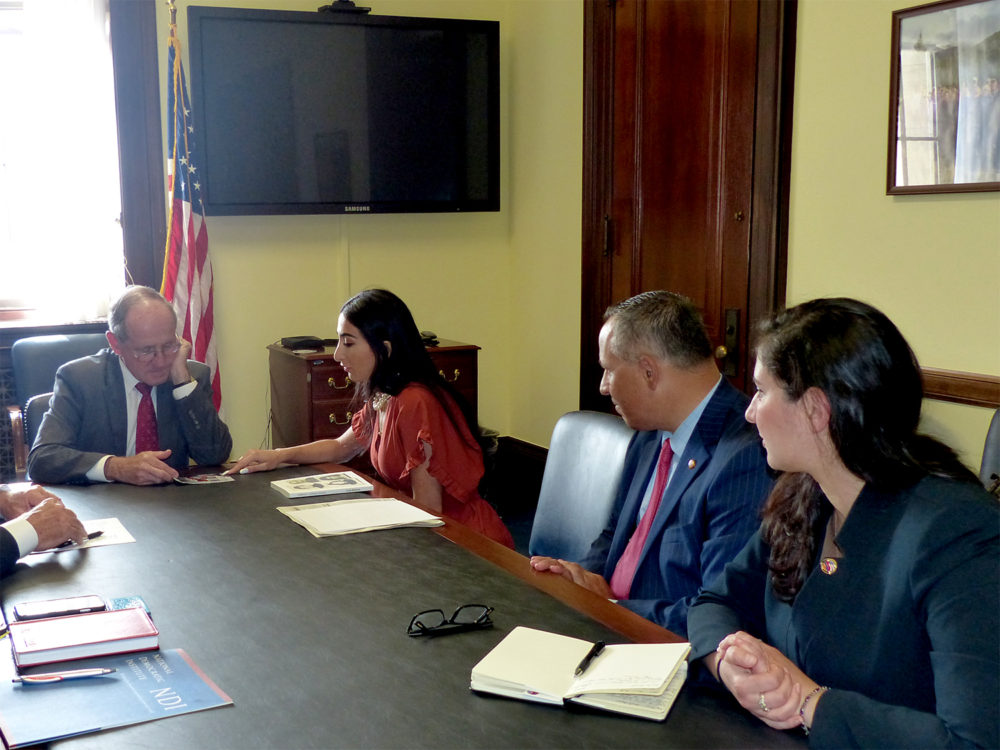 “I appreciated the opportunity to share with Chairman Risch the Idaho Armenian community’s support for a permanent U.S. policy on the Armenian Genocide – one which properly honors the heroic role that Idahoans and all Americans played in saving hundreds of thousands of orphans through the Congressionally-mandated Near East Relief effort,” said ANCA Idaho Chairwoman Liyah Babayan. “As the great-grandchild of survivors of the Armenian Genocide, forced to flee Azerbaijani government-organized violence against the country’s Armenian minority, my family and I understand first-hand the importance of properly commemorating this crime, condemning its denial, and ensuring that the lessons of the past contribute to a more tolerant future,” said Babayan.

Babayan shared the efforts of the Idaho Armenian community to commemorate the Armenian Genocide and honor the efforts of Idahoans to helped survivors of that crime. Through participation in the congressionally mandated Near East Relief (NER) program, Idahoans sponsored the care and well-being of over 2000 orphans of the Armenian Genocide, providing the cost of clothing and feeding these children. The residents of Idaho also contributed an impressive 100 tons of clothing and shoes through the designated NER district office in neighboring Washington State. A broader review of the humanitarian spirit of Idaho residents is available on the ANCA Western Region’s “America We Thank You” website: http://americawethankyou.org/wp-content/uploads/2014/08/IdahoNER.pdf

The Idaho Armenian community has established three commemorative sites in honor of the victims of the Armenian Genocide, including a plaque placed in 2006 in Ann Morrison Public Park, in Boise; a granite memorial stone placed in Twin Falls City Park in 2009; and, a memorial established in 2018 as part of the Marilyn Shuler Outdoor Classroom for Human Rights, at the site of the Idaho Anne Frank Human Rights Memorial in Boise.

Some 70 years after the Armenian Genocide, Idaho served as safe-haven for Armenians fleeing the Azerbaijani Government instigated pogroms in Baku, offering a new life and future for many, including Babayan and her family. After arriving in Twin Falls through the assistance of the CSI Refugee Program, Babayan became an entrepreneur at the age of 22, served on the Twin Falls School Board, and was the first refugee to run for Twin Falls City Council. She published “Liminal: a refugee memoir,” documenting her family’s escape from the ethnic killings of Armenians in Baku, Azerbaijan and sharing her childhood perspective of war and violence during her most formative years. In 2018, she was among 10 recipients of the Idaho Hometown Heroes Award, presented to members of Idaho communities who are extraordinarily dedicated to hard work, self-improvement, and community service.

The Washington, DC meeting was a follow up to a recent ANCA Western Region road trip to 4 states and 5 cities in the pacific northwest, including Idaho, where Sahakyan, Babayan, and ANCA Western Region Government Relations Director Serob Abrahamian shared the organization’s 360-degree policy priorities with elected officials, community groups, and local Armenian Americans.