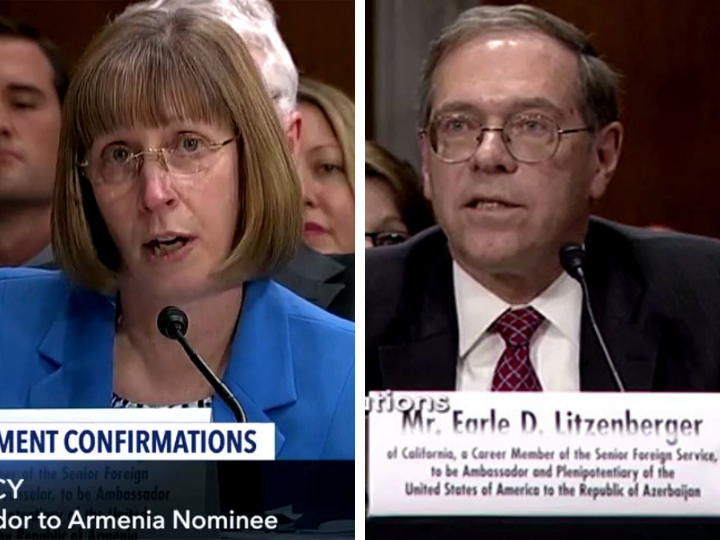 The decision comes after a two-week delay, requested by Senate Foreign Relations Committee Ranking Democrat Robert Menendez (D-NJ), allowing for Senators to seek clarification regarding a recent proposal by National Security Advisor John Bolton to sell U.S. weapons to Azerbaijan. The ANCA opposes the sale or transfer of U.S. weapons to Azerbaijan as a threat to both Armenia and Artsakh.

U.S. Ambassador to Armenia nominee Lynne Tracy’s approval comes in the wake of intense questioning by Senators Ed Markey (D-MA) and Bob Menendez regarding the U.S. policy of complicity in Turkey’s obstruction of justice for the Armenian Genocide. Ms. Tracy, while stating that “The Trump Administration and I personally acknowledge the historical facts of what took place at the end of the Ottoman Empire – of the mass killings, the forced deportations and marches that ended 1.5 million lives and a lot of suffering,” stopped short of properly characterizing the crime as genocide.

“Once again, we’re seeing U.S. enforcement of Turkey’s Armenian Genocide gag-rule undermining our ambassadors serving in Armenia, forcing them to start their tenures at a moral deficit. It is destructive to force American diplomats in Armenia – charged with building trust and fostering cooperation – to lie to the people of Armenia and the Armenian Diaspora about the very crime that nearly wiped them off the map,” said ANCA Chairman Raffi Hamparian.

“The ANCA will continue to press the Administration and Congress to reject Ankara’s veto over U.S. policy on the Armenian Genocide, while working with the new U.S. ambassador and her team to upgrade U.S.-Armenia strategic relations, including through a long overdue U.S.-Armenia Double Tax Treaty, Social Security Agreement, debt-forgiveness for reforestation efforts, and other positive initiatives,” added Hamparian.

During the October 4th confirmation hearing, Senator Menendez grilled Mr. Litzenberger about President Aliyev’s “bellicose rhetoric and sporadic outbursts of violence,” securing from the nominee a commitment that he would urge the Azerbaijani government to step back from any threatening behavior that disrupts the line of contact. Asked by Sen. Menendez whether U.S. security assistance to Azerbaijan should be curtailed based on human rights abuses, Litzenberger responded that the State Department will be “very careful to ensure that nothing that we do or provide [in terms of U.S. security assistance] to Azerbaijan undermines the effort to reach a peaceful settlement of the Nagorno Karabakh conflict.” He went on to note that U.S. security assistance to Azerbaijan will continue to include training in human rights, a point of heightened concern since the Safarov scandal.

Following the hearing, both Senator Menendez and Senator Markey submitted written questions to Mr. Litzenberger with additional inquiries regarding statements made by National Security Advisor John Bolton during his late October trip to the Caucasus calling for arms sales to Azerbaijan and Armenia.

The Senate is expected to confirm Ms. Tracy and Mr. Litzenberger as early as next week. A delay of the Senate vote to 2019 would mean starting the nomination process from square one, leaving the ambassadorial posts to the two countries vacant.