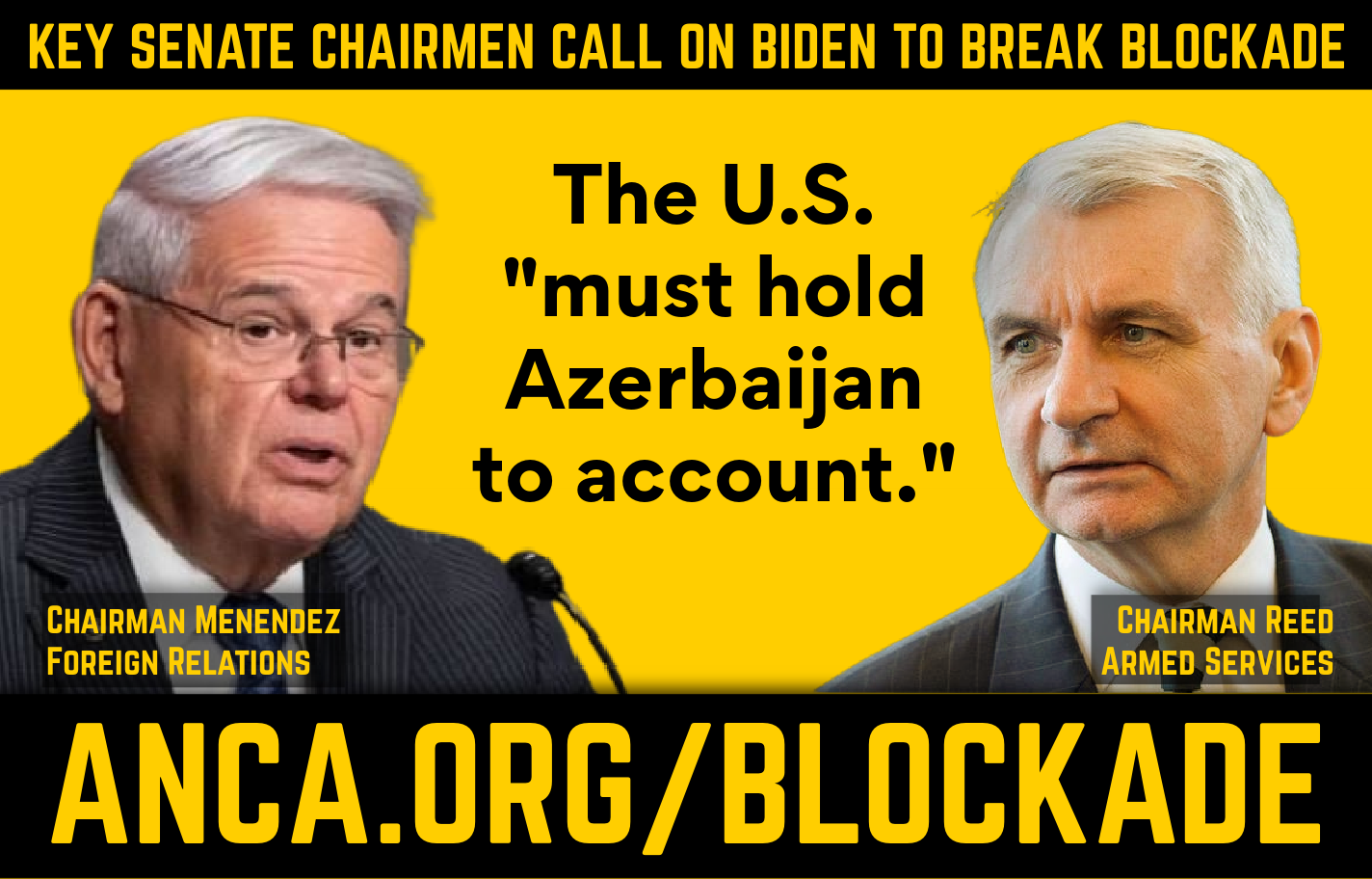 Senators Bob Menendez (D-NJ) and Jack Reed (D-RI) – the powerful chairs of the Senate Foreign Relations Committee and the Armed Services committees, respectively – today called on the Biden Administration to send emergency assistance to Artsakh (Nagorno Karabakh) and increase pressure on Azerbaijan to lift its month-long blockade of 120,000 Armenians living there, in their indigenous homeland, reported the Armenian National Committee of America (ANCA).

“We welcome today’s stand by Chairmen Menendez and Reed, and join them in calling on the Biden-Harris Administration to start actually imposing concrete costs on a country that is so openly and aggressively hell-bent on ethnically-cleansing Artsakh of its indigenous Armenian population,” said ANCA Executive Director Aram Hamparian. “Stopping Azerbaijan’s blockade needs to start with cutting off U.S. military aid to its corrupt and racist Aliyev regime.”

In a joint letter sent to Secretary of State Antony Blinken, Chairman Menendez and Chairman Reed shared their “deep concern” about Azerbaijan’s blockade, stating, “The United States cannot stand aside while the Aliyev regime callously threatens the lives of Nagorno-Karabakh’s citizens, and must hold Azerbaijan to account for blocking a civilian population’s access to food and basic necessities.”

Senators Menendez and Reed stressed, “While we welcome the recognition that Azerbaijan is responsible for the blockade that is causing the ongoing humanitarian crisis, the United States must also take action to resume the free flow of humanitarian and basic goods to this besieged population. We must support organizations working to provide relief, and work with our like-minded partners across Europe who have also expressed concern over Baku’s actions to pressure the Aliyev regime to stop this unacceptable blockade.”

The full text of the letter is provided below and available at:
https://anca.org/assets/pdf/011223_MenendezReed_ArtsakhBlockade.pdf

Since December 11th, Azerbaijan has blocked the Lachin corridor – the sole road linking Artsakh to Armenia, leaving the 120,000 Armenian population without access to food, medical supplies, fuel, and other vital humanitarian goods at the onset of winter in freezing conditions. Food and medicine are being rationed throughout the country. Azerbaijan has blocked the repair of power lines providing electricity to Artsakh, forcing rolling blackouts and, earlier today, cut fiberoptic cables to Artsakh, cutting internet and landline phone service.

Over the past month, dozens of U.S. Congressmembers have issued statements and public remarks warning of the risk of a humanitarian crisis and urging the Biden administration to take immediate action to hold Azerbaijan accountable for its aggression.  Hamparian was joined by ANCA Government Affairs Director Tereza Yerimyan and local ANCA advocates in meeting with Senate and House members on the opening days of the new Congressional session to raise awareness about the blockade and secure immediate action.

On December 21st, 29 members of Congress co-signed a letter circulated by Representative Adam Schiff to President Biden urging his administration to use all tools at its disposal to lift the blockade and hold Azerbaijan to account by immediately suspending military aid to Baku. That same week, the ANCA hosted an hour-long Congressional briefing on the blockade, where Congressional Armenian Caucus Co-Chair Rep. Frank Pallone (D-NJ) and over 50 Congressional offices were joined by Artsakh’s Human Rights Ombudsman Gegham Stepanyan, Advisor to the State Minister of Artsakh Artak Beglaryan, and the Armenian National Committee of Artsakh’s Gev Iskajyan.

While on the campaign trail, President Biden strongly criticized the Trump Administration for providing over $120 million in military assistance to Azerbaijan immediately prior to the invasion of Artsakh in September 2020. Since assuming office, however, the Biden Administration has twice reauthorized military assistance to Azerbaijan – despite Azerbaijan’s refusal to release all remaining prisoners of war, its continued destruction of Armenian cultural heritage, and its escalating encroachments along the line of contact with Artsakh and the Republic of Armenia itself.