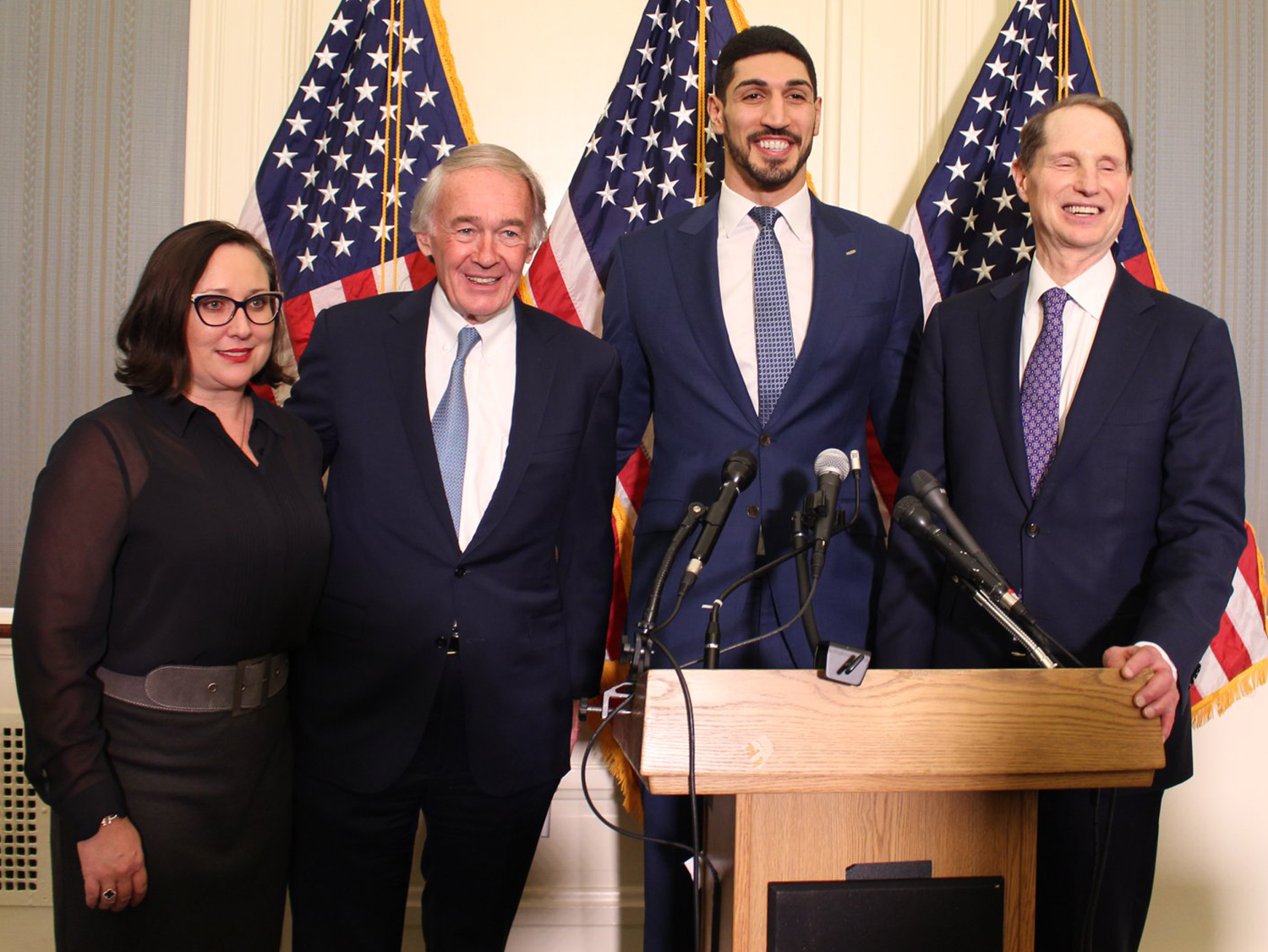 WASHINGTON, DC – On the eve of a meeting between President Trump and Turkey’s President Erdogan, key Senate and House leaders slammed the White House for welcoming the authoritarian leader, citing Turkey’s repressive policies at home and recent invasion of northern Syria among the long list of Erdogan’s rights abuses, reported the Armenian National Committee of America (ANCA).

A consistent theme in Congressional remarks was the Erdogan-ordered beating of peaceful protesters in Washington, DC during his visit in May 2017, with leaders rallying to defend the First Amendment rights of demonstrators who planned to protest at the White House.

“There’s a right that has to be protected — that’s the right of Americans to speak freely here in America and not ever feel as though they should be quiet or silenced because of threats and intimidation from a foreign government,” ANCA Executive Director Aram Hamparian told Washington, DC-National Public Radio affiliate WAMU reporter Daniella Cheslow earlier today. “The law enforcement authorities are on notice and the world is watching.”

The ANCA is teaming up with the Hellenic American Leadership Council (HALC), American Hellenic Educational and Progressive Association (AHEPA), American Hellenic Institute, In Defense of Christians, Armenian Youth Federation and American Rojava Center for Democracy for the White House protest timed with the Erdogan-Trump meeting. The protest will begin at 11:30 am and will continue through approximately 4:00pm, after which it will proceed to Sheridan Circle, the site of May 2017, attacks by Erdogan’s security detail and supporters. The Trump-Erdogan meeting schedule, released earlier this evening, is available here:

Sen. Robert Menendez: 10 Critical Questions that Turkey has Yet to Address
Senate Foreign Relations Committee Ranking Democrat Robert Menendez (D-NJ) – for the second time in two weeks – took to the Senate Floor highlighting 10 issues that should be prominent in the Erdogan-Trump meeting, including Turkey’s purchase of the Russian-made S-400 Air Defense System, the commission of war crimes in Syria by Turkish backed forces, Turkey’s occupation of Cyprus, violation of Greek airspace, and efforts to turn the Hagia Sophia Greek church into a mosque. Sen. Menendez also called special attention to the 2017 Erdogan-ordered attack on peaceful protesters, calling for the extradition of Erdogan’s security guards responsible for the attack. “While Erdogan may not believe in the right of peaceful protests in his home country, but I hope that Erdogan learns his lesson that here in the United States, the right to peaceful assembly is enshrined in our constitution and core to our democracy, and I hope that President Trump clearly reminds them of this fact,” said Sen. Menendez.

Sen. Chris Van Hollen: Erdogan’s Visit is a “Shame on the United States”
Maryland Senator Chris Van Hollen (D-MD), in a 20 minute floor statement, condemned Turkey’s recent invasion of northern Syria, including Erdogan’s use of “jihadi proxies that include a lot of Al Qaeda elements, and they are committing gross human rights abuses, including what the Trump Administration has acknowledged are war crimes.” Sen. Van Hollen emphasized the recent ISIS murder of Armenian Catholic priest Priest Hovsep Petoian and his father, who were traveling from the Syrian town of Qamishli to Der-Zor to review the rebuilding of an Armenian Catholic Church there. Referencing U.S. House passage of H.R.4695 demanding Turkey sanctions (adopted by a vote of 406-16), Sen. Van Hollen called for immediate action on that or similar measures in the Senate. He cited the importance of sending “a message to President Erdogan that while he may be going to the White House tomorrow, he does not have support in the United States Congress.”

Senators Ed Markey, Ron Wyden, Celtics Star Enes Kanter Rally Against Erdogan’s Crackdown on Free Speech
Senators Ed Markey (D-MA) and Ron Wyden (D-OR) teamed up with Boston Celtics star player Enes Kanter and the Committee to Protect Journalists to call attention to Erdogan’s “crackdown on Turkish citizens, within Turkey and abroad,” introducing legislation which states that “it is the policy of the United States to support democracy, peace, and prosperity in Turkey and to oppose the abuse of Turkish counter-terrorism authorities that target journalists, target political opponents, and dissidents and minorities including Kurds, and others who exercise their right to freedoms of expression.” During a press conference, they called on President Trump to rescind Erdogan’s White House invitation.

Video of the press conference is available here:

Texas Republicans McCaul and Crenshaw Rally for First Amendment Rights of Protesters
In the U.S. House, House Foreign Affairs Committee Ranking Republican Michael McCaul (R-TX) issued a statement noting that he is “extremely concerned by reports of violence in northern Syria committed by Turkey and Turkish backed forces, including reports of possible war crimes. Turkey must end its incursion in Syria immediately.” In addition to citing Turkey’s “numerous recent actions that harm NATO,” Rep. McCaul referenced the 2017 attacks on peaceful protesters, noting “it is imperative that all representatives of the Turkish government respect the United States’ laws, notably the right to peacefully protest. The American people will not tolerate visitors disregarding our laws and violating our founding principles on U.S. soil.”

Rep. Dan Crenshaw (R-TX) led Congressional calls on the State Department and DC Police to protect First Amendment rights during Erdogan’s Washington, DC visit, circulating two Congressional sign-on letters addressed to Cam Henderson, the State Department’s Chief of Protocol, and Chief Peter Newsham of the Metropolitan Police Department. The letters stressed that “those who wish to assemble and speak out against the Turkish regime and its leader are free to do so peacefully and without violence from President Erdogan’s security detail.”

The ANCA encouraged legislators to co-sign the Crenshaw letter, which was forwarded to the DC Police and the State Department prior to the planned Trump-Erdogan meeting at the White House.

On May 16, 2017, ANCA Executive Director Aram Hamparian videotaped the brutal attack of peaceful protesters by President Erdogan’s security detail and supporters at Washington, DC’s Sheridan Circle, across from the Turkish Ambassador’s residence, where Erdogan was scheduled to have a closed-door meeting with think tank leaders. Hamparian’s viral video showed pro-Erdogan forces crossing a police line and beating peaceful protesters – elderly men and several women – who were on the ground bleeding during most of the attack. Voice of America video of the attacks offered strong evidence that President Erdogan had personally ordered the attack.

Newly released documents reveal there was yet another altercation, this time between Turkey Foreign Minister Cavusoglu’s security detail and U.S. Secret Service and the Metropolitan Police Department at the Turkish Embassy, in which two Diplomatic Security special agents, six U.S. Secret Service officers and one MPD officer sustained multiple injuries, with at least one taken to the hospital. The Turkish Ambassador negotiated the release of two Turkey Security Detail members, with the whole group immediately taken to Andrews Airforce Base for their return to Turkey.

The documents are available here:
http://anca.org/assets/pdf/080219_StateDept_FOIA_Response.pdf

Nineteen perpetrators were indicted for the brutal beatings, which included 15 members of Turkish President Erdogan’s security detail, two Canadians, who reportedly repatriated to Turkey, and two Turkish Americans. All 19 defendants were indicted on charges of conspiracy to commit a crime of violence, with a bias crime enhancement – charges of hate crimes – which carry a maximum 15 years prison sentence. Two of those indicted – Eyup Yildirim and Sinan Narin – pled guilty to one assault charge and served one year in prison. Based on a plea deal, the hate-crimes component of the charges was removed. They were released in March, 2018.

The May 16, 2017, protest in front of the Turkish Ambassador’s residence was a continuation of a demonstration held earlier in the day in front of the White House, co-hosted by the ANCA. As President Trump met with President Erdogan, human rights and religious rights groups were joined by representatives of the Kurdish, Yezidi and Armenian communities to call attention to the Erdogan regime’s escalating repression against free press, the Kurdish and other ethnic communities, as well as Turkey’s ongoing obstruction of justice for the Armenian Genocide.