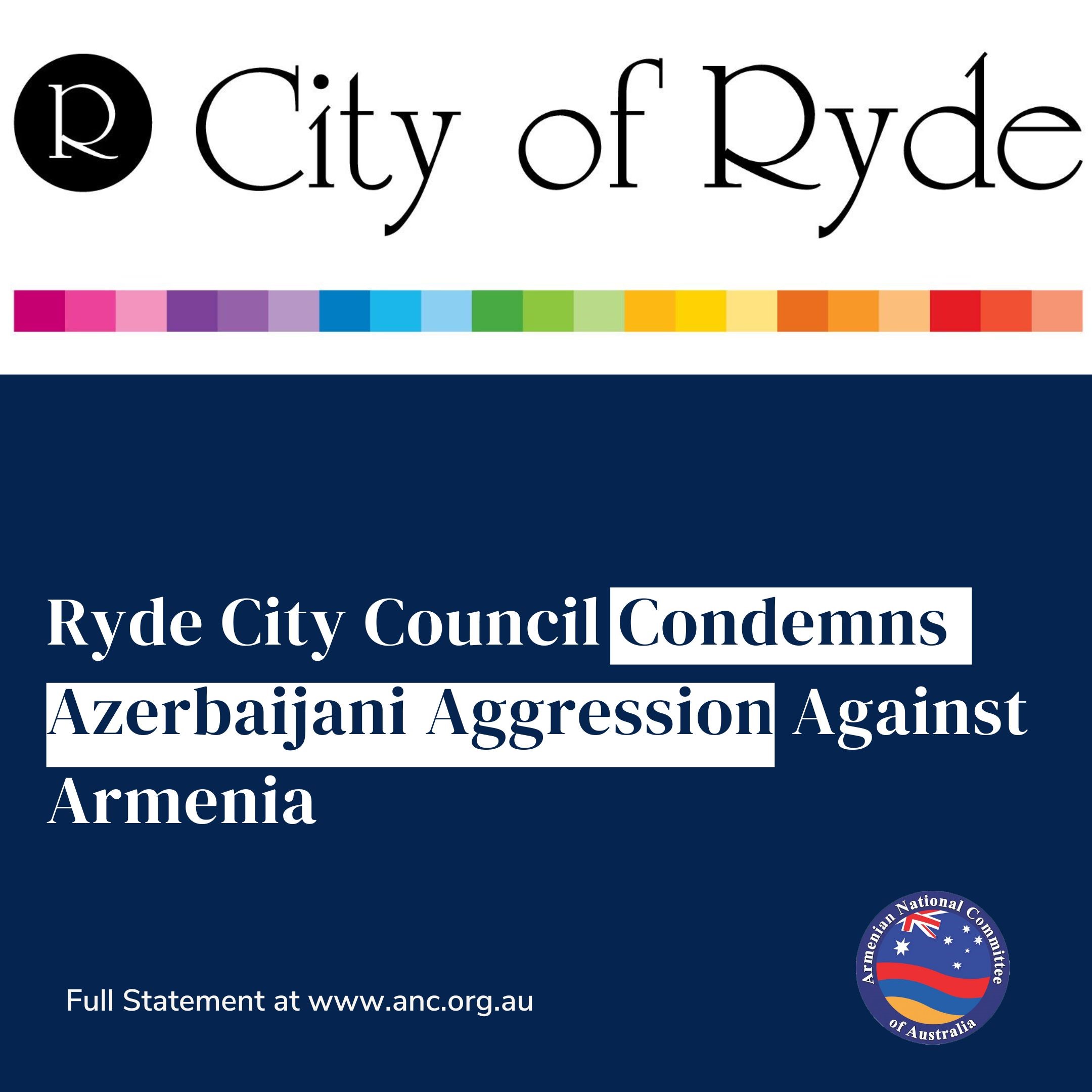 The most Armenian-populated municipality in Australia, Ryde City Council will make representations to their local Federal and State members of parliament calling on Australian Government condemnation of Azerbaijan’s assault on and encroachment into Armenia’s sovereign territories after unanimously adopting a motion standing in solidarity with the Armenian-Australian community, reported the Armenian National Committee of Australia (ANC-AU).

The Mayoral Minute motion was proposed by City of Ryde Mayor, Councillor Jordan Lane and seconded by Armenian-Australian Councillor Sarkis Yedelian OAM. It passed unanimously at the council meeting held on 27 September 2022.

The passage adopted resolved that council will write to the local Federal and State members of parliament, requesting they make representations to the Federal Government to “call on the withdrawal of Azerbaijan’s armed forces from the territories of Armenia and Artsakh, to “recognise the right to self-determination of the indigenous Armenians of the Republic of Artsakh and the independence of the Republic of Artsakh” and “call on the governments of Azerbaijan and Turkey to respect the OSCE Minsk Group peace process for the Karabakh/Artsakh conflict, in particular, the non-use of force”.

The City of Ryde has championed Armenian-Australian issues of importance since the council became the first local government body in Australia to acknowledge the Armenian Genocide in 2005. Since then the City of Ryde has also recognised the rights to self-determination of the Armenian Republic of Artsakh, established a Friendship City relationship with Artsakh’s capital, Stepanakert, and became the first municipality to raise the Artsakh flag in an unprecedented sign of solidarity for the country that was largely occupied by Azerbaijan following the 44-day war in 2020.

“We thank Mayor Jordan Lane, Councillor Sarkis Yedelian and their fellow councillors on this important show of support to the Armenian-Australian community in the City of Ryde,” Kolokossian said.

“Our community sincerely appreciates this reaffirmation of support for the Armenian-Australian community and issues that are of serious concern to us. We are hopeful that the Australian Foreign Minister will follow in the footsteps of the Ryde City Council and publicly and immediately condemn Azerbaijan’s failure to fully adhere to the Nagorno Karabakh ceasefire agreement,” Kolokossian added.

The area’s Federal Member for Bennelong Jerome Laxale, a former Mayor of the City of Ryde, has also called out Azerbaijan’s violation of Armenia’s territorial integrity via social media, noting that he too has written to the Australian Foreign Minister on this issue.

The full Mayoral Minute passed by the City of Ryde can be read below.

2. Recognises the concerns of the Armenian-Australian community regarding Azerbaijan’s continuing violation of human rights and international humanitarian law in Artsakh (Nagorno Karabakh) and Armenia;

3. Recognises the local Armenian community’s appeal to their elected representatives at all levels of government to stand for the rights of the indigenous Armenians of Artsakh (Nagorno Karabakh);

4. Write to local State member Victor Dominello MP and Federal member Jerome Laxale within the month to advocate to the Federal and State Governments to:

(a) Call on Azerbaijan to cease all hostilities against Artsakh and Armenia and honour the Nagorno Karabakh ceasefire agreement dated 9 November 2020;

(b) Call on the withdrawal of Azerbaijan’s armed forces from the territories of Armenia and Artsakh;

(d) Call on the governments of Azerbaijan and Turkey to respect the OSCE Minsk Group peace process for the Karabakh/Artsakh conflict, in particular, the non-use of force;

(e) Call on Azerbaijan to release all Armenian prisoners of war remaining in forced captivity since the cease-fire agreement dated 9 November 2020; and

(f) Condemn Azerbaijan’s desecration of ancient Armenian Christian and cultural sites in the currently occupied territories of the Republic of Artsakh.