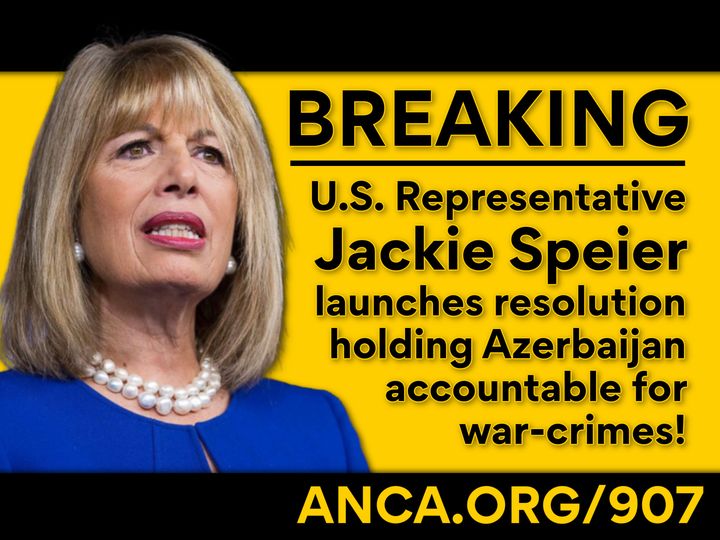 ANCA Calls for Immediate Passage of both Speier Resolution and Rep. Schiff’s H.Res.1351

“We welcome today’s introduction of Congresswoman Speier’s war-crimes resolution – alongside Congressman Schiff’s measure condemning Azerbaijan’s attacks,” said Aram Hamparian, Executive Director of the ANCA. “Both are powerful, bipartisan expressions of Congressional support for the statutory measures required to enforce Section 907 and cut-off all U.S. military aid to an oil-rich Azerbaijani government that is attacking Armenia and ethnically-cleansing Artsakh.”

“Congresswoman Speier is ending her service in the U.S. Congress in the same spirit she entered this great house of democracy – as a courageous and caring voice for the Armenian people – in her House district, across America, living in our homeland, and throughout the world,” said ANCA San Francisco Bay Area Chair Matt Senekeremian, who resides in Rep. Speier’s district. “We stand shoulder to shoulder with her in seeking to hold Azerbaijan accountable for its war crimes.”

Rep. Speier’s measure follows the introduction earlier this month of H.Res.1351, spearheaded by Rep. Adam Schiff and Congressional Armenian Caucus leaders, calling for an immediate end to U.S. aid to Azerbaijan, and condemning President Aliyev’s unprovoked attack against Armenia and Artsakh.  The measure currently has 44 cosponsors.

The ANCA is expanding its online advocacy portal – anca.org/907 – to urge passage of both H.Res.1351 and Rep. Speier’s resolution.  The portal also outlines all Congressional statements condemning Azerbaijan’s recent attacks against Armenia and Artsakh.

The text of Rep. Speier’s resolution is provided below.

Condemning atrocities and war crimes committed by the Republic of Azerbaijan.

Whereas the Universal Declaration of Human Rights Pre-amble states that ‘‘Member States have pledged themselves to achieve, in cooperation with the United Nations, the promotion of universal respect for and observance of human rights and fundamental freedoms’’;

Whereas Article 2 of the United Nations Charter directs all Member States to ‘‘refrain . . . from the threat or use of force against the territorial integrity or political independence of any state’’;

Whereas the Republic of Azerbaijan ratified the Geneva Conventions in 1993, which establish international legal standards on the treatment of civilians, prisoners of war (POWs), and soldiers who are otherwise rendered incapable of fighting;

Whereas Common Article 3 of the Geneva Conventions prohibits, among other violations, ‘‘mutilation, cruel treatment, and torture . . . [and] outrages upon personal dignity, in particular, humiliating and degrading treatment’’;

Whereas grave breaches of the 1949 Geneva Conventions constitute war crimes under both United States law and the Rome Statute, including willful killing and extrajudicial executions, torture, inhumane treatment, causing great suffering or serious injury to body or health, unlawful deportation or confinement, and hostage-taking;

Whereas this attack followed a large-scale, unprovoked invasion of the Nagorno-Karabakh region by Azerbaijan in October 2020;

Whereas, on September 28, 2020, Azerbaijani forces conducted a targeted attack on an Armenian military ambulance in which assailants shot and killed a military doctor;

Whereas, on October 14, 2020, Azerbaijani rocket artillery struck the Martakert Military Hospital in an ‘‘apparently deliberate’’ attack, according to Human Rights Watch, in which the nearest military target was over 1.5 kilometers away, and the rocket’s satellite guidance capability ensures accuracy within 10 meters;

Whereas, on October 28, 2020, an Azerbaijani artillery rocket struck the maternity ward of the Republican Medical Center, causing extensive damage;

Whereas the targeting of both military and civilian medical facilities and workers is a violation of international humanitarian law;

Whereas, in October 2020, video footage authenticated by nongovernmental organizations including Amnesty International showed Azerbaijani soldiers decapitating 2 civilians on 2 separate occasions while they were bound or pinned to the ground;

Whereas, in October 2020, Azerbaijan’s Armed Forces used white phosphorus munitions, prohibited under the Geneva Conventions, causing severe burns and the deaths of civilians;

Whereas firsthand accounts have confirmed the torture and extrajudicial killing of Armenian POWs and captured civilians held illegally under Azerbaijani detention;

Whereas, as of September 20, 2022, Azerbaijani forces have captured at least 20 additional servicemen and 3 civilian POWs;

Whereas Article 15 of the first Geneva Convention of 1949 directs parties to a conflict to ‘‘take all possible measures to search for and collect the wounded and sick, to protect them against pillage and ill-treatment, to ensure their adequate care, and to search for the dead and prevent their being despoiled’’;

Whereas, on September 16, 2022, Armenia’s Chief of Staff of the Army verified disturbing video footage showing the mutilation and desecration of a female servicemember’s body by Azerbaijani soldiers;

Whereas video footage recorded in September 2022 depicted a captured Armenian soldier receiving treatment for a shoulder wound, whose body was later returned to the Armenian Government, suggesting that he was killed in captivity;

Whereas Azerbaijan has directly targeted Armenian cultural sites as a means of further disenfranchising the Armenian people by eliminating their cultural existence;

Whereas Armenia and Azerbaijan are states parties to the Second Protocol of the 1954 Hague Convention for the Protection of Cultural Property in the Event of Armed Conflict, adopted in 1991, which reads, ‘‘The Parties to a conflict shall ensure the immunity of cultural property under enhanced protection by refraining from making such property the object of attack or from any use of the property or its immediate surroundings in support of military action’’;

Whereas Article 53 of Additional Protocol I to the Geneva Conventions prohibits committing any ‘‘acts of hostility directed against the historic monuments, works of art or places of worship which constitute the cultural or spiritual heritage of peoples’’;

Whereas a report issued by Human Rights Watch on December 16, 2020, found that the attack ‘‘appear[ed] to be a deliberate targeting in violation of the laws of war’’, and its analysis of weapon remnants found at the scene of the strike were ‘‘consistent with a munition capable of being accurately directed at a specific target’’;

Whereas a report issued on May 12, 2021, by the United States Commission on International Religious Freedom recommended placing Azerbaijan on the Department of State’s Special Watch List for engaging in or tolerating severe violations of religious freedom pursuant to the International Religious Freedom Act of 1998 (22 U.S.C. 6401 et seq.), in part due to ‘‘recent violations committed amid renewed conflict over Nagorno-Karabakh and sur-rounding territories’’, and raised serious concerns over the preservation of Armenian places of worship, cemeteries, and other religious and cultural heritage sites in the region;

Whereas international humanitarian law requires parties to a conflict to distinguish between civilian and military objects, and violations of the laws of war committed with criminal intent, either intentionally or through reckless action, can constitute war crimes;

Whereas the United States serves as a co-chair of the Organization for Security and Co-operation in Europe Minsk Group, along with France and Russia, and is committed to sustainable, long-term peace in the region; and

Whereas both Azerbaijan and Armenia are North Atlantic Treaty Organization (NATO) Partnership for Peace countries, and have committed to increase stability, diminish threats to peace, and build strengthened security relationships among NATO and nonmember countries in the Euro-Atlantic area: Now, therefore, be it

Resolved, That the House of Representatives—

(1) condemns Azerbaijan’s destabilizing actions, including the commission of war crimes, which have severely undermined the international rule of law;

(2) encourages the United States Government and international community to petition the International Court of Justice, the European Court of Human Rights, or other appropriate international tribunals to take appropriate steps to investigate any and all war crimes committed by the Azerbaijani forces at the direction of President Ilham Aliyev;

(4) condemns the intentional or reckless destruction, vandalization, or desecration of all Armenian cultural and religious heritage sites;

(5) reaffirms the United States strong support for Common Article 3 of the 1949 Geneva Convention, to which the United States is party, as well as the nontreaty-based law and longstanding norms outlined in the Geneva Protocol I and 1899 and 1907 Hague Conventions;

(6) encourages the Biden administration to explore the applicability of sanctions on Azerbaijan in response to its aggression and potential war crimes; and

(7) reaffirms its support of United States democratic partner Armenia’s sovereignty and territorial integrity, as well as that of the Republic of Artsakh, and against Azerbaijan’s military aggression and blatant violations of international laws and norms.