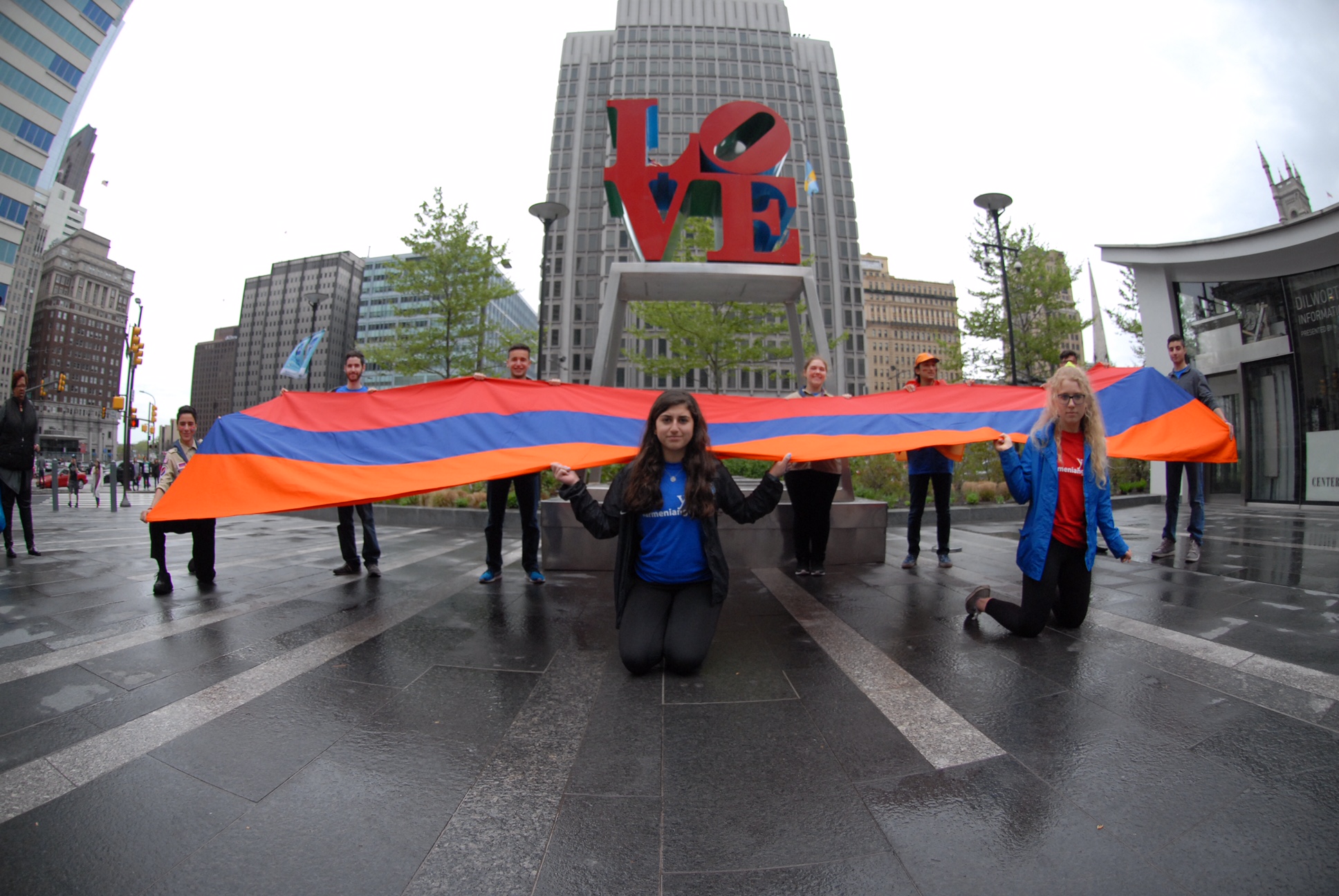 PHILADELPHIA, PA – The Armenian National Committee of Pennsylvania (ANC of PA) joined other ANCs throughout the United States in commemorating the 101th anniversary of the Armenian Genocide. On April 23 together with the Armenian Genocide Walk Committee, ANC of PA activists organized a protest in front of the Pennsylvania Museum of Archeology & Anthropology where the Turkish denialist group TAFSUS (Turkish American Friendship Society) in conjunction with the Middle East Center at the University of Pennsylvania were celebrating the “Turkish National Sovereignty Day.” TAFSUS is an organization which has declared the Armenian Genocide denial as part of its mission and objectives and continues to actively promote the denial of this international crime.

ANC of PA Chairman Dr. Ara Chalian especially noted, “As a community with strong ties to the University of Pennsylvania we find the timing offensive, disrespectful and unethical, in light of the affiliation of the event to TAFSUS”.

Over 60 participants took part in the protest with protest motorcade of 20 vehicles cloaked with the Armenian and Artsakh Republic tricolors.

After the protest, ANC of PA activists moved to the Dilworth Plaza to – along with 300 fellow Armenians and friends – participate in the traditional genocide commemoration walk organized by the Philadelphia Armenian Genocide Walk Committee.

The event, which aims to educate Philadelphians about the Armenian Genocide, was opened by Sareen Streeter and Tavit Frounjian. The program included prayers by the clergy, musical performances by the Children Choir Sisters Academy, Meghry Dance ensemble survivor stories by Lena Ohanessian, Steve Vosbikian and others. The participants placed flowers as respect to the Genocide victims as well as placed a dot on the map of Western Armenia indicating the village of their martyred ancestry.

In his remarks Steve Vosbikian mentioned that “We should not worry of the Genocide denial ads posted by Philadelphia Inquirer and others, how many prints are done by airplanes in the sky ordered by the Turkish political machine, since we the historical and intellectual debate on naming these facts as constituting Genocide is already won and now it is time for political victory when once the US fully recognizes the Genocide we will demand recognition by Turkey followed be restitutions.”

In her powerful speech ANC of PA activist Arpy Minassian said, “The barbaric nature of Turkey and Azerbaijan has not changed. There is mounting and compelling evidence daily of egregious war crimes being committed against our people. They are attempting once again to eradicate the Armenian people from their lands…it’s happening in Artsakh…now. 101 years later, we are facing the same hatred, injustice and inhumanity our grandparents did. We are here because our voice is our weapon. We stand in solidarity of our brethren who need our support both financial and moral. It is not 1915, we won’t let them take our weapons away and we won’t be silenced. It is 2016 and we are here to say that we demand recognition, we demand justice. We are Artsakh Strong…we are all one people.” She then went on to continue, “I beg you [youth] to empower yourselves, educate yourselves. Advance yourselves in medicine, law, politics, the arts, sports and business…be the best person you can be and all the while remember your foundation…your roots that go back for thousands of years. Fall in love with our Armenian history and culture. Learn, love and speak the Armenian language. Let your mind and your voice be your weapon so that one day you can continue to support our homeland and proudly declare to the world I am Armenian.”

Video coverage of the protest can be accessed here and of the walk here.

Photos from the event are available here.