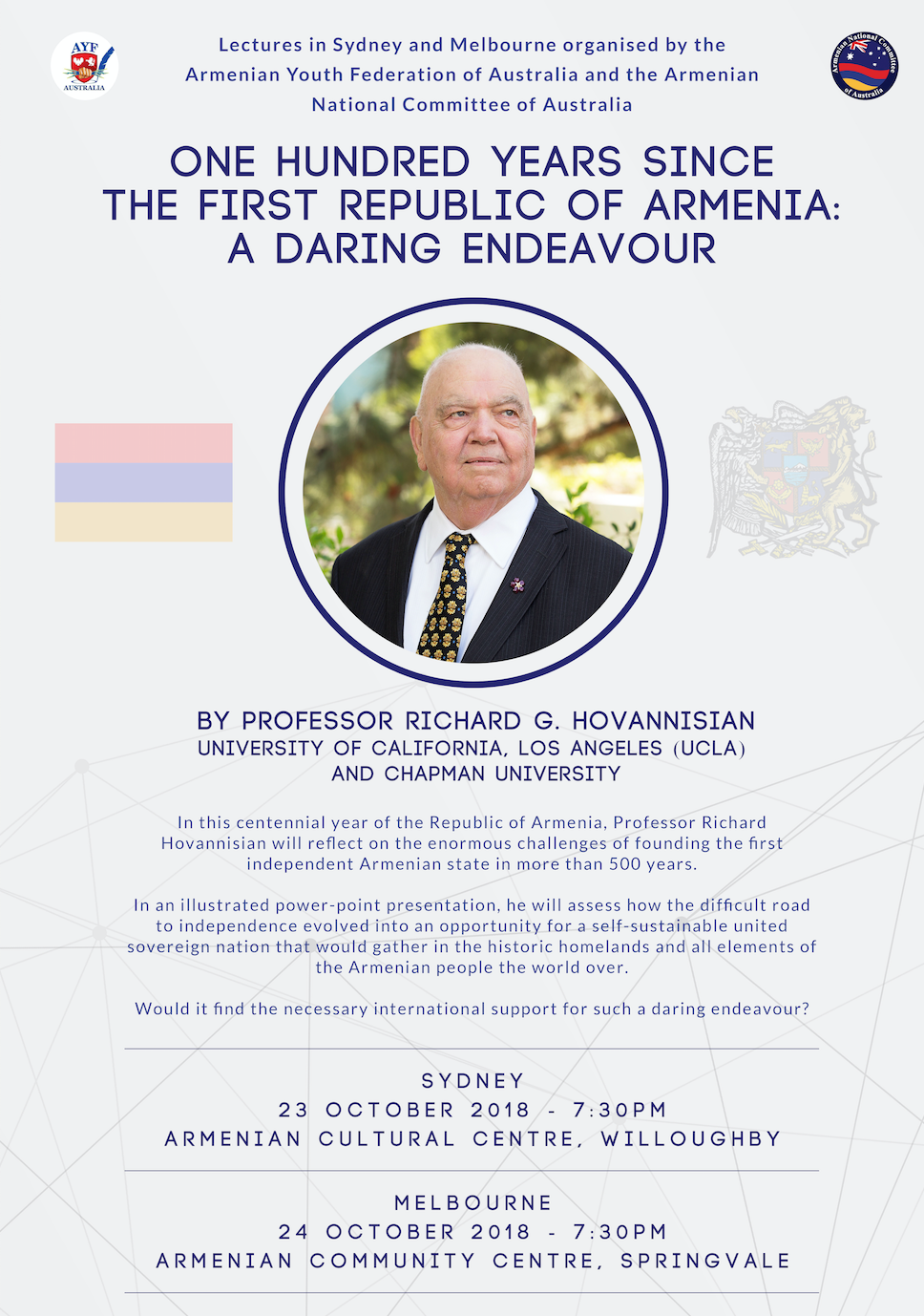 SYDNEY & MELBOURNE: Professor Richard Hovannisian will lecture on the First Republic of Armenia – in what is the 100th Anniversary year of the 1918 Republic – to audiences in Sydney and Melbourne, announced the Armenian Youth Federation of Australia (AYF-AU) and the Armenian National Committee of Australia (ANC-AU).

Professor Hovannisian, of the University of California, Los Angeles (UCLA), is considered among the foremost authorities on the subject of the the 1918-1921 First Republic of Armenia. His four-volume The Republic of Armenia stands as a foundational work in the study of modern Armenian history and as an exceptional contribution to the field of Armenian Studies.

When queried by The Armenian Weekly about the now century-old Republic, Professor Hovannisian recalled a statement by His Holiness Catholicos Vazgen I: “He said the Armenian Genocide was the crucifixion of the Armenian people… and May 28, 1918, was their resurrection.”

On Tuesday 23rd October in Sydney (at the Armenian Cultural Centre, Willoughby) and Wednesday 24th October in Melbourne (at the Armenian Community Centre/Hye Getron, Springvale), Professor Hovanissian will deliver lectures titled “100 Years Since the First Republic of Armenia: A Daring Endeavour”.

In this centennial year of the Republic of Armenia, Professor Hovannisian will reflect on the enormous challenges of founding the first independent Armenian state in more than 500 years.

The lecture will feature an illustrated power-point presentation, through which he will assess how the difficult road to independence evolved into an opportunity for a self-sustainable, united sovereign nation that would gather in the historic homelands and all elements of the Armenian people the world over.

He will investigate the question: “Would it find the necessary international support for such a daring endeavour?”

“The Armenian Youth Federation of Australia feels honoured to have a living legend of Armenian studies in Professor Richard Hovannisian visiting our shores during the year we celebrate the 100th Anniversary of Armenia’s First Independence and Republic,” said AYF-AU Central Executive Chair, Aram Tufenkjian. “We look forward to what will no doubt be very interesting lectures on the 23rd and 24th of October in Sydney and Melbourne.