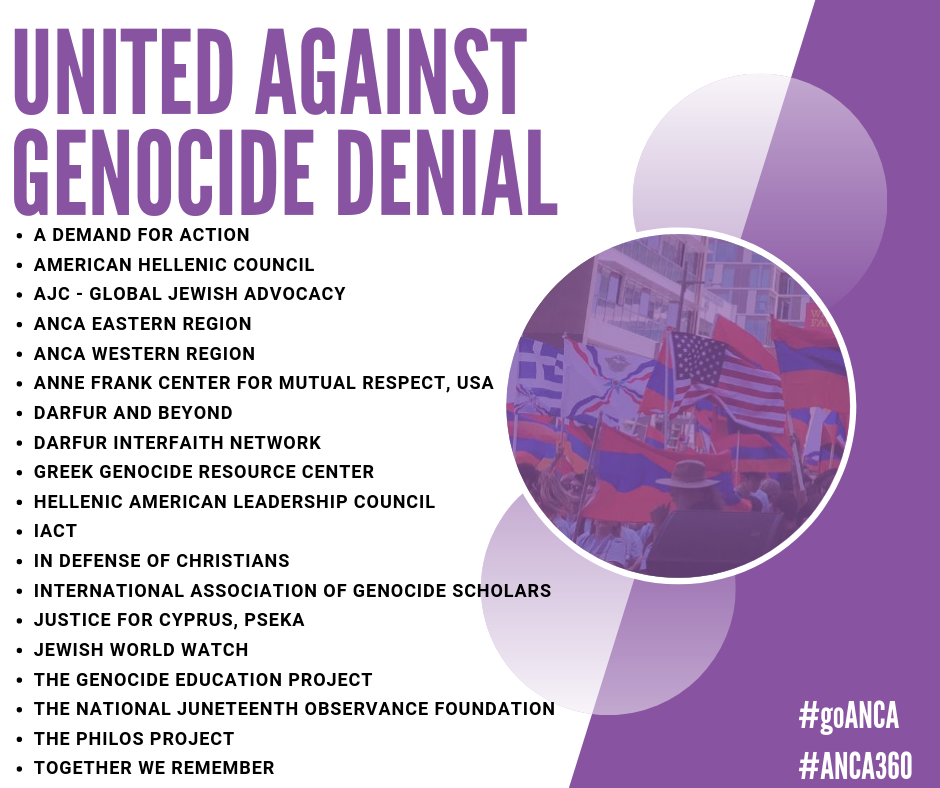 WATERTOWN, MA | GLENDALE, CA – The Armenian National Committee of America – Eastern and Western Regions, in partnership with 17 leading national anti-genocide, advocacy, and human rights organizations, led a successful letter campaign calling on more than 120 leading media outlets in all 50 U.S. states to take a zero tolerance policy for the denial of mass atrocities and crimes against humanity in general, and the Armenian Genocide in particular. The letter encouraged editorial boards to be vigilant in ensuring that their publications do not become a platform for genocide denial through the adoption of a formal policy that would not accept advertising that denies or trivializes great human tragedies, such as the World Trade Center bombings, the Holocaust, slavery in the United States, the Armenian Genocide, or Irish Famine.

The coalition letter campaign, which started in 2016, has not only raised awareness about the Armenian Genocide, but successfully prevented the publication of new Armenian Genocide denial advertisements in the media.

“We are grateful to all of our coalition partners for standing united against genocide denial,” remarked ANCA-WR Chairperson Nora Hovsepian, Esq. “While we fully support freedom of speech and expression, genocide denial cannot be dismissed as simply ‘provocative’ speech or ‘scholarly debate,’ but as deeply offensive hate speech. We are glad to see the effectiveness of this campaign and look forward to further expanding it with every year.”

“This coalition allows us to speak out against every instance of genocide denial with a forceful and unified voice. Our organizations are stronger together and this partnership furthers our efforts in ensuring truth and justice for the millions of victims who can no longer speak for themselves,” said Aram Balian, Executive Director, ANCA-ER.

This year’s coalition includes the following organizations (in alphabetical order):

The Armenian National Committee of America-Eastern Region and the Armenian National Committee of America-Western Region are the largest and most influential Armenian American grassroots advocacy organizations in the Eastern and Western United States respectively. Working in coordination with a network of offices, chapters, and supporters throughout the United States, the ANCA-ER and ANCA-WR advance the concerns of the Armenian American community on a broad range of issues.