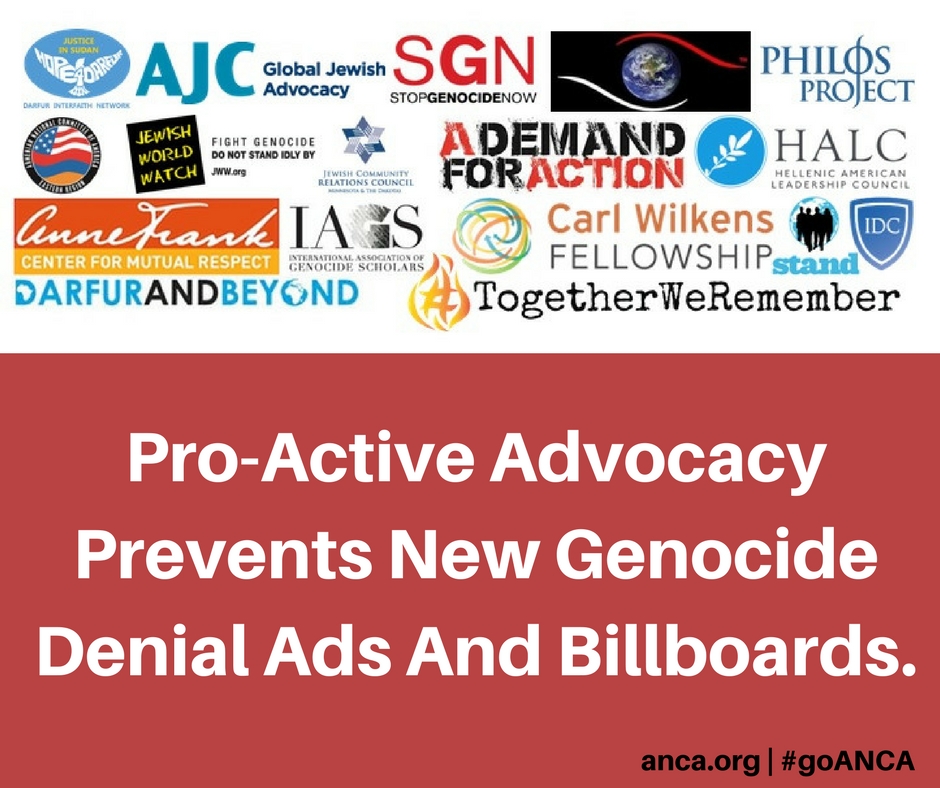 “We are thankful to our coalition partners who are principled in the matter of inadmissibility of genocide denial in any form,” said ANCA-ER Chairman Steve Mesrobian. “Genocide denial is not ‘provocative’ or ‘scholarly debate,’ but deeply offensive hate speech and we are glad to see such positive results from our ongoing anti-defamation activities. We are committed in ensuring that the memory of all the innocent victims of the Armenian Genocide, the Holocaust, and all other genocides are properly commemorated and remembered.”

A coalition of sixteen national anti-genocide and human rights organizations joined the ANCA-ER in efforts directed at major newspapers and advertising companies in the US. The initiative sought to heighten awareness of attempts to place genocide denial advertising and to urge these companies not to accept such ads. The coalition included A Demand for Action, American Jewish Committee, Anne Frank Center for Mutual Respect, Carl Wilkens Fellowship, Darfur and Beyond, Darfur Interfaith Network, Genocide Watch, Hellenic American Leadership Council, In Defense of Christians, International Association of Genocide Scholars, JCRC of Minnesota and the Dakotas, Jewish World Watch, Stop Genocide Now, STAND, The Philos Project, and Together We Remember.

In April 2016, the ANCA-ER led a successful grassroots mobilization in Illinois, New York, Massachusetts, and other areas to force media giants like ClearChannel to immediately bring down genocide denial billboards and issue an apology. After the appearance of similar advertising in The Wall Street Journal, The Chicago Tribune, and The Philadelphia Inquirer in late April 2016, the ANCA-ER assembled a coalition of 14 anti-genocide and human rights groups which called upon the newspapers to formally review their advertising polices to prevent the placement of genocide denial ads in the future. Earlier this year the ANCA-ER, together with its coalition partners, proactively reached out to media outlets across the US to remind them not to accept such advertising.